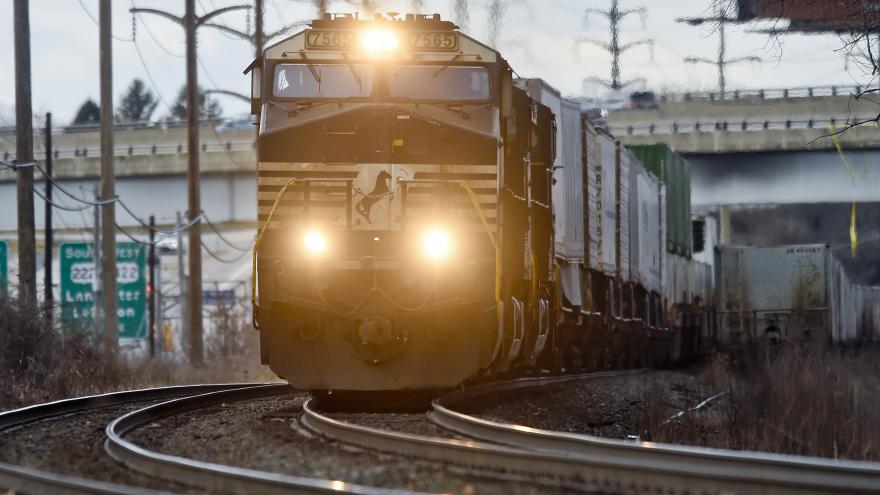 A strike would have brought nearly 30% of the nation's freight to a screeching halt.

Because those workers are covered by a different labor law than most of the nation's workers, Biden had the power to block a strike by naming a board to try to come up with a compromise labor contract.

"These disputes threaten substantially to interrupt interstate commerce to a degree that would deprive a section of the country of essential transportation service," said Biden in his order late Friday afternoon.

But the action by Biden could be only a short-term solution, setting the clock is ticking towards a possible work stoppage in 60 days.

The Presidential Emergency Board that Biden named Friday has 30 days to try to find a solution satisfactory to both sides. If either rejects it, a second 30-day "cooling off" period would begin in which the two sides try to reach a deal.

Only at the end of that second cooling-off period, which would be in mid-September, could the 12 unions that represent the railroad workers go on strike, or the nation's major railroads could lock out the workers and try to convince Congress to intervene and impose a labor deal more to their liking.

So the recent trends of supply chain woes and US labor unrest appear poisedto collide in the coming months, with US consumers paying the price in not getting the goods they want and need, or paying significantly more for whatever products are available.

The unions and their membership are angry and itching for a strike. They haven't had a raise in three years, even as several railroads, including Union Pacific, Norfolk Southern and Berkshire Hathaway's Burlington Northern Santa Fe have reported record earnings.

And an even bigger gripe: understaffing that the unions argue is creating intolerable working conditions. Employment at the nation's major railroads is down by more than 30,000, or about 20% of the workforce since the last contract was reached in 2017.

"We're in the third year of negotiations and we're going nowhere," said Dennis Pierce, president of the Brotherhood of Locomotive Engineers and Trainmen. "The members are exasperated and angry like I've never seen them."

He said many employees are required to be on the job or on call to report to work on short notice seven days a week due to inadequate staffing levels.

"They're losing employees at an alarming rate because they're not treating them as if they want to keep them," said Pierce. "Now they're having a hell of time hiring. The word has gotten out these are not attractive jobs."

He added that the typical 3% annual increases in previous contracts won't be acceptable this time, especially with some inflation rates of more than 10%.

The National Railway Labor Conference, which negotiates on behalf of management for all the major railroads, says it won't comment on the details of bargaining, and expects any agreement will include retroactive pay increases for 2020 and 2021 as well as significant increases for this year. The average pay for union members at the railroads is $130,000, according to management.

It's not just unions that are fed up with railroad management.

Shippers, who depend on railroads to move their goods, including many of the nation's largest companies, are on record complaining about the quality of railroad service in testimony and filings to the Surface Transportation Board, one of the federal agencies that oversees railroads.

"ADM is not in a position to tell each railroad how many crew or locomotives they should have, what equipment or other investments they should make, or what operating systems they should employ for their business," said the company. "ADM simply needs to know that whatever systems are implemented by the railroads, the railroads will be able to meet our service requirements."

Experts agree that both labor relations and service levels have reached all time lows, and are a major factor in the nation's current supply chain woes.

"Staffing issues right now are probably the premier problem for the rail industry," said Pete Swan, professor of logistics and operations management at Penn State. "It takes many months to train an engineer. They've been caught flatfooted. I would tell you labor relations in rail industry are the lowest I've ever seen, and they've been pretty bad before."

Proposal to have single-worker trains

Management is requesting permission to remove one of the two employees thatcurrently work on each train, a conductor, in most of the country. While they don't drive the train as engineers do, they are qualified engineers who can take over in an emergency and can serve as a second set of eyes while the train is under power.

Management argues the current safety equipment designed to stop a train if it is going too fast or is out of position makes the second person redundant. It would be more efficient to redeploy those workers to fixed positions on the ground to take care of many of the same tasks

Not surprisingly, the unions call that proposal a non-starter, as well as a major safety risk to the staff and the communities that trains pass through.

The gap between labor and management positions suggests there won't be an agreement during the 30 days the PEB is in place as both parties try to find a solution, or in the 30-day cooling off period that follows. At that point it could be up to Congress to try to reach an agreement on a contract it can impose on the two sides.

But finding common ground on almost anything in Congress has proven difficult, especially with the midterms looming.

"We're in an election cycle. No one wants to be blamed for shutting down supply chain," said Pierce.

If Congress can't pass legislation during the 30-day cooling off period, there very well could be a strike or lockout that would bring freight train service to a halt nationwide.

The unions say the limits on strikes by its members have made it more difficult to get a deal that would be better for employees, shippers, consumers and eventually even the railroads, which unions argue could be handling more freight if they were better staffed.

"The members want to strike. No one should dismiss that," said Pierce. "And I think many of the shippers would like to see the railroads get poked in the eye if it resolves this. If unions had the right to do a strike, we would have had a deal back in 2019."