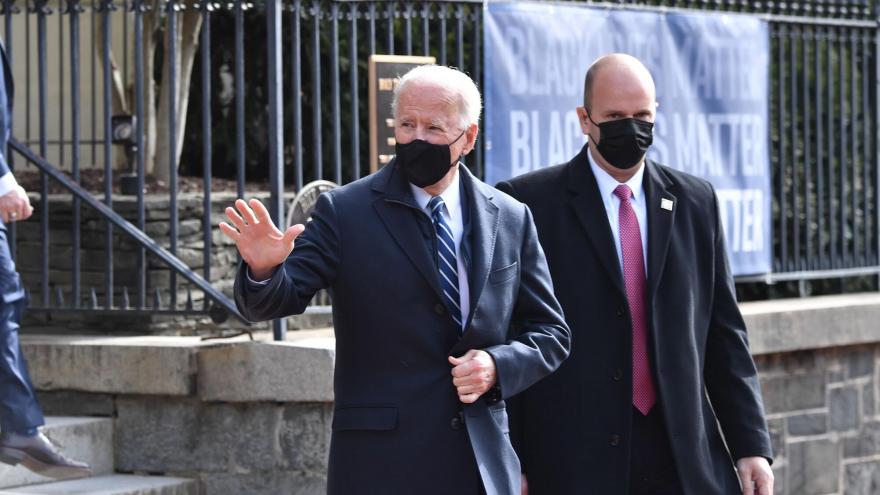 Biden is the second Catholic president in US history, and weekly Mass is expected to be a fixed part of his schedule. That's a level of devotion to regular religious services not seen from recent presidents, who were professed Christians but intermittently attended church or worshipped privately while in office.

And while it's unclear whether he will adopt a permanent parish in Washington during his term, Biden's churchgoing will provide a window into how his spiritual side aligns with his politics.

Biden was inside Holy Trinity for at least 35 minutes and his grandchildren, Maisy and Finnegan, and his son, Hunter, accompanied the President to Sunday's service. Asked how the service was, he replied, "Lovely."

Biden's motorcade then made a stop at Call Your Mother, a popular bagelry-deli in the area, to pick up an order. Call Your Mother retweeted a video of the motorcade on Sunday and called the visit a "GREAT Sunday surprise."

"Thrilled to have an admin again who will love all that DC has to offer — starting with sesame bagels!! Come back anytime @JoeBiden," the post said.

Catholicism has been an integral part of Biden's life, who has been a regular at Mass since childhood and attended Catholic schools. He married his late first wife, Neilia, in a Catholic church and peppers his political speech with quotes from Scripture, Catholic hymns and references to the nuns and priests he learned from in school.

He frequented Holy Trinity during his time as vice president to former President Barack Obama. The church -- the oldest Catholic church in Washington, according to Holy Trinity -- was also regularly attended by the first US Catholic president, John F. Kennedy.

The morning of his inauguration, Biden attended a service at the Cathedral of St. Matthew the Apostle in Washington, DC, with all four congressional leaders.

This story has been updated with additional details of the President's Sunday outing.