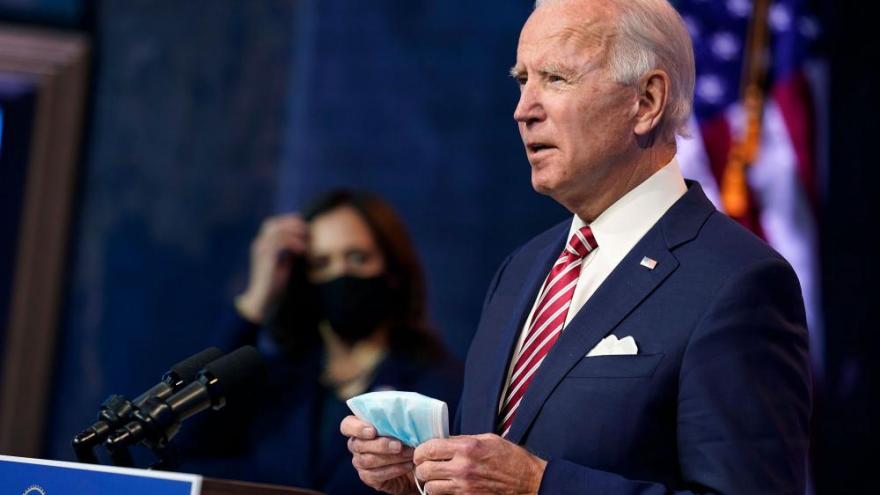 (CNN) -- President-elect Joe Biden has assembled a team that will lead the confirmation battles for his nominees in the Senate.

The team's formation comes as the former vice president prepares to build out his Cabinet in the coming weeks. The confirmation process could mark the Biden team's first political showdowns in the Senate, including with Senate Majority Leader Mitch McConnell if Republicans hold onto their majority in the January 5 Georgia runoffs.

Confirmations teams typically guide nominees through the process, including preparing for hearings, navigating meetings with senators, and handling incoming pressure from outside groups. The Biden team is also preparing a possible public relations blitz to "introduce nominees to the American people," a transition official said, including the possibility of having Cabinet nominees speak publicly before their confirmation hearings take place.

Jen Psaki, who served as communications director in President Obama's White House, will oversee the nominations team, according to a list provided to CNN by a transition official. Olivia Alair Dalton, a former aide to Biden in the Senate, will lead the communications strategy, and Reema Dodin, the floor director for Senate Democratic Whip Dick Durbin, will lead legislative strategy. Jorge Neri, a former senior adviser to Biden's campaign, will be deputy outreach director for confirmations.

The team is also coordinating with Stephanie Valencia, who is handling the Biden transition team outreach, and Louisa Terrell, who is in charge of congressional affairs for the transition.

With his picks expected in the coming weeks, Biden is taking a characteristically deliberative approach in filling out his Cabinet. Biden also has a deep understanding of the confirmation process having served in the Senate for decades.