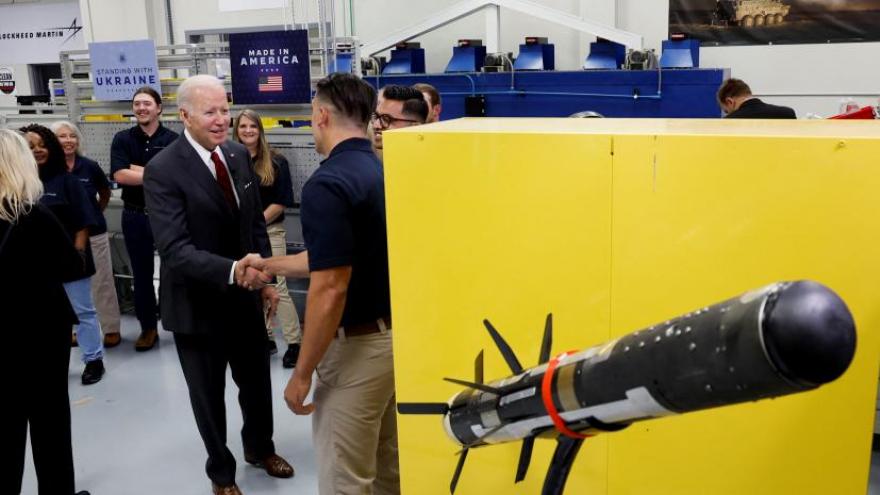 U.S. President Joe Biden tours a Lockheed Martin weapons factory in Troy, Alabama, U.S. May 3. Biden has asked Congress to amend the Immigration and Nationality Act to make it easier for highly educated Russians to obtain visas to work in the United States, according to a section of the White House's Ukraine supplemental budget request submitted to lawmakers last week and reviewed by CNN.

(CNN) -- President Joe Biden has asked Congress to amend the Immigration and Nationality Act to make it easier for highly educated Russians to obtain visas to work in the United States, according to a section of the White House's Ukraine supplemental budget request submitted to lawmakers last week and reviewed by CNN.

The request, if enacted, would allow Russians with a masters or doctoral degree in the fields of science, technology, engineering or math to apply for a visa without first obtaining an employer sponsor in the US.

The amendment would also require the Department of Homeland Security "to expedite consideration of such applications," the document says, "as appropriate" and with the necessary vetting.

The administration explained in the document that the authority "would help the US attract and retain Russian STEM talent and undercut Russia's innovative potential, benefiting US national security." The authority would expire four years after the date that it is enacted, according to the document.

"We want to seize on this opportunity to provide top Russian scientists with a clear pathway to leave Russia for good and come to the United States, robbing Putin of his best innovators and his best brains," a White House official told CNN. "We believe this will advance our own national security and bolster our economy by adding highly skilled individuals to our workforce, and that it will also weaken Russia's innovation base while simultaneously strengthening our own."

The official noted that there is precedent for this request, most recently the Soviet Scientists Immigration Act of 1992 that also provided top Soviet scientists with a pathway to immigrate to the United States without a sponsoring employer. That proposal allowed about 450 Russian scientists to emigrate to the US, the official said, and the administration believes the number this time around will be "much higher given the current political climate."

Tens of thousands of highly educated Russians have reportedly fled Russia since Russian President Vladimir Putin ordered an invasion of Ukraine just over two months ago. The Biden administration is hoping to take advantage of that brain drain and lure some of those workers to the US, officials said.

The document says the visa changes would apply to Russians with degrees in fields including, but not limited to: hypersonics, advanced nuclear energy technologies, advanced missile propulsion technologies, directed energy, artificial intelligence, cybersecurity, and space technologies and systems.

The US has already sought to curtail Russia's ability to remain technologically competitive by imposing severe export restrictions on materials like semiconductors that are found in thousands of electronic products.

Bloomberg first reported that the administration was weighing loosening the visa restrictions.