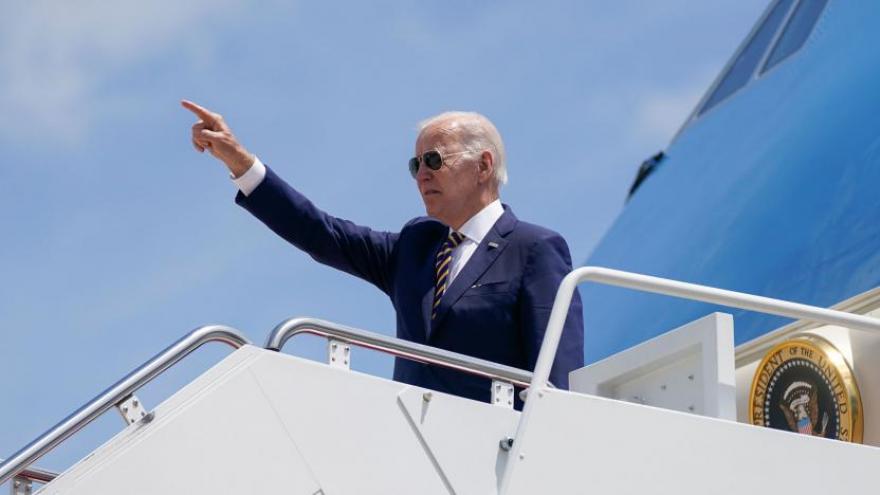 President Joe Biden gestures as he boards Air Force One for a trip to South Korea and Japan on May 19, in Andrews Air Force Base, Maryland.

(CNN) -- President Joe Biden arrived here Friday on a mission to reaffirm a key alliance at an uncertain moment in East Asia, punctuated by growing warnings from US intelligence that North Korea may conduct a missile test during the President's visit.

Even as the war in Ukraine has preoccupied Washington -- and took up the first half of Biden's day before he departed for Asia -- provocations from North Korea have intensified and China continues flexing its economic and military might.

Biden wants to show his top partners here he can focus both eastward and westward, and that the United States has resources to help uphold democracy and sovereignty around the world.

"So much of the future of the world is going to be written here, in the Indo-Pacific, in the next several decades," Biden said, reiterating his desire to continue focusing on Asia.

"We're standing at an inflection point in history, where the decisions we make today will have far-reaching impact on the world we're leaving to our children tomorrow," Biden said.

He was speaking at a Samsung plant making semiconductors, critical components for a myriad of products. The Biden administration has worked over the past months to alleviate a shortage of semiconductors that has hurt American manufacturing, including cars and trucks, in part because shipments of some Chinese-made components were stalled due to Covid-19-induced factory shutdowns. Biden has prioritized separating American industry from Chinese supply chain snags, both through domestic production and sourcing key parts outside China.

In brief remarks after a tour of the factory, Biden tied together the chip shortage with the war in Ukraine, saying the US and its allies must reduce their dependence on essential items from autocratic regimes.

"Putin's brutal and unprovoked war in Ukraine has further spotlighted the need to secure our critical supply chains so that our economy, our economic and our national security are not dependent on countries that don't share our values," Biden said, calling on the US to step up its own chip production, aided by pending legislation in Congress.

Earlier, Air Force One touched down at Osan Air Base, an American military installation outside the capital Seoul, after a lengthy journey from Washington.

The stakes of Biden's trip have been ratcheted higher by the threat of a nuclear or missile test from North Korea. The prospect looms over Biden's stop in Seoul, where he plans to further tout economic partnership and security ties alongside the country's newly elected President.

US intelligence assesses that North Korea may now be getting ready to fuel an intercontinental ballistic missile, one of the key final stages in preparing for a test launch, according to a US official familiar with the latest information. A possible fueling of a missile would mean that North Korea could conduct a test launch while Biden is in South Korea. Once a missile is fueled, launch usually comes quickly due to the risk of leaving a missile full of thousands of pounds of fuel on a launcher.

Biden and his aides have prepared contingencies should Pyongyang launch a long-range missile or conduct a seventh underground nuclear test, as US officials have warned. American officials have briefed their allies on the various possibilities. And should a test proceed, Biden and his South Korean counterpart have made plans for how they would jointly demonstrate a show of resolve.

"We know what we will do to respond to them. We have communicated with not just our allies, but also with China. And this could cause the United States really to increase our fortitude in terms of defending our allies and cause adjustments to the way that our military is postured in the region," national security adviser Jake Sullivan told reporters aboard Air Force One as Biden made his way to Asia.

Such a scenario would only underscore the serious threat North Korea continues to pose to the region, even as the world's -- and Biden's -- attention has been directed in recent months toward Russia's invasion of Ukraine.

Biden departed for Asia midday Thursday after meeting the leaders of Finland and Sweden at the White House to discuss their emergency applications to join NATO, a reflection of how the crisis has consumed much of his schedule. The lengthy trans-Pacific journey, the longest of Biden's presidency so far, included a refueling stop in Alaska.

It's Biden's first time in Asia since taking office a year and a half ago. Covid-19 and other foreign crises have kept him away until now, but the simmering problems of Chinese expansionism and North Korean posturing remain major concerns for his administration.

Later on his trip, Biden is planning to unveil a new Indo-Pacific economic plan that spells out his trade ambitions in the region. He faces deep skepticism after his predecessor withdrew the US from the Trans Pacific Partnership, a massive trade pact negotiated in the Obama administration; leaders have wondered how durable Biden's plan can be should Trump or another Republican take office in 2025.

Biden will visit Japan after a three-day stop in Seoul. Officials said he aimed to emphasize the war in Ukraine had only strengthened the American position in Asia by demonstrating the strength of US alliances.

"President Biden has rallied the free world in defense of Ukraine and in opposition to Russian aggression. He remains focused on ensuring that our efforts in those missions are successful. But he also intends to seize this moment -- this pivotal moment -- to assert bold and confident American leadership in another vital region of the world: the Indo-Pacific," Sullivan said Wednesday.

Still, the potential for a provocative North Korean test during Biden's trip was a sign that his administration's efforts to engage Pyongyang in diplomacy have so far yielded little. Biden's aides have tried unsuccessfully to restart talks with the North, receiving virtually no response to their outreach.

At the same time, the White House has mostly ruled out direct talks between Biden and Kim Jong Un, the country's dictator, who met Biden's predecessor three times — including on the North Korean side of the Demilitarized Zone.

Biden won't visit the DMZ on his trip, unlike several of his recent predecessors. White House aides said they believed it was more important for the President to visit with US troops stationed in South Korea during his visit.

But he was expected to discuss the North Korean situation when he meets for bilateral talks Saturday with the new South Korean President Yoon Seok-youl, including new steps toward deterring the unprecedented level of provocations.

Yoon, a former prosecutor who has never held elective office before, campaigned as a staunch supporter of the US alliance, and has signaled his intent to expand South Korea's foreign policy engagements beyond just dealing with the North. That's welcome news for Biden, who is looking to strengthen alliances in Asia as he looks to counter China's economic and territorial ambitions.

That has been a central facet of his foreign policy, but one that's been obscured somewhat by the Ukraine war. In South Korea, administration officials see a new leader eager to cooperate with Washington on a range of issues and an advanced economy that could supplant current US reliance on China for certain critical technologies.

This story has been updated with further developments on Friday.