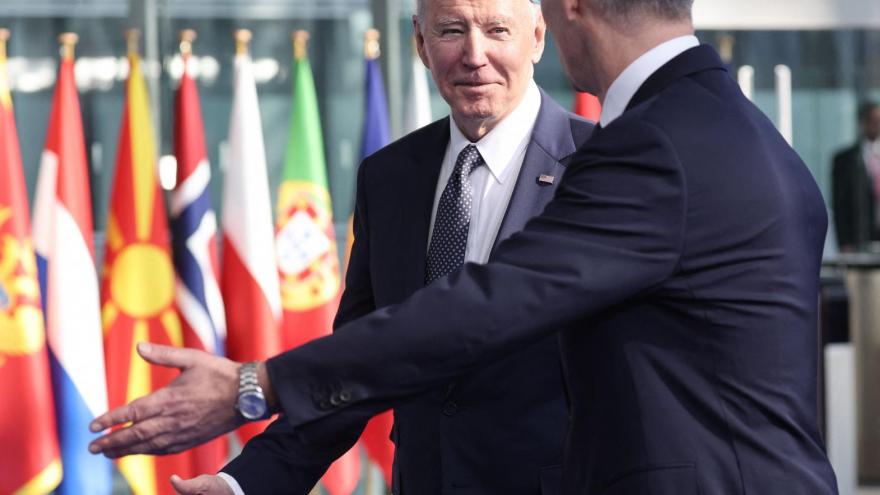 (CNN) -- President Joe Biden told American troops on a deterrence mission near the border with Ukraine that the consequences of the raging conflict 50 miles away could extend around the world.

"What's at stake (is) not just what we're doing here in Ukraine to help the Ukrainian people and keep the massacre from continuing, but beyond that what's at stake is what are your kids and grandkids going to look like in terms of their freedom?" Biden told US service members from the 82nd Airborne Division, who have been deployed along NATO's eastern edge as a visible deterrent to Russian President Vladimir Putin.

"What you're engaged in is much more than whether or not we can alleviate the suffering of Ukraine," he went on. "We're in a new phase, your generation. We're at an inflection point."

It was a sweeping view of the war underway in Ukraine, which has jolted the west into unprecedented cooperation while sending millions fleeing their homes, mostly into Poland. Biden was able to witness both of those factors at close range during his visit to Rzeszow, which has acted as a staging area for Western military assistance to Ukraine while also serving as a waypoint for people fleeing the violence.

As Biden was arriving, anti-aircraft missiles could be seen on the grounds of the airport. Later, he met with aid workers to hear their accounts of helping alleviate the humanitarian crisis, which he said was put in motion by a leader, Putin, whom he again described as a war criminal.

Speaking during a roundtable focused on the refugee issue, Biden said he would have preferred to see the crisis from an even closer perspective but was prevented by security concerns.

"They will not let me, understandably, I guess, cross the border and take a look at what's going on in Ukraine," he said. The White House has said it did not explore a visit to Ukraine.

Biden told the US troops, assembled inside a stadium, that their mission was more than simply sending a message to Russia. Instead, he said they were acting as a signal to all the world's autocrats.

Echoing the expansive foreign policy frame he's used previously, but with a Russian twist, he said the assembled US service members were "in the midst of a fight between democracies and oligarchs."

Biden is in Europe this week on a hastily arranged bid to reinforce Western cooperation and reassure countries the United States will help protect their security. Before he arrived in Poland, he announced a new initiative with the European Union meant to deprive Putin of energy profits that Biden said are used being to fuel Russia's war in Ukraine.

Speaking in Brussels alongside European Commission President Ursula von der Leyen, Biden said Russia was using its supply of oil and gas to "coerce and manipulate its neighbors." He said the United States would help Europe reduce its dependence on Russian oil and gas and would ensure the continent had enough supplies for the next two winters.

Biden arrived midday Friday in Poland, where the regional security issues and the humanitarian catastrophe that he'd discussed during a series of summits a day earlier were put into sharper focus.

Noting the pizza the soldiers were eating for lunch looked appetizing, Biden took a slice for himself and sat down to chat.

The President has made clear that US troops won't travel into Ukraine to directly fight Russian forces, suggesting such a step would lead to World War III. But he has ordered new rotational deployments along NATO's eastern edge to demonstrate American commitment to protecting the alliance.

He was greeted in Poland by President Andrzej Duda, who has called for a more permanent NATO defense posture in the country along with an international peacekeeping force in Ukraine. US officials have not warmed to the peacekeeping proposition, suggesting it could violate Biden's red line of keeping US troops out of the conflict.

Speaking to US service members, Biden hailed the Ukrainian people, whom he said were demonstrating admirable resolve.

"The Ukrainian people have a lot of backbone, a lot of guts. I'm sure you're observing it. And I don't mean just a military," he said.

He went on to make an apparent slip by suggesting the gathered US troops would see the Ukrainians in action themselves.

"The average citizen, look at how they're stepping up. And you're going to see when you're there, I don't know if you've been there, you're going to see women, young people, standing in the middle of the damn tank, saying, 'I'm not leaving. I'm holding my ground,'" he said.

Biden and his administration have been adamant that US service members will not be deployed to Ukraine and all US armed forces who had been in the country had been removed ahead of the Russian invasion. A White House spokesperson later said, "The President has been clear we are not sending US troops to Ukraine and there is no change in that position."

Later, while receiving a briefing on the humanitarian response to the crisis in Ukraine, Biden said the images coming from the country are "something out of a science fiction movie."

"Those little babies. Little children. You're looking at mothers -- you don't have to understand the language they speak -- you see in their eyes pain and I mean literally pain watching their children. I don't think there's anything worse for a parent than see their children suffering," Biden said.

Poland, which borders Ukraine to the west, has registered more than 2 million Ukrainian refugees crossing into the country. However, the number of refugees staying in Poland is lower, with many continuing on in their journey to other countries.

Earlier this month during Vice President Kamala Harris' trip to Poland, Duda personally asked the vice president to speed up and simplify the procedures allowing Ukrainians with family in the US to come to the country. He also warned Harris that his country's resources were being badly strained by the influx of refugees, even as Poland welcomes them with open arms.

The White House says that since February 24, the US has provided more than $123 million to assist countries neighboring Ukraine and the European Union to address the refugee influx, including $48 million in Poland.

And Biden announced this week the US would admit up to 100,000 people fleeing violence in Ukraine through a variety of migration channels.

New steps to wean Europe from dependence on natural gas

As Biden was departing Brussels earlier, he sought to smooth over one of the biggest cracks in Western unity in punishing Russia: Europe's dependence on Russian energy imports, which have continued to provide billions of dollars to Putin, even as Biden seeks to shut him off from the global economy.

Biden and von der Leyen announced a joint task force meant to help wean Europe from its dependence on Russian oil and gas. The panel, chaired by representatives from the White House and the European Commission, will be aimed toward finding alternative supplies of liquefied natural gas (LNG) and reducing overall demand for natural gas moving forward.

"It's going to take some time to adjust gas supply chains and infrastructure that (were) built for the last decade so we're going to have to make sure the families in Europe can get through this winter and the next while we're building an infrastructure for a diversified, resilient and clean energy future," Biden said.

Europe's dependence on Russian gas and oil has proved a major sticking point in western efforts to punish Moscow for its invasion of Ukraine. While the US banned Russian energy imports, Europe found it far more difficult to cut off its supplies.

"I know that eliminating Russian gas will have costs for Europe, but it's not only the right thing to do from a moral standpoint, it's going to put us on a much stronger strategic footing," he said.

The US will work toward supplying Europe with at least 15 billion cubic meters of liquefied natural gas in 2022, in partnership with other nations, the White House said. The group will also work toward reducing greenhouse gas emissions through reducing methane emissions and using clean energy to power operations.

Senior administration officials said the 15 billion cubic meters of liquefied natural gas come from multiple sources, including the United States and nations in Asia. But officials did not have an exact breakdown on where the gas was coming from. The announcement Friday was the culmination of a US effort over the past months to identify alternate sources of energy for Europe, particularly in Asia. Officials said those efforts would continue through this year to hit the target.

"This crisis also presents an opportunity. It's a catalyst," Biden said. "A catalyst that will drive the investments we need to double down on our clean energy goals and accelerate progress towards our net zeroes emissions future."

A focus on chemical weapons

The White House on Friday also sought to clarify another comment Biden made during Thursday's news conference -- when he said he would respond "in kind" if Russia used chemical weapons in Ukraine.

En route to Poland aboard Air Force One, US national security adviser Jake Sullivan said the US response to a potential chemical weapons attack by Russia would be done in coordination with allies. Sullivan would not say what the response would entail, but said that Russia would pay a "severe price" and emphasized that "the United States has no intention of using chemical weapons, period -- under any circumstances."

The Poland trip also comes two weeks after the US rejected Poland's proposals to facilitate the transfer its MiG-29 fighter jets to Ukraine.

The US rejected Poland's proposals over fears that the US and NATO could be perceived as taking an escalatory step, further fomenting conflict between the alliance and Russia -- which adamantly opposes Ukraine's ambitions to join the NATO alliance.

Ukrainian President Volodymyr Zelensky has repeatedly requested more aircraft for the invasion, making another appeal to NATO leaders on Thursday.

During a virtual address Thursday, Zelensky asked NATO members for "1% of all your planes," later adding, "You have thousands of fighter jets, but we have not been given one yet."

Despite Zelensky's plea, a senior US official told CNN later on Thursday that the US position on the fighter jet issue has not changed.