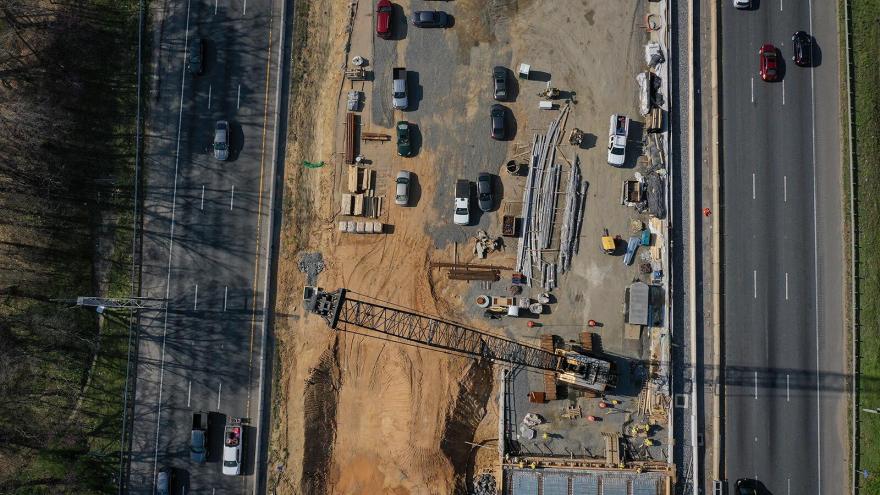 The Senate passed the temporary extension of the Highway Trust Fund, ensuring that 3,700 federal employees will not be furloughed, and pictured, an aerial view, of construction on April 6, in Fredericksburg, Virginia.

(CNN) -- President Joe Biden on Saturday signed into law the temporary extension of the Highway Trust Fund, ensuring 3,700 federal employees will not be furloughed after the House failed to pass a larger bipartisan infrastructure bill which would have addressed the funding.

The extension passed in the Senate by unanimous consent earlier Saturday and was approved by the House Friday night.

The effects of the lapse in funding were already felt Friday. Nearly 4,000 federal employees were off the job because Congress did not extend funding, a Transportation Department spokesperson told CNN earlier Friday.

This extension became law amid a larger debate among House Democrats to pass a $1 trillion, bipartisan infrastructure package as moderates and progressives continue to nail down a price tag and what's included in a broader bill to address President Joe Biden's economic agenda.

Sen. Joe Manchin made clear Thursday that $1.5 trillion was the price tag he was willing to settle on for his party's plan to expand the social safety net.

In a Dear Colleague letter released Saturday morning, Pelosi reinforced the decision by Democratic leaders this week to delay the vote for the bipartisan infrastructure bill to work on the economic bill progressives want.

"Yesterday, we extended the Thursday, September 30th legislative day to Friday, pushing to passage of the Bipartisan Infrastructure Framework and to advance Build Back Better. But more time was needed to reach our goal of passing both bills, which we will," she wrote.

Pelosi wrote in the letter, Congress needs to pass the bipartisan infrastructure bill by October 31 before the extension for funding for surface transportation runs out.

"There is an October 31st Surface Transportation Authorization deadline, after last night's passage of a critical 30-day extension. We must pass BIF well before then -- the sooner the better, to get the jobs out there," she wrote.