Biden apologizes after losing temper while addressing CNN's Kaitlan Collins: 'I shouldn't have been such a wise guy' 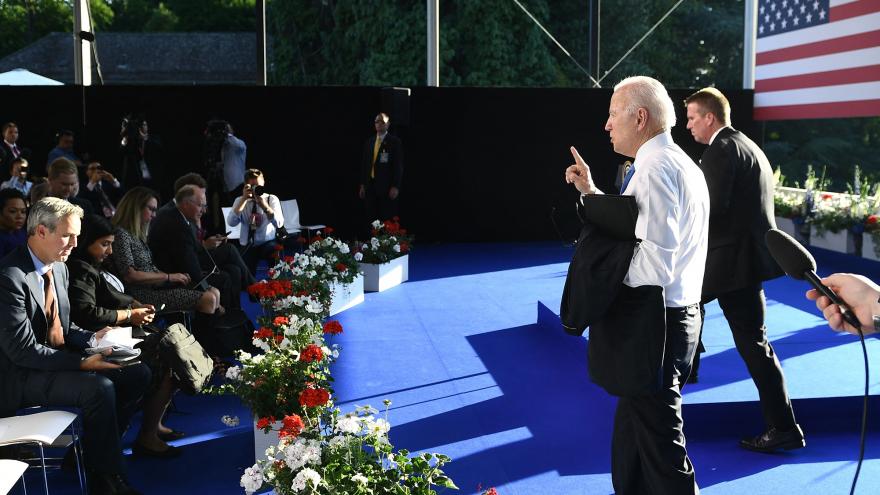 (CNN) -- President Joe Biden on Wednesday apologized to CNN's chief White House correspondent, Kaitlan Collins, after he lost his temper while speaking with her at the end of his press conference following the Geneva summit with Russian President Vladimir Putin.

Before departing Geneva on Air Force One, Biden walked over to a group of reporters assembled on the tarmac and said he owed Collins "an apology."

"I shouldn't have been such a wise guy with the last answer I gave," Biden said.

Biden, however, also complained to the group of reporters that journalists "never ask" him positive questions.

"To be a good reporter, you got to be negative, that you got to have a negative view of life, it seems to me," Biden said.

Biden grew angry at Collins earlier when she asked him why he was confident Putin would change his behavior following their meeting.

"I'm not confident he'll change his behavior," Biden quipped. "Where the hell --— what do you do all the time. When did I say I was confident?"

"What I said was — let's get it straight — I said, 'What will change their behavior is if the rest of the world reacts to them and it diminishes their standing in the world,'" Biden added. "I'm not confident of anything. I'm just stating a fact."

Collins then asked how Biden could be sure that anything would change with the Russian leader.

Biden responded, "If you don't understand that, you're in the wrong business." He then left the stage without addressing the substance of her question.

After Biden apologized, Collins said on-air that it was "completely unnecessary" as she was just doing her job.

"He did not have to apologize, though I appreciate he did," Collins said.

Collins added that "asking the president a question does not mean it has a negative slant or a positive slant."

"It is simply a way to get into the president's mindset of how he as viewing something," she said.