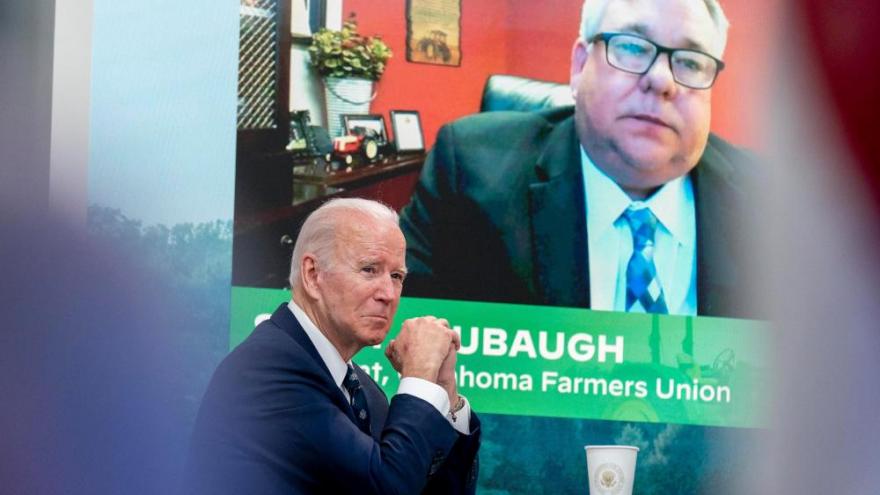 (CNN) -- President Joe Biden on Tuesday announced that the federal government is doubling the US' order for Pfizer's Covid-19 antiviral pill, Paxlovid, which has been shown to reduce hospitalizations and severe illness significantly.

"Production is in full swing. The United States has more pills than any other country in the world and our supply is going to ramp up over the coming months, as more of these pills are manufactured," Biden said during remarks at the White House. "Today I'm directing my team to work with Pfizer to double our order from 10 million to 20 million treatment courses to be delivered in the months ahead."

The President also cautioned during his remarks that "we may need even more. That's the estimate we need right now."

The first batch of the pills, he said, were shipped out on Christmas Eve "and more will be shipped this week."

But despite the additional purchase, it will take months to ramp up supply of Pfizer's antiviral treatment. And with forecasts indicating that the Omicron surge could peak this month, this could mean the vast majority of courses arrive at a time when the variant is on the decline.

Albert Bourla, the chairman and CEO of Pfizer, tweeted Tuesday afternoon that "by the end of September, 20M (Paxlovid) treatment courses will be delivered, with approximately 10M accelerated for delivery by the end of June."

The announcement comes as the US reached more than 100,000 hospitalizations due to to the illness for the first time in four months.

The Omicron variant caused 95.4% of new Covid-19 cases in the US last week -- significantly higher than the previous week, according to estimates posted Tuesday by the US Centers for Disease Control and Prevention.

Biden and his team have yet to disclose comprehensive details about a critical portion of a plan announced last month to tackle Covid-19 this winter -- an initiative to distribute half a billion tests for free using a website.

On Tuesday, the President acknowledged that the continued shortage of Covid-19 testing "remains frustrating."

"Believe me. It's frustrating to me. But we're making improvements. In the last two weeks, we've stood up federal testing sites all over the country. We're adding more each and every day," Biden said. "With more capacity for in-person tests, we should see waiting lines shorten and more appointments freed up."

Additional details are coming "soon" on a plan to allow Americans to request free test kits online from the federal government, the White House said Tuesday.

"The Department of Defense and HHS are already executing on an accelerating accelerated contracting timeline," press secretary Jen Psaki told reporters in an afternoon press briefing.

She said the request for proposal, or RFP, which "allows us to best understand logistics timing and manufacturing considerations," was closed as of Tuesday.

"We are currently evaluating the responses to it, which means we are finalizing the contracts," Psaki said.

"We're on track to start seeing movement on some of the awards through the RFP this week. So the first deliver delivery for manufacturers will start later this month. That's our expectation," she continued. Once the tests are in hand, she said, the website will come online.

During his speech at the White House, Biden emphasized that the country has "the tools to protect people from severe illness due to Omicron if people choose to use the tools" and pleaded for Americans to "please take advantage of what we already have." He also acknowledged that the "coming weeks are going to be challenging" as cases and hospitalizations continue to rise.

"We're going to see, as you all have been hearing, continued rise in cases. Omicron is very transmissible ... but much different than anything we've seen before. But you can protect yourself and you should protect yourself, quite frankly," the President said, urging Americans to get vaccinated and boosted against Covid-19 and to wear a mask.

"Be concerned about Omicron, but don't be alarmed," he continued. "And if you're unvaccinated, you have some reason as to be alarmed. Many of you will experience severe illness if you get Covid-19 if you're not vaccinated. Some will die -- needlessly die."

The CDC, meanwhile, is expected to update its guidance on the recommended isolation period, according to a source familiar with the plan, after the agency faced pressure to include a testing component in its new shortened isolation period.

The CDC announced its support of the FDA's recommendation to shorten the time needed between completing an initial series of the Pfizer/BioNTech Covid-19 and a booster shot from six months to five months, as well as its call to authorize a third dose of the primary vaccine series for some immunocompromised children ages 5 to 11.

In the same announcement Monday, the FDA also authorized expanding booster eligibility to adolescents ages 12 to 15.