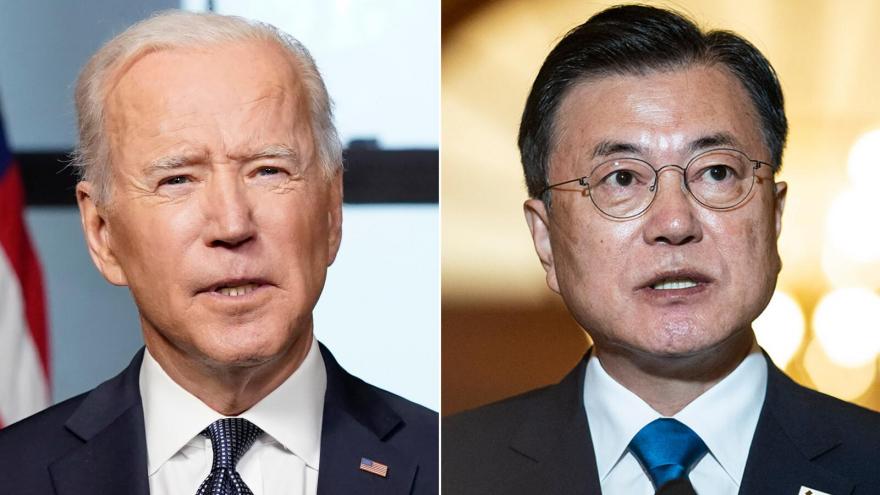 South Korean President Moon Jae-in thanked Biden at a joint news conference on Friday at the White House and said the move extended the two countries' alliance "to the field of health in a meaningful measure."

"We believe that between the second half of 2021 and going in through 2022 we could produce as many as another billion doses of vaccine," Biden said.

The President continued: "We, with advanced capabilities, have an obligation to do everything we can to provide for protection of the entire world."

Biden hosted the South Korean President at the White House on Friday for bilateral talks, and it was the second in-person meeting with a world leader of his presidency as he seeks to turn his foreign policy focus back to East Asia.

The two leaders spoke about their shared approach to North Korea and the hermit kingdom's nuclear missile program, Biden said.

"We both are deeply concerned about the situation," Biden said. "Our two nations also share a willingness to engage diplomatically with the (Democratic People's Republic of Korea) to take pragmatic steps that will reduce tensions as we move toward our ultimate goal of the denuclearization of the Korean Peninsula."

Biden announced Sung Kim, the acting assistant secretary of the Bureau of East Asian and Pacific Affairs, would serve as the US special envoy to the DPRK, the US government's official name for North Korea.

The meetings come after the Biden administration completed its months-long North Korea policy review. Biden said Friday his team consulted closely with Moon's team throughout the process of the review.

"Today has not only been affirmation of our shared history of sacrifice that binds the Republic of Korea and ... the United States together, it's a commitment to expanding cooperation and shaping our shared future in accordance with our democratic values that have made our nation strong and agile and highly competitive in the 21st century's economies," Biden said.

The meetings come as the Biden administration faces a foreign policy test amid an 11-day conflict between Israel and Hamas ending with a ceasefire Thursday. Biden has sought to deprioritize the Middle East in his overall foreign policy, viewing strategic competition with China as paramount to his administration's goals. On Friday, he returned his attention to East Asia.

Biden welcomed Moon to the White House Friday afternoon for bilateral talks that were expected to center on North Korea and other areas of cooperation like trade and climate change.

"President Moon and I and our teams have had good meetings addressing our shared agenda," Biden told reporters earlier on Friday.

The President said cooperation between the two nations "is vital to maintaining peace and stability in a critical region of the world" and pointed to their "history of shared sacrifice."

"We had a private meeting in which my staff kept coming out and saying, 'You're over time, you're over time,' but I enjoyed the meeting so much it caused us to move everything back," Biden said.

He continued: "But I look forward to continuing our discussion today here, and, and growing the US-ROK relationship further as we take on new challenges, we take them on together."

Earlier in the day, the two leaders jointly awarded the Medal of Honor to an American veteran of the Korean War, Army Colonel Ralph Puckett, the first time a foreign leader has participated in such a ceremony.

"While the enduring partnership between our two nations began in war, it has flourished through peace," Biden said during the ceremony. "It's a testimony, I think, to the extraordinary strength of our alliance, and we're joined today, as I said, by President Moon, I can't tell you how happy I am he's able to be here."

Puckett, the White House said in a statement, exhibited "intrepidity above and beyond the call of duty" on November 25 and 26, 1950, "exposing himself to deadly enemy fire" during an attack, wounded but showing "extraordinary heroism and selflessness" as he commanded his troops.

The two leaders later met in the Oval Office and then participated in an expanded bilateral meeting in the State Dining Room at the White House.

Moon was expected to press Biden on the shipment of Covid-19 vaccines as the administration scales up its vaccine diplomacy efforts, announcing earlier this week that the US would be sending 80 million vaccine doses abroad and scaling up its commitment to sharing vaccines.

The heart of the talks were expected to be North Korea, which Biden acknowledged earlier this year remains his top foreign policy challenge. After three in-person meetings with former President Donald Trump, North Korea's leader Kim Jong Un made no steps toward winding down his country's nuclear program. Little diplomatic progress was made after a meeting in Hanoi fell apart, with the two sides in deep disagreement on how and when to lift sanctions.

"We understand where previous efforts in the past have had difficulties and we're determined to try and learn from those past efforts to give ourselves the best chance of diplomatic success," a senior administration official said in previewing the visit.

"Our goals remain the complete denuclearization of the Korean peninsula, with a clear understanding that the efforts of past administrations have not achieved this objective," a senior administration official said in previewing the visit.

"Our policy will not focus on achieving a grand bargain nor will it rely on strategic patience," the official went on. "Our policy calls for a calibrated, practical approach that is open to and will explore diplomacy with the DPRK to make practical progress that increases the security of the United States, our allies and our deployed forces. We have and will continue to consult closely with the ROK. Both leaders will talk about that extensively."

"We want to engage with our South Korean friends on the way forward. We're not going to lay out exactly our diplomatic strategy here and now," the official said. "We've tried to design it to be flexible and, as I've indicated, calibrated more generally. We understand where previous efforts in the past have had difficulties and we're determined to try and learn from those past efforts to give ourselves the best chance of diplomatic success."

Still, the official said the Singapore Agreement that Trump and North Korean leader Kim Jong Un signed in 2018 can still be augmented.

"We intend to build upon the Singapore agreement but also other agreements made by previous administrations," the official said. "At this juncture it's really not in our interest to preview or comment on specific issues like an end of war declaration in hopes of spurring dialogue."

The two leaders will participate in a press conference Friday evening before Moon departs. And Moon met with Vice President Kamala Harris in her ceremonial office before his meeting with Biden. Harris said they would be discussing the "strong partnership" between the two nations and the "challenges that exist on the Korean Peninsula."

"President Joe Biden and I are confident that together, we can promote a free, open, and prosperous Indo-Pacific region, a region that is unconstrained by coercion and anchored in international rules and order," Harris said.