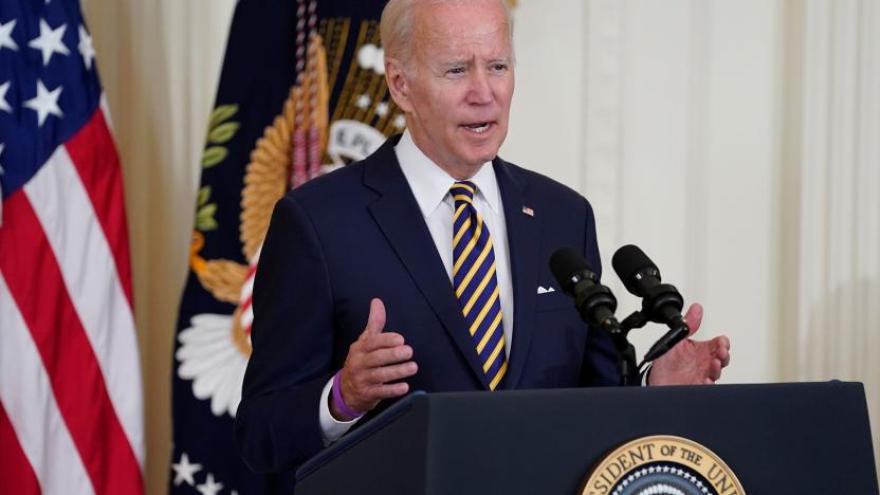 (CNN) -- President Joe Biden on Wednesday announced historic new steps to address student loan debt, which includes forgiving up to $20,000 for millions of borrowers and extending the payment freeze one final time until the end of the year.

"Education is a ticket to a better life. ... but over time that ticket has become too expensive for too many Americans," Biden said during a speech from the White House. "All this means that an entire generation is now saddled with unsustainable debt in exchange for an attempt, at least, at a college degree. The burden is so heavy that even if you graduate you may not have access to the middle-class life that the college degree once provided."

The President's sweeping plan on student loans follows extended, down-to-the-wire negotiations at the White House among stakeholders and lawmakers ahead of when payments were set to resume at the end of this month. The decision is already disappointing many, with those on the left arguing that the President should have provided even more loan forgiveness and those on the right asserting that Biden is punishing Americans who avoided going into debt. But it fulfills one of Biden's campaign promises, issuing major reforms to America's student loan system and providing relief to millions of current and future borrowers.

Borrowers who hold loans with the Department of Education and make less than $125,000 a year are eligible for up to $20,000 in student loan forgiveness if they received Pell Grants, which are given to students from low- and middle-income families. Individuals who make less than $125,000 a year but did not receive Pell Grants are eligible for $10,000 in loan forgiveness.

Biden said that the administration's "targeted actions are for families that need it the most: working and middle class people hit especially hard during the pandemic making under $125,000 a year," emphasizing that "about 90% of the eligible beneficiaries make under $75,000."

"I understand not everything I'm announcing is going to make everybody happy," Biden said. "Some think it's too much -- I find it interesting how some of my Republican friends who voted for those tax cuts think we shouldn't be helping these folks. Some think it's too little, but I believe my plan is responsible and fair. It focuses the benefit of middle-class and working families, it helps both current and future borrowers and it'll fix a badly broken system."

The Department of Education will announce details on how borrowers can claim this relief through an application in the coming weeks. Millions of borrowers will be able to receive relief automatically based on existing income data.

Additionally, the department is proposing a federal rule aimed at making the student loan system more manageable for current and future borrowers.

The proposal would also "raise the amount of income that is considered non-discretionary income and therefore protected from repayment." And it would forgive loan balances after 10 years of payments rather than 20 years under many income-driven repayment plans for borrowers with original loan balances of $12,000 or less, the department said.

Biden on Wednesday argued that "the whole economy is better off" as a result of his new plan.

"By resuming student loan payments at the same time we provide targeted relief, we're taking an economically responsible course. As a consequence, $50 billion dollars a year will start coming back into the Treasury because of the resumption of debt," he said, later adding, "There is plenty of deficit reduction to pay for the programs ... many times over."

Although student debt cancellation will deliver financial relief to millions of Americans, it would shift the cost to Uncle Sam.

A one-time cancellation of $10,000 for each borrower earning up to $125,000 a year could cost the government nearly $300 billion, according to an estimate from the Penn Wharton Budget Model. Additional forgiveness for Pell grant recipients was not included in the estimate.

Plus, loan cancellation won't address the root of the problem: college affordability. There is currently $1.6 trillion of outstanding federal student loan debt. The amount of outstanding debt would return to that level in just four years after $10,000 per borrower was canceled, according to the Committee for a Responsible Federal Budget.

White House officials on Wednesday could not provide a topline price estimate for the plan, saying too many unknowns exist to calculate how much the plan might eventually cost.

Susan Rice, the White House's domestic policy adviser, said it would depend on how many eligible borrowers sign up through the Department of Education to have their loans relieved.

Student loan cancellation also could increase inflation -- though many experts say the effect would be modest, because borrowers generally pay back their student loans over time. They wouldn't receive a lump sum of money if some of their debt is canceled. They would instead be required to pay less money each month toward their student loan payments.

"The inflationary impact its certainly positive, but I don't think it would be much. We're talking about a pretty small impact," said Kent Smetters, faculty director of the Penn Wharton Budget Model.

Larry Summers, a former Treasury Secretary who served as the director of the National Economic Council under President Barack Obama, argued ahead of the announced plan that relief would contribute to inflation.

"I hope the Administration does not contribute to inflation macro economically by offering unreasonably generous student loan relief or micro economically by encouraging college tuition increases," Summers tweeted on Tuesday, later adding, "Student loan debt relief is spending that raises demand and increases inflation. It consumes resources that could be better used helping those who did not, for whatever reason, have the chance to attend college. It will also tend to be inflationary by raising tuitions."

Jason Furman, the chairman of former President Barack Obama's Council of Economic Advisers, added, "Pouring roughly half trillion dollars of gasoline on the inflationary fire that is already burning is reckless. Doing it while going well beyond one campaign promise ($10K of student loan relief) and breaking another (all proposals paid for) is even worse."

Marc Goldwein, the senior vice president and senior policy director for the Committee for a Responsible Federal Budget -- a nonpartisan group that tracks federal spending -- argued against the plan in an interview with CNN's Poppy Harlow on "Newsroom" Tuesday morning.

He believes that canceling $10,000 of debt for each borrower will likely increase inflation, undermine the stated goal of Democrats' Inflation Reduction Act and will not significantly decrease the racial wealth gap.

"The Inflation Reduction Act saves maybe $300 billion dollars in the first 10 years. If we cancel $10,000 of debt and just extend the pause a few months, we're going to be at about that much in terms of new cost," he said. "All the deficit reduction will be wiped out. At the same time, we're probably going to do more to increase inflation from debt cancellation than any inflation reduction from the Inflation Reduction Act."

It's also not easy to target loan forgiveness to those who need it the most and exclude borrowers with higher salaries. An income threshold that cuts off borrowers who earn more than $125,000 a year could help make sure a bigger proportion of the relief goes to low-income borrowers. But some doctors and lawyers, who will eventually be making high incomes, may also reap the benefits.

It found that one-third of the canceled dollars would go to households who earn less than $50,795 a year. A little more than half of the debt relief would go to those earning between $50,795 and $141,096.

Roughly 14% of the canceled dollars would go to households earning more than $141,096 a year.

Biden has been facing political pressure from the left to broadly cancel student loan debt since taking office.

Key Democratic lawmakers, including Senate Majority Leader Chuck Schumer and Massachusetts Sen. Elizabeth Warren, had called on Biden to cancel $50,000 per borrower. The President spoke with Schumer, Warren and Democratic Sen. Raphael Warnock of Georgia on Tuesday ahead of the expected announcement.

Schumer and Warren said in a joint statement that the decision is "a giant step forward in addressing the student debt crisis."

"The positive impacts of this move will be felt by families across the country, particularly in minority communities, and is the single most effective action that the President can take on his own to help working families and the economy," they added.

Earlier this week amid reports of Biden's plan, NAACP President Derrick Johnson called the reported provisions insufficient and "not how you treat Black voters."

A senior administration official on Wednesday suggested that the relief it will help "narrow the racial wealth gap."

And Biden, in his remarks, acknowledged that the burden of student debt "is especially heavy on Black and Hispanic borrowers, who on average have less family wealth to pay for it. "

Biden has consistently pushed back on canceling that much, suggesting he would support wiping away $10,000 for borrowers below a certain income threshold. On the campaign trail, Biden called for immediately canceling a minimum of $10,000 in student debt per person as a response to the pandemic, as well as forgiving all undergraduate tuition-related federal student debt from two- and four-year public colleges and universities for those borrowers earning up to $125,000 a year. But he had also said he preferred Congress to take action rather than using executive power to do so.

Senate Minority Leader Mitch McConnell said the plan is "yet another way to make inflation even worse" and "reward far-left activists."

"President Biden's student loan socialism is a slap in the face to every family who sacrificed to save for college, every graduate who paid their debt, and every American who chose a certain career path or volunteered to serve in our Armed Forces in order to avoid taking on debt," he continued. "This policy is astonishingly unfair."

Appearing to counter his critics -- particularly Republicans who voted for the Trump tax plan -- the President said on Wednesday he would "never apologize for helping ... working Americans and the middle class -- especially not to the same folks who voted for a $2 trillion tax cut that mainly benefited the wealthiest Americans and the biggest corporations."

Biden said no one complained that the $700 billion in forgiven small business loans as a part of former President Donald Trump's Covid-19 relief would make inflation worse.

Asked if the debt cancellation was fair to those who had already paid their loans or never took them out in the first place, Biden responded: "Is it fair to the people who, in fact, do not own multi-million businesses and see these guys getting all the tax breaks?"

In the meantime, Biden has taken a more targeted approach to student debt relief. Most of his efforts have been meant to expand and streamline existing federal student loan forgiveness programs.

Biden's administration has authorized the cancellation of $32 billion so far -- more than any other administration -- largely for borrowers who were defrauded by their for-profit colleges and for permanently disabled borrowers.

He has also temporarily expanded the Public Service Loan Forgiveness program that forgives the debt of government and nonprofit workers after 10 years of payments, and made changes to the income-driven repayment plans, bringing millions of borrowers closer to forgiveness.

But the programs are complicated and don't always work the way they should. A recent Government Accountability Office report found that few people have qualified for forgiveness under an income-driven repayment plan, for example. The Department of Education had approved forgiveness for a total of 157 loans as of June 1, 2021. Meanwhile about 7,700 loans in repayment may have already been eligible for forgiveness.

On Wednesday, the Department of Education said in its statement that the administration is "proposing long-term changes" to the PSLF program.

"Specifically, the Department proposed allowing more payments to qualify for PSLF including partial, lump sum, and late payments, and allowing certain kinds of deferments and forbearances -- such as those for Peace Corps and AmeriCorps service, National Guard duty, and military service -- to count toward PSLF," the release states.

This story has been updated with additional developments on Wednesday.