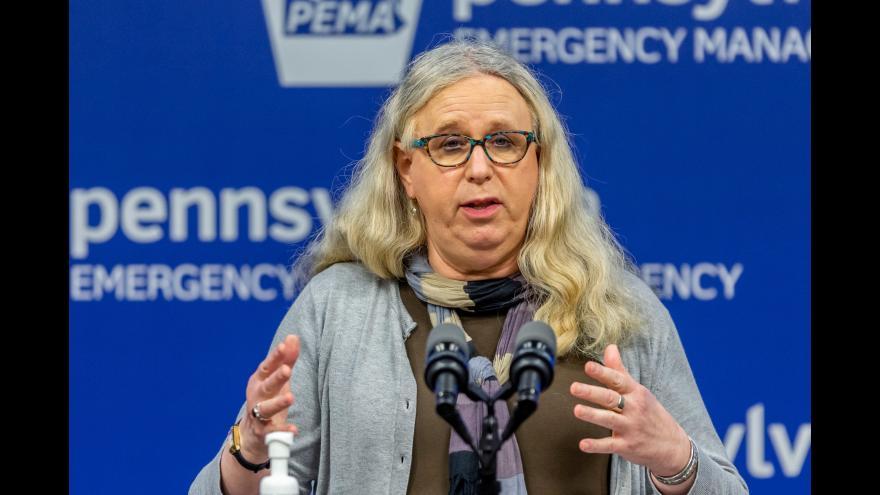 In this May 29, 2020, file photo, Pennsylvania Secretary of Health Dr. Rachel Levine meets with the media at the Pennsylvania Emergency Management Agency headquarters in Harrisburg, Pennsylvania.

(CNN) -- President-elect Joe Biden has nominated Dr. Rachel Levine to serve as assistant health secretary, and she would make history as the first out, transgender federal official to be confirmed by the United States Senate, according to a statement Tuesday.

Throughout her career, Levine has written about the opioid crisis, LGBTQ medicine, medicinal marijuana, eating disorders and adolescent medicine. She graduated from Harvard College and the Tulane University School of Medicine and completed her training in Pediatrics and Adolescent Medicine at the Mt. Sinai Medical Center in New York City.

"Dr. Rachel Levine will bring the steady leadership and essential expertise we need to get people through this pandemic -- no matter their zip code, race, religion, sexual orientation, gender identity, or disability -- and meet the public health needs of our country in this critical moment and beyond," Biden said in a statement. "She is a historic and deeply qualified choice to help lead our administration's health efforts."

Levine said in a statement later Tuesday that she is proud of the work she did to address health and LGBTQ equity issues in the state and that she is honored to have served Pennsylvanians.

"I look forward to the opportunity to continue to serve Pennsylvanians, and all Americans, as part of the Biden administration if I am fortunate enough to be confirmed to this position," she said.

Vice President-elect Kamala Harris praised Levine as "a remarkable public servant with the knowledge and experience" to help contain the coronavirus pandemic and "protect and improve the health and well-being of the American people."

In December, Biden nominated former South Bend, Indiana, Mayor Pete Buttigieg to be his transportation secretary. Buttigieg would be the first Senate-confirmed LGBTQ Cabinet secretary should his nomination make it through the chamber.

Biden's nomination of Levine was celebrated by leading LGBTQ advocacy groups on Tuesday, including the National Center for Transgender Equality, whose executive director, Mara Keisling, said Biden has "made clear that transgender people are an important part of our country."

Levine "has demonstrated her commitment to public service and is highly skilled. She has earned the chance to serve our country at the highest levels," Keisling said in a statement.

Alphonso David, the president of the Human Rights Campaign, also praised Biden's pick, writing in a tweet that Levine "has been a model for skilled and compassionate leadership during one of our nation's greatest crises."

Former Houston Mayor Annise Parker, who is president and CEO of the LGBTQ Victory Institute, also applauded Levine's nomination as "groundbreaking" in a statement Tuesday, adding it "shows the Biden administration will choose the most qualified individuals to lead our nation regardless of sexual orientation or gender identity."