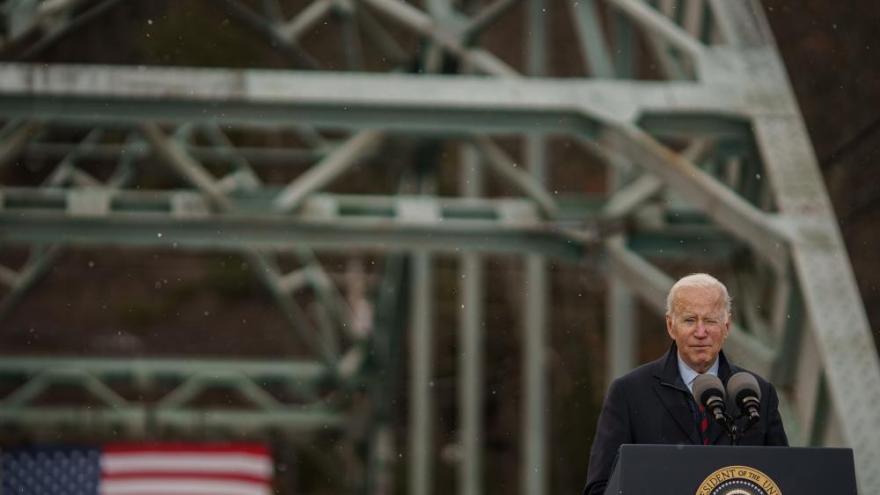 (CNN) -- President Joe Biden on Friday announced a new program to repair and replace the nation's bridges through funding from the bipartisan infrastructure law that passed Congress in November.

"My bipartisan infrastructure law includes the largest investment in our nation's bridges since the creation of the Interstate Highway System. Bridges to connect us, bridges to make America work," Biden said at the White House.

Biden said: "There's a lot of talk about disappointments and things we haven't gotten done -- we're gonna get a lot of them done, I might add -- but this is something we did get done."

The President on Friday took the opportunity to shift the focus back to one of his biggest legislative achievements since taking office after several recent setbacks to his agenda.

Nearly one year into his presidency and with the November midterm elections creeping closer, the future of the President's economic agenda is uncertain, his push for voting rights has so far not yielded any success, the Supreme Court struck down his vaccine mandates for big businesses, the pandemic is still raging and key economic indicators out this week reflect record inflation.

Biden spoke about bridges he has personally visited in New Hampshire, New Jersey and Louisiana that are in need of repairs and stressed the important role bridges play in communities. The President visited several bridges as he attempted to sell his infrastructure law, which ultimately passed Congress with support from both Republicans and Democrats, to the American people.

"People have written me about bridges they depend on," Biden said. "One man told me that the bridge he traveled on every day is a tragedy waiting to happen. One woman wrote that a bridge near the center of her town had to be closed and now drivers and tourists bypass downtown, consequently devastating local businesses."

The President said: "One person wrote to me to say 'This is your chance to show the people in my area that they matter to you.' "

"I hear you. I hear you," Biden continued. "You do matter to me, and we are going to get it done."

There are more than 43,000 bridges in poor condition across the country, according to 2021 data from the National Bridge Inventory.

The US Department of Transportation's Federal Highway Administration is launching the Bridge Formula Program, which will provide $26.5 billion to states, the District of Columbia and Puerto Rico over the next five years, as well as $825 million for tribal bridges, according to a senior administration official.

The official added that the Federal Highway Administration will distribute $5.3 billion to states, DC and Puerto Rico during the 2021 fiscal year, along with $155 million to tribes, the official added.

Experts have argued that updates and repairs of the nation's infrastructure could play an important role in moving goods and people across the country more efficiently and could help prevent a future supply chain crisis. The country's current infrastructure system received a C- score from the American Society of Civil Engineers in 2021.

"This is an investment is going to help connect entire towns and regions to new opportunities," Biden said. "With this investment we're sending a message to those communities and to the people who call them home: You matter. We're building back and building back better with you. We're making sure you're not left behind or left out."

The program is expected to improve 15,000 highway bridges, according to the official, as well as "off system" bridges that carry smaller roads and are not part of the federal highway system. Under the new program, the entire cost of repairing or rehabilitating "off system" bridges can be covered with federal funds. Funding from the program also can be used to make bridges more accessible to cyclists and pedestrians.

Biden's infrastructure implementation coordinator, Mitch Landrieu, said Friday his team was focused on allocating the large sum of money efficiently so that Americans see tangible benefits from the law.

"Since we haven't spent this kind of money on infrastructure in generations, we're also talking about how to do it with accountability," Landrieu said, speaking from the White House. "Making sure we can be good stewards of the taxpayers' dollars and deliver results on time on task and on budget."