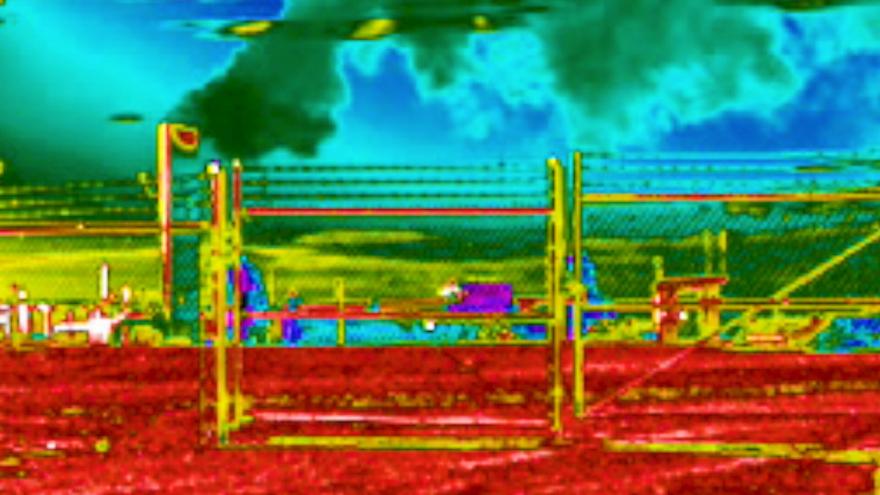 The Biden administration is proposing new rules from a number of federal agencies with the same goal, slashing planet-warming methane emissions.

(CNN) -- President Joe Biden targeted planet-warming methane emissions on Tuesday from the UN climate summit, announcing strong new US regulations from the Environmental Protection Agency and launching a Global Methane Pledge, in partnership with the European Union, that has been signed by around 100 countries.

At the center of Biden's US methane strategy is a rule from the EPA that would push oil and gas companies to more accurately detect, monitor and repair methane leaks from new and existing wells, pipelines and other equipment. The agency estimates the rule would cut 41 million tons of methane emissions from 2023 to 2035 -- more greenhouse gas than all the carbon dioxide emitted by all US passenger cars and commercial planes in 2019.

Alongside EU President Ursula von der Leyen, Biden also officially launched a Global Methane Pledge that has been months in the making.

The pledge aims slash global methane emissions by nearly 30% by the end of the decade. Since September, around 100 nations joined that pledge -- some, including Brazil and Kuwait, just a day before the pledge was officially launched. China, the world's biggest greenhouse gas emitter, has not yet joined.

"This isn't just something we have to do to protect the environment and our future," Biden said. "It's an enormous opportunity to all our nations to create jobs and make meeting climate goals a core part of our global economic recovery as well."

Von der Leyen said EU will announce its own methane regulations next month, including rules to limit venting and flaring, and track and fix leaks.

"We cannot wait for 2050, we have to cut emissions fast," von der Leyen said. "Cutting back on methane emissions is one of the most effective things we can do to reduce near-term global warming and keep 1.5 degrees Celsius. It is the lowest-hanging fruit."

Methane is a greenhouse gas around 80 times more potent than carbon dioxide in the short term, and experts have told CNN that reducing methane leaks is among the easiest ways to slow global warming. It is the main component of natural gas, which powers close to 40% of the US electricity sector. It can enter the atmosphere through leaks from oil and natural gas wells, natural gas pipelines and the processing equipment itself. Landfills and agriculture are also a source of methane emissions.

EPA Administrator Michael Regan said in a statement that the agency's new rule will "ensure robust and lasting cuts in pollution across the country."

The Biden EPA rule would go further than that of former President Barack Obama's EPA, which only covered new and recently modified equipment. It would also regulate natural gas that comes as a byproduct of oil production, which is often vented or flared, and cover leaks from compressor stations and gas-fired pneumatic controllers, all of which can be the sources of serious methane leaks.

If the rules are implemented, the agency says that would result in new routine monitoring at 300,000 well sites across the country.

"All told, the estimate is that about 75% of all methane emissions will be covered by this EPA rule," a senior administration official told reporters. "Methane is obviously a key issue for the US."

The Department of Interior and Department of Transportation's Pipeline and Hazardous Materials Safety Administration also announced a final rule to address the potent greenhouse gas. DOI's proposed rule would combat emissions from wells on public lands by discouraging venting and flaring, while PHMSA is extending federal regulations to all onshore gas gathering pipelines, requiring companies to monitor and report leaks and safety information.

The US Department of Agriculture will focus on ways to capture methane from agriculture, working with farmers to identify ways to cut methane across the food chain. Although 30% of the nation's methane emissions come from the oil and gas industry, methane from landfills and agriculture is also important to tackle, officials stressed.

The Biden administration has been looking for ways to achieve the President's goal to slash US greenhouse gas emissions by around 50% by 2030. The administration is trying to show strong executive action to compliment Biden's climate agenda in Congress, especially since some senators have not explicitly backed the economic framework that contains most of the Democrats' climate measures.

One of those measures is a fee that would be levied on oil and gas companies that emit methane above a certain threshold, along with $775 million in grants and incentives to help companies stay below the threshold.

"The fee and the rules should be complementary tools," the Environmental Defense Fund's Jon Goldstein told CNN. "The rules are critical because if designed correctly they ensure across the board, comprehensive reductions. The fee has the ability to augment the regulations by leading to faster and potentially additional reductions."

The administration is putting an emphasis on slashing methane emissions both at home and abroad, in hopes it will help limit global warming to 1.5 degrees Celsius, which scientists say the world should stay below to avoid the worst impacts of climate change.

Environmental groups also say capping leaks is good for oil and gas producers' bottom lines, since so much potential product is escaping into the atmosphere.

"At the end of the day, what's leaking is a product that can be sold," said Julie McNamara, climate and energy deputy policy director at the Union of Concerned Scientists.