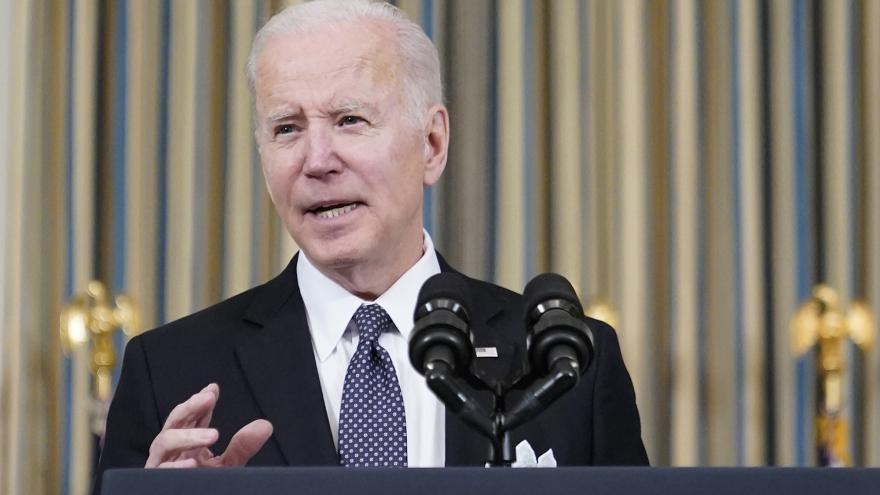 (CNN) -- President Joe Biden is announcing an unprecedented release of oil from US reserves and taking steps to punish oil companies for not increasing production from unused leases on federal land, the White House says.

The steps are an attempt to reduce gas prices while also putting an onus on oil companies to increase supply. The dramatic step confronts what has become a looming political problem months ahead of the midterm elections.

"After consultation with allies and partners, the President will announce the largest release of oil reserves in history, putting one million additional barrels on the market per day on average -- every day -- for the next six months," the White House said. "The scale of this release is unprecedented: The world has never had a release of oil reserves at this 1 million per day rate for this length of time. This record release will provide a historic amount of supply to serve as bridge until the end of the year when domestic production ramps up."

The release would amount to 180 million barrels of oil.

Biden earlier in the month announced a coordinated release of oil from the reserves in conjunction with other nations. He also released around 60 million barrels in November, which he said at the time was the largest release from the reserve in US history.

Neither move had a significant effect on gas prices, which have continued to rise as global limits on Russian energy exports have caused prices to spike.

The United States consumes around 20 million barrels of oil per day, with global consumption hovering around 100 million barrels. Biden's planned releases would put more oil on the global market, potentially bringing down costs.

The President is also calling on Congress to "make companies pay fees on wells from their leases that they haven't used in years and on acres of public lands that they are hoarding without producing." For months, the Biden administration has publicly pushed back on the idea that regulations are holding oil producers back from more domestic production, pointing to millions of acres worth of land with approved permits for oil and gas production.

"Companies that are producing from their leased acres and existing wells will not face higher fees," a fact sheet released by the White House reads, "but companies that continue to sit on non-producing acres will have to choose whether to start producing or pay a fee for each idled well and unused acre."

Biden also will issue a directive to invoke the Defense Production Act to spur domestic production of critical minerals needed to manufacture batteries for electric vehicles and long-term energy storage.

The move from the White House adds critical minerals such as lithium, nickel, graphite, cobalt and manganese to the list of items covered by the 1950 Defense Production Act, a Korean War-era law allowing the President to use emergency authority to make large orders of a certain type of product or expand productive capacity and supply. It will allow the administration to support the production and processing of these critical minerals needed for a clean energy transition.

The Department of Defense will implement this authority, according to the White House, and will do so in consultation with tribal communities and using strong environmental, labor, and community standards.

Tapping the reserve -- the stockpile of 600 million barrels of crude oil stored in underground salt caverns in Louisiana and Texas -- generally has only a limited effect on gas prices because of how much oil can be released at a time, but would act as a political sign that Biden is continuing to confront the problem.

Following Russia's invasion of Ukraine, the US price of regular gasoline spiked, hitting a record high of $4.33 a gallon earlier in March.

Yet the current cost increases began months ago, as demand for oil increased while the coronavirus pandemic waned. The White House has voiced frustration that oil companies have not returned their production to levels from before the pandemic, focusing instead on paying dividends for investors.

There has been an internal debate among administration officials at how harshly to go after oil and gas companies for not ramping up production. Biden has chided them in previous remarks, but some officials believe a full-throated campaign against the firms could backfire.

Russia's invasion of Ukraine has provided Biden another foil. In remarks earlier this month, Biden sought to put the onus for the rising prices on the Russian President: "Make no mistake: The current spike in gas prices is largely the fault of Vladimir Putin." He has repeated the phrase "Putin's price hike" since then.

Governors across the US have been attempting to curb gas prices at the state level.

Last week, California Democratic Gov. Gavin Newsom rolled out a $9 billion proposal to hand out $400 debit cards to drivers in the state to help soften the impact of the highest gas prices in the country. In Georgia, Republican Gov. Brian Kemp -- who is facing one of the toughest reelection races in the country -- signed a bill that will give $250 to $500 tax refunds to Georgians -- a move several of his rivals blasted as election-year politicking.

And as Democratic Gov. Janet Mills faces a competitive reelection campaign in Maine, she has proposed some of the most generous relief to qualified taxpayers in her state -- in the form of $850 checks -- to cushion the blow of inflation and gas prices.

This story has been updated with background information.