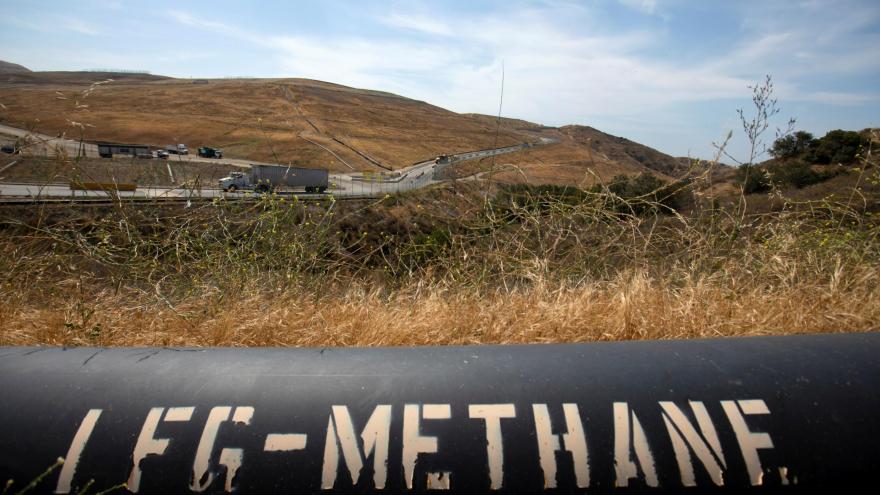 (CNN) -- President Joe Biden announced the United States and European Union have launched a global pledge to reduce emissions of methane -- a potent greenhouse gas -- by nearly 30% by the end of the decade.

Biden made the announcement Friday morning during the Major Economies Forum, a virtual, closed-door meeting with other world leaders on climate, ahead of a pivotal UN climate conference in Glasgow in November. The meeting is meant to raise climate ambition ahead of the Glasgow summit, a senior administration official recently told reporters.

"This will not only rapidly reduce the rate of global warming, but it will also produce a very valuable side benefit like improving public health and agricultural output," Biden said. "We're mobilizing support to help developing countries that join and pledge to do something significant."

Speaking on Friday, Biden called on world leaders to "bring to Glasgow our highest possible ambitions," citing the US's own goals aimed at curbing carbon emissions and his sweeping domestic economic agenda.

Biden described the August report from the UN Intergovernmental Panel on Climate Change as a "code red for humanity," reiterating his belief that the world is at an "inflection point" for climate action, something, he said, that "presents real, incredible economic opportunities."

Biden was joined by representatives from a portion of the MEF countries, including British Prime Minister Boris Johnson, South Korean President Moon Jae-in, Mexican President Andres Manuel Lopez Obrador, and European Union Commission President Ursula von der Leyen. Not all of the member countries were represented at the virtual event.

UN Secretary-General Antonio Guterres addressed the leaders at the meeting and told them they must step up their efforts to reduce fossil-fuel emissions.

"The world is on a catastrophic pathway to 2.7 degrees of heating," Guterres said. Scientists have said global temperatures should remain below 1.5 degrees above pre-industrial levels to stave off the worse consequences of the climate crisis.

Guterres also noted that the UN climate conference in November, during which world leaders will meet to discuss emissions targets, has a "high risk of failure."

"It is clear that everyone must assume their responsibilities," Guterres said.

With Earth rapidly warming, scientists say methane emissions need to be reduced fast. Charles Koven, a lead author of the UN climate change report published in August, told CNN this is due to methane's incredible warming power. Even though carbon dioxide stays in the atmosphere longer, methane is a much more potent greenhouse gas, trapping 25 times as much heat.

Major countries have recently seized on reducing methane as a fast way to cut down fossil-fuel emissions. The US and the EU began working on this global pledge within the last year, said Drew Shindell, a professor of earth science at Duke University. Shindell is a methane expert and lead a May paper showing that cutting methane emissions would help slow global warming, and have public health benefits.

"I've been in touch with both the US government and European Unions commission since the methane assessment came out, and even before the first drafts came to governments for review, they got very excited about methane," Shindell told CNN.

The US and EU finalized their pledge about a month ago, Shindell said, and are now trying to get other countries to commit to it.

Scientists say reducing methane emissions is the quickest way to slow global warming. For instance, if the world stopped emitting carbon dioxide tomorrow, Koven said, global temperatures wouldn't begin to cool for many years because of how long the gas stays in the atmosphere. Methane has a more potent warming effect, but it doesn't stay in the atmosphere as long as carbon dioxide.

"Rapidly reducing methane emissions may be the single most effective strategy to keep the 1.5-degree limit in reach, in terms of near-term actions one can take," a senior Biden administration official told CNN recently, adding methane currently accounts for about half a degree of warming.

"When you think about it going down 30% in a decade when it's been going up, that's a huge reversal, it's a U-turn," Shindell said. "If they pull this off, this could be huge."

Methane is the main component of natural gas, which powers close to 40% of the US electricity sector. It can enter the atmosphere through leaks from oil and natural gas wells, natural gas pipelines and the processing equipment itself.

"We've already taken big steps domestically to tackle these emissions and create good paying jobs, introduced by plugging leaks and capping abandoned wells and gas wells," Biden said Friday. "We believe the collective goal is both ambitious but realistic, and we urge you to join us in announcing this pledge at COP 26."

According to data from the US Energy Information Administration, the US has thousands of active wells for natural gas, millions of abandoned oil and gas wells, about two million miles of natural gas pipelines, and several refineries that process the gas.

One in three Americans lives in a county with oil and gas operations, posing climate and public health risks, according to a report by the Environmental Defense Fund.

Biden's Environmental Protection Agency is expected to release new methane regulations later this year, and Democrats in Congress are attempting to pass a new methane fee as part of their $3.5 trillion budget bill.