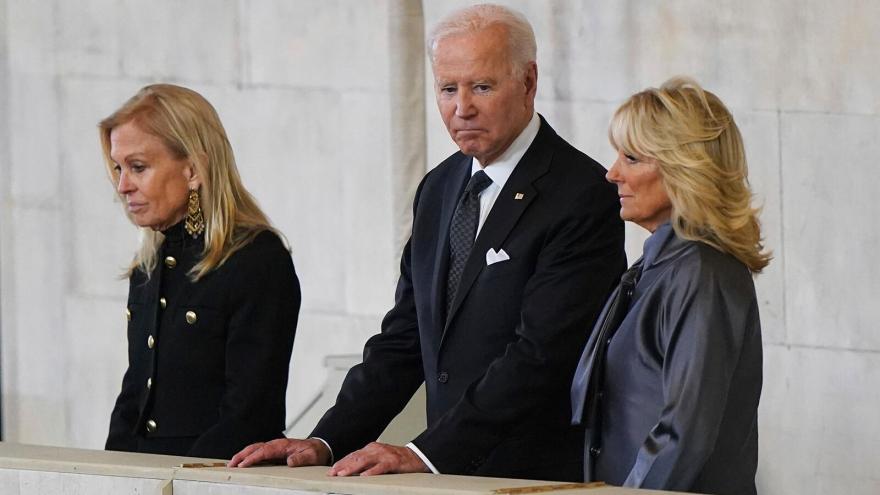 The Queen was consulted on the Order of Service for her funeral over many years, according to Buckingham Palace.

(CNN) -- US President Joe Biden on Monday joined a long slate of world leaders for Queen Elizabeth II's state funeral inside London's Westminster Abbey, where royal pageantry was on full display to pay tribute to a monarch whose rule spanned seven decades.

World leaders, dignitaries, politicians, public figures and European royals were among the 2,000 attendees.

The service was conducted by the Rev. David Hoyle, the Dean of Westminster, at Westminster Abbey. UK Prime Minister Liz Truss and Patricia Scotland, the Commonwealth Secretary General, read lessons. Archbishop of Canterbury Justin Welby delivered a sermon. Toward the end of the service, the Last Post sounded before a two-minute silence was observed. The state funeral was brought to a conclusion by the Queen's Piper, who played a Reveille, the National Anthem and a Lament.

Invitations were sent over the weekend to the heads of state of countries with whom the United Kingdom has diplomatic relations. The list of leaders who attended the state funeral was long, and included leadership across the Commonwealth and around the world. Representatives of Syria, Russia, Belarus, Myanmar, Afghanistan and Venezuela were absent. For most nations with an invitation, attendance extended to the head of state plus a guest.

Following Monday's state funeral, the coffin will be conveyed from the hall to Wellington Arch before making its final journey out of London to Windsor. The Queen's journey will end at St. George's Chapel, within the grounds of Windsor Castle, where her coffin will be lowered into the Royal Vault below the chapel.

Biden was one of the few world leaders to arrive in his own motorcade at the Queen's funeral, but for the last 10 days, his aides have worked behind the scenes to ensure he had as small of a footprint as possible while she was laid to rest.

A person familiar with the planning said the White House was very conscious about not making the trip about Biden, reviewing protocol closely in recent days as to avoid any missteps that could potentially distract from the funeral itself. Biden traveled with a smaller staff than is typical for an overseas visit, and his aides decided against scheduling even an informal meeting with Truss while in London.

Instead, the only events on Biden's schedule were those planned in coordination with the palace, the person said.

Plans for the Queen's funeral have been in place for years, allowing American advisers greater insight into precisely what will happen over the coming days as they make security arrangements. The White House said it received an invitation only for the President and first lady, making for a slimmed-down American footprint.

Security in the British capital is at its highest level in memory as dozens of world leaders have convened over the weekend and into Monday to remember the late Queen, who met 13 sitting US presidents during her reign.

In an interview with Sky News last week, London Mayor Sadiq Khan said of the scale: "If you think about the London Marathon, the carnival, previous royal weddings, the Olympics -- it's all that in one."

Biden is scheduled to fly back to Washington on Monday afternoon after the funeral. During their brief visit to London, the President and first lady Jill Biden paid their respects to the Queen as she was lying in state, signed condolence books and attended a reception with other leaders and King Charles III.

The funeral takes place the same week world leaders are slated to convene for the United Nations General Assembly in New York, where Biden will hold his first bilateral meeting with Truss on Wednesday.

This story has been updated with additional developments and reporting.