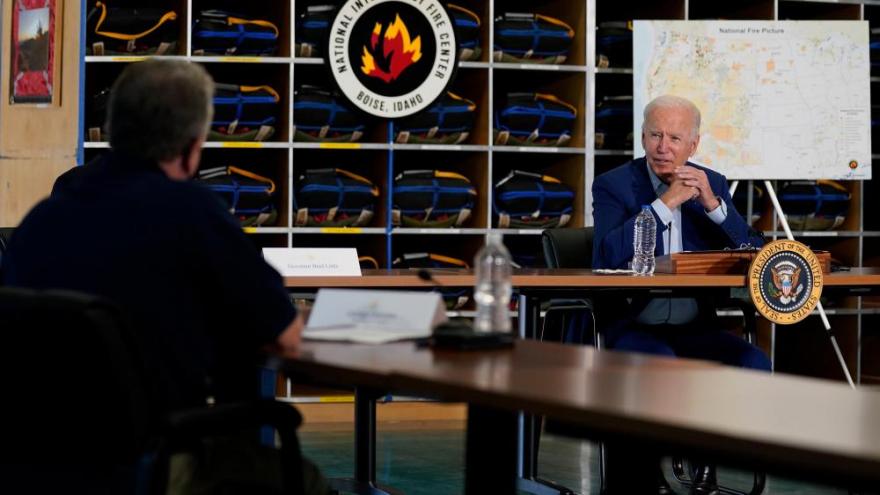 President Joe Biden, plans to unveil a new effort to help Australia acquire nuclear-powered submarines, a major step toward countering China as part of a new trilateral partnership between the United States, Australia and the United Kingdom.

(CNN) -- President Joe Biden on Wednesday unveiled a new effort to help Australia acquire nuclear-powered submarines, a major step toward countering China as he works to build international backing for his approach to Beijing.

The announcement came as part of a new trilateral partnership among the United States, Australia and the United Kingdom that the three countries' leaders jointly revealed Wednesday afternoon.

"The United States, Australia and the United Kingdom have long been faithful and capable partners and we're even closer today," the President said. "Today, we're taking another historic step to deepen and formalize cooperation among all three of our nations, because we all recognize the imperative of ensuring peace and stability in the Indo-Pacific over the long term."

The partnership kicks off what is expected to be a flurry of diplomatic engagements for Biden this autumn, from next week's United Nations meetings to a White House summit of Asian leaders to October's Group of 20 talks in Italy.

Underpinning his efforts is a desire to rally the West and US partners in Asia in the battle between "autocracy versus democracy," one of the defining objectives of his presidency. Biden has made countering China a central aspect of his foreign policy as tensions grow over the South China Sea and Taiwan, and has said he wants American allies on board.

The new partnership between the US, UK and Australia -- three English-speaking maritime democracies -- is not specifically about China, officials insisted ahead of the announcement. Instead, they said the three countries would hold a schedule of meetings over the coming months to coordinate on cyber issues, advanced technologies and defense in a bid to better meet modern-day security challenges. The new partnership is called AUKUS, pronounced "aw-kiss."

Yet it is the move toward establishing nuclear submarine capability in Australia, which officials said will allow the country to operate at a vastly higher level militarily, that will amount to the center of the announcement. Nuclear submarines are able to maneuver at greater speeds and endurance, and more stealthily, than conventional ones, which must surface more often.

"This allows Australia to play at a much higher level and to augment American capabilities," a senior administration official said ahead of the announcement. "This is about maintaining peace and stability in the Indo-Pacific."

Biden, during Wednesday's announcement, also maintained that the establishment of AUKUS is necessary because "we need to be able to address both the current strategic environment in the region and how it may evolve."

"Because the future of each of our nations and indeed the world depends on a free and open Indo-Pacific, enduring and flourishing in the decades ahead. This is about investing in our greatest strength, our alliances, and updating them to better meet the threats of today and tomorrow," the President added.

On Thursday, China's US embassy spokesman Liu Pengyu said countries should "shake off their Cold War mentality and ideological prejudice," according to Reuters, following the announcement of the AUKUS deal.

Liu added that nations "should not build exclusionary blocs targeting or harming the interests of third parties."

'This technology is extremely sensitive'

Top officials from Australia were in Washington on Wednesday meeting with their counterparts, including Secretary of State Antony Blinken and Defense Secretary Lloyd Austin, ahead of the formal announcement. During remarks Wednesday evening, Biden announced that Austin would lead efforts for the US government in close collaboration with the State Department and Department of Energy.

American officials said the details of the new partnership had been closely held as they were developed over the past weeks and months, but that other allies and government stakeholders would be briefed on the specifics in the coming days.

British Prime Minister Boris Johnson defended the new trilateral partnership as not "adversarial towards any other power." Addressing the UK parliament on Thursday, Johnson said the deal "merely reflects the close relationship that we have with the United States and with Australia."

"Obviously, we also have a shared interest in promoting democracy, human rights, freedom of navigation and freedom of trade around the world."

The US and UK plan to dispatch technical and strategic teams to identify the best pathway for Australia to acquire nuclear submarines over the next 18 months. The new plan will mean the cancellation of a $90 billion deal Australia had already made with France for conventional submarines.

French Foreign Minister Jean-Yves Le Drian described the Australian government's decision to renege on the contract for diesel-powered subs with French manufacturer Naval Group as a betrayal of trust.

"Speaking politely, it's a real stab in the back," Le Drian said on radio station France Info Thursday. A veteran diplomat, Le Drian is rarely heard speaking so frankly, no doubt a sign of the upset that this move has caused.

"We had established with Australia a relation of trust ... that trust has been betrayed. And today I am angry, with much bitterness at this break," Le Drian said.

"This is not done between allies," he said, flagging the two years of negotiations that had preceded the deal. Le Drian had played a leading role in these talks, which began in 2014, he said. Australia had wanted "a form of strategic autonomy" through the deal, which had included considerable transfer of technology, Le Drian added. The deal was due to last 50 years.

As recently as a few days ago, Le Drian and the French minister of armed forces, Florence Parly, held a video conference with their Australian counterparts about the deal, Le Drian said. He said that apart from "some small adjustment problems," there was no sense that the deal would be broken.

The decision also sparked tensions between New Zealand and Australia, with NZ Prime Minister Jacinda Ardern issuing a statement on Thursday saying Canberra's nuclear-powered submarines would be banned from her country's waters.

"New Zealand's position in relation to the prohibition of nuclear-powered vessels in our waters remains unchanged," Ardern's office said in a statement to CNN. However the statement added that New Zealand welcomed increased engagement by the UK and the US in the Asia Pacific region.

American officials described the effort to assist the country with nuclear propulsion as an exceedingly rare step between allies, undertaken only once previously, that in some ways goes against established US practice.

"This technology is extremely sensitive. This is, frankly, an exception to our policy in many respects," the official said.

It was necessary, they said, in order to send a message of reassurance to countries in Asia. It comes amid rising tensions between the US and China, who are maneuvering to limit each others' global influence.

US officials insisted the intent of the new partnership was not to challenge China specifically.

"This partnership is not aimed or about any one country, it's about advancing our strategic interests, upholding the international rules based order, and promoting peace and stability in the Indo-Pacific," the official said.

Still, the announcement is the latest step by the US to push back against China's military and technological rise. Next week, Biden will host an in-person summit of the QUAD partnership of Japan, Australia and India — another grouping viewed as a way to assert American leadership in Asia. He has also sought to engage other Asian leaders, and Vice President Kamala Harris visited Singapore and Vietnam late last month.

Last week, Biden held a 90-minute telephone call with Chinese President Xi Jinping, their first direct communication in seven months. Officials described the conversation as "familiar" and "candid," but said Biden did not directly raise the new strategic partnership with Australia and the UK.

Biden on Tuesday denied reports that Xi, in their phone call, turned down an invitation to meet in person. US officials say they still hope to set up an in-person meeting between the two leaders, but aren't sure it will occur on the sidelines of the G20 at the end of October. That is primarily because Xi has not confirmed he will physically attend the summit, which is being held in Rome. Xi has not left China in roughly 600 days, since before the start of the coronavirus pandemic.

It's possible Xi participates in the summit virtually, and US officials aren't ruling out a virtual meeting between Biden and Xi. Biden, however, has said in-person sit-downs with foreign leaders are preferable to virtual meetings or phone calls, telling aides privately he doesn't believe as much can be accomplished when meeting remotely.

After a chaotic withdrawal from Afghanistan that led to questions about Biden's willingness to remain engaged abroad, officials said the new announcement should act as proof of the President's continued willingness to stand with allies and uphold a rules-based order in Asia.

"Over the last several years there have been questions: does the United States still have the stomach, do we have the wit and wisdom, that we want to continue to play that role?" a senior administration official said.

"What President Biden is saying with this initiative is 'Count us in.' We are all in for a deeper, sustained commitment to the Indo-Pacific. And we recognize that one of our critical roles in indeed the maintenance of peace and stability there," the official went on.

Also hoping to play a larger role in Asia is the United Kingdom, which under PM Johnson has sought to pursue a "Global Britain" strategy of greater engagement abroad. That effort has been sputtering at times, particularly as Johnson works to contain the Covid-19 pandemic at home and buffer his country from the economic fallout of Brexit.

Still, American officials have received indications from their British counterparts that the UK hopes to "substantially step up its game in the Indo-Pacific," and believe the new partnership with Australia can help advance that goal.

Ahead of the announcement, Johnson undertook a major reshuffle of his cabinet ministers, including reassigning his foreign secretary. The shake-up did not appear directly related to his later announcement with Biden and Australian Prime Minister Scott Morrison.

American officials said the cooperation between the three countries was limited only to nuclear propulsion, and said Australia has no intention of pursuing nuclear weapons.

During his remarks on Wednesday, Biden emphasized that the AUKUS submarine project would be using conventionally armed submarines, not nuclear-armed ones.

"We're not talking about nuclear-armed submarines. These are conventionally armed submarines that are powered by nuclear reactors," Biden said. "This technology is proven, it's safe, and the United States and UK have been operating nuclear powered submarines for decades."