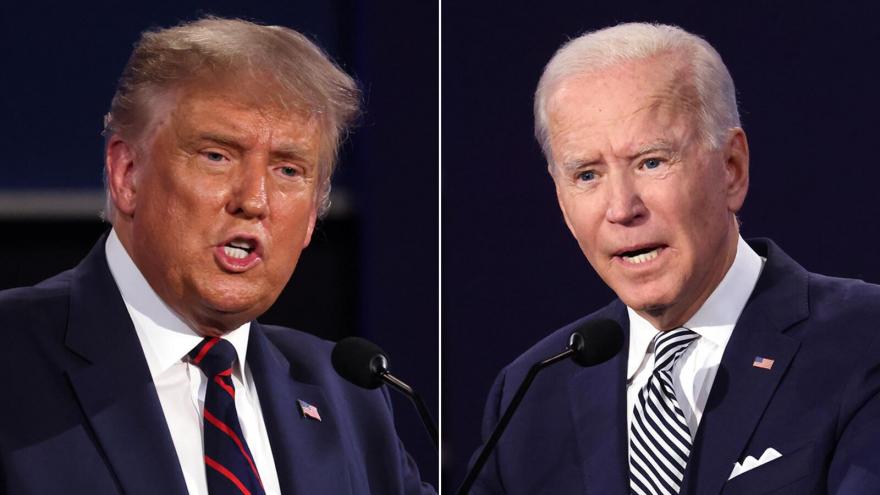 Donald Trump and Joe Biden prepare for a final showdown in the last presidential debate before the 2020 election.

Bauer interrupts and shouts down Biden, who is trying to formulate his arguments for why he should be president.

Bauer is playing the role of Donald Trump during mock debate prep -- often embodying the President as he behaved during the first debate in order to prepare Biden stay on message in the event that Trump blows through new measures put in place by the Commission on Presidential Debates to prevent interruptions.

Team Biden is worried that the plan to mute candidates during portions of the debate will not help with the distraction factor. Even if the audience at home can't hear the President's microphone if he interrupts Biden, the Democratic nominee will be standing right there and will hear him loud and clear. Paying no attention to the man next to him is a significant part of Biden's prep for going into the ring with the President one last time.

Biden and Trump are heading into their final planned showdown of the 2020 campaign, with 12 days to go until Election Day. And their respective teams are studying the first debate, which delved into chaos as Trump continually interrupted Biden. The lessons gleaned from that initial matchup are informing the recommendations being made to the candidates as they prepare to take the stage one last time.

Trump's advisers are pleading with the President to try a different tactic this time around.

Republican sources tell CNN that not only did the President's internal polling numbers drop because of his erratic performance during the first debate, his fellow Republicans down ballot, especially vulnerable Republican senators, also took a hit in their own polling because of Trump's behavior on stage with Biden.

Kellyanne Conway, who was part of the team that helped prepare the President for the first debate inside the White House map room, says she warned him not to interrupt too much.

Conway and other Trump advisers are renewing their argument to him ahead of the last debate that the more Trump let's Biden speak, the worse it is for Biden.

"Biden gets flummoxed fairly easily when he's trying to remember a contrived or practiced phrase or soundbite and let him do that. Let him have the airtime all to himself so people can really see what happens with Joe Biden when he's left just with them, the audience at home and Joe Biden's thoughts," Conway said.

Trump seems to at least be hearing that advice.

"There's a lot of people that say let him talk because he loses his train -- he loses his mind, frankly," Trump told Fox News this week.

But Biden allies push back on the notion that more Biden is dangerous for their candidate, arguing for example that during his town hall with ABC News last week, he was more cogent and clear when he was not constantly being interrupted.

"People who don't like hearing about plans and who want to see a food fight may end up being disappointed, but that's what Joe Biden wants to talk about is the specifics related to what he's going to do for people," said former Democratic Michigan Gov. Jennifer Granholm, who helped prepare Biden for debates against Sarah Palin and Elizabeth Warren and is also a CNN contributor.

One of the many reasons Trump sources told CNN they were frustrated with their candidate during the last debate was because he failed to remind voters of the promises he made four years ago that he followed through on -- from renegotiating trade deals like NAFTA, which he railed against in 2016, to moving the US embassy in Israel to Jerusalem, which many of his predecessors before him promised as candidates but never actually did when in office.

The economy is the one issue polls consistently show the President competitive with Biden in the eyes of voters. Trump allies have been pushing him for months to stop getting distracted with things that don't move voters and in many ways turn off voters, and talk more about the economy before the pandemic. Trump allies tell CNN they are pleading with him to use this final opportunity on the debate stage to talk up the things that voters could give him credit for.

Trump sources say they really hope he avoids hitting his new favorite target, Dr. Anthony Fauci, who is one of the most popular figures in America right now. One source told CNN this week that Trump was told in private conversations that hitting Fauci as he has been doing is "the dumbest thing in the history of politics."

Another recommendation for Trump: A touch of humor

One of the many reasons even Trump supporters think that he bombed in the last debate was because he was so aggressive and came off so angry. This time, advisers are encouraging him to lighten things up as he makes his points.

"Definitely more levity, even though there's gravity right now in our country," is what Conway recommends for the President.

A touch of humor certainly worked for candidates in the past, especially as they try to deflect from a weakness.

Ronald Reagan famously took concerns that he was too old for a second term head on, by saying "I will not make age an issue of this campaign. I am not going to exploit for political purposes my opponent's youth and inexperience," he said, speaking of Walter Mondale, who even broke into laughter.

Conway suggests that Trump say something to acknowledge some of his own weaknesses, while weaving in concerns about his opponent's policies.

"'You know Joe, I'll promise in my second term I'll tweet less, but you have to tax less. Are you willing to make that?'" said Conway, pretending to be the President at the debate.

Biden aides are preparing him once again for when the President brings up allegations against his son, Hunter Biden. CNN is told that the former vice president does not want to retaliate by bringing up Trump's own children and questions about their qualifications for working in the White House, for example.

Aides also are hoping that Biden replicated what they insist was an impromptu response during the first debate about his son's drug addiction, saying it was relatable and genuine.

Also, if Trump brings up Hunter Biden's business dealings in China, advisers are hoping that Biden pivots to a New York Times report this week that revealed the President has a Chinese bank account and may even pay taxes to the government there.

Former President Barack Obama previewed this line of attack against Trump at a rally in Philadelphia on Wednesday.

"We know that he continues to do business with China because he has a secret Chinese bank account. How is that possible?" asked the former president.

"Can you imagine if I had a secret bank account when I was running for re-election?" Obama asked rhetorically.

"They would have called me Beijing Barry," he added.

When Biden impulsively told the President, "shut up man" when he was trying to speak and Trump wouldn't stop interrupting, his allies say that was one thing.

But many say calling the President a clown went too far.

"I can understand it as a human being why you would want to do that, and I don't think it's a bad thing because I do think a lot of people are feeling that. But I do think that the longer you are playing on his turf or responding to him, the less time you are spending talking to people, and talking to people is what this is about," Granholm said.

Biden says he got the message, expressing regret earlier this month.

"I should have said this is a clownish undertaking instead of calling him a clown," Biden said.

In addition to avoiding bad moments, Biden sources say he is working on replicating good ones. Aides say they believe Biden's direct to camera approach worked well for him during the first debate, and are hoping he can do more of that, saying it helped him to not just tune out Trump, but more importantly to connect with voters.