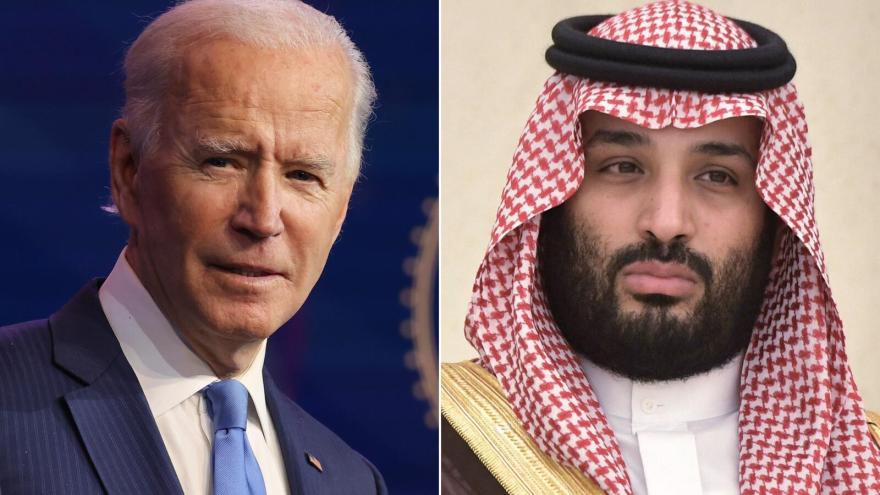 Speaking Friday, Biden confirmed a meeting with Prince Mohammed and other Arab world leaders was possible in the coming weeks, though insisted there were "no direct plans."

And he defended the prospect of meeting the crown prince, insisting it did not represent a turnabout from his onetime stance that Saudi Arabia be made a "pariah" for its human rights record.

"I have been engaged in trying to work with how we can bring more stability and peace in the Middle East and there is a possibility that I would be going to meet with both the Israelis and some Arab countries at the time -- including, I expect, would be Saudi Arabia, would be included in that if I did go," Biden said Friday near his beach house in Delaware.

A trip to Riyadh would amount to the culmination of months of work by the Biden administration officials to rebuild a relationship that had deteriorated at the start of Biden's tenure. And it would mark a distinct break from Biden's onetime desire to isolate the kingdom and its powerful crown prince, a reflection of the balance US presidents face when dealing with autocratic or even murderous regimes.

"I'm not going to change my view on human rights," Biden said, "but as President of the United States, my job is to bring peace if I can, peace if I can, and that's what I'm going to try to do."

In a surprise announcement on Thursday, OPEC and allied oil-producing nations revealed that they plan to increase oil production by 200,000 barrels per day in July and August, leading to praise from the White House for Saudi Arabia's role in "achieving consensus" and facilitating the boost.

While a small amount in the grand scheme of things, the move is being viewed by Biden administration officials as a significant breakthrough in the diplomatic relationship. One official described it as a "huge shift" after nearly a year of the Saudis flatly refusing US requests to increase production, even when oil prices were at record highs last year.

Biden separately announced on Thursday that a truce in Yemen had been extended, similarly heaping praise on the Saudis for demonstrating "courageous leadership by taking initiatives early on to endorse and implement terms of the UN-led truce."

The timing of the announcements is deliberate, the official said, and is laying the groundwork for a likely meeting this month between Biden and bin Salman.

As CNN has previously reported, because Saudi Arabia currently holds the presidency of the Gulf Cooperation Council, any engagement between Biden and the crown prince would likely coincide with a meeting of the council in Riyadh later this month. A separate White House official told CNN that a meeting is not yet finalized but that if the President "determines that it's in the interests of the United States to engage with a foreign leader and that such an engagement can deliver results, then he'll do so."

A former senior intelligence official with knowledge of the planning told CNN that all sides are "still working" to finalize the meeting "but things are working out."

"But any decisions on the trip will be determined in part with the security and logistics requirement that go with a presidential trip," the former official added.

A meeting between American and Saudi leaders would have once been considered routine but now marks a significant shift due to the recent strain in the relationship. Biden has not engaged directly with bin Salman, considered the day-to-day ruler of Saudi Arabia, since taking office, opting instead to speak directly with the crown prince's father, King Salman, the ailing 86-year old monarch.

Biden has been highly critical of the Saudis' record on human rights, its war in Yemen and the role its government played in the murder of the journalist Jamal Khashoggi. Asked about Biden's comments in 2019 that Saudi Arabia should be a "pariah" on the world stage, White House press secretary Karine Jean-Pierre said earlier this week that "his words still stand."

But the National Security Council's Middle East coordinator, Brett McGurk, and the State Department's senior adviser for global energy security, Amos Hochstein, have been working for months behind the scenes to repair the relationship, as part of a growing acknowledgment in the White House that a relationship with the crown prince will be necessary as the US works to isolate Russia and find alternative sources of oil and natural gas.

Those concerns have been raised with Saudi Arabia, the official said, who added that "contacts and diplomacy" with the country have "intensified recently."

Still, a meeting will likely spark some controversy at home for the President. Even before Biden's trip is formally announced, it has drawn scrutiny from groups who accuse the Kingdom of grave human rights abuses.

In a letter to the President on Thursday, a group representing family members of those who died in the September 11, 2001, terror attacks urged Biden to raise Saudi Arabia's role in the attack should he meet with the crown prince or other leaders in Riyadh.

"It is imperative that you prioritize accountability for 9/11 in any conversations between members of your administration and Saudi officials up to and including your own with the Crown Prince or any other members of the Saudi royal family," the group wrote.

The Saudi government has denied any government involvement in the attacks. But the allegations of Saudi government complicity have long been the subject of dispute in Washington. Fifteen of the 19 al Qaeda terrorists who hijacked four US planes on September 11, 2001, were Saudi nationals.