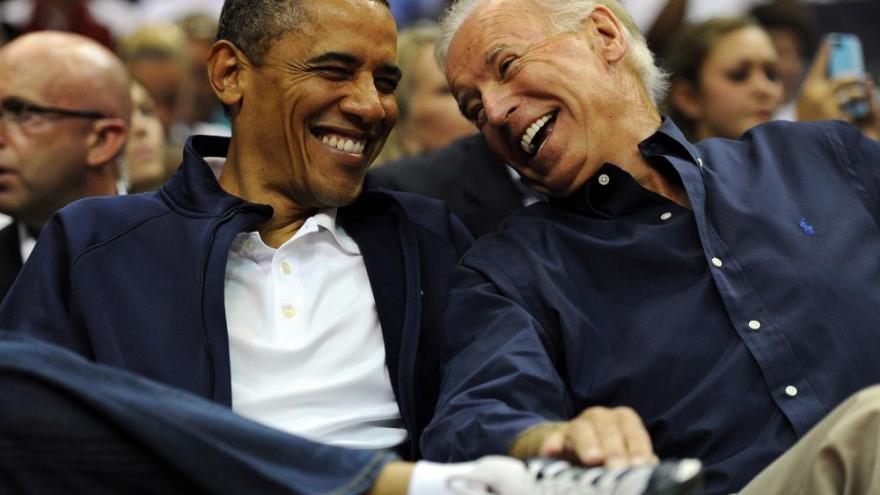 President Joe Biden and former President Barack Obama will appear in an hour-long NBC special aimed at promoting Covid-19 vaccinations as they hope to convince hesitant Americans to get shots.

(CNN) -- President Joe Biden and former President Barack Obama will appear in an hour-long NBC special on Sunday aimed at promoting Covid-19 vaccinations as they hope to convince hesitant Americans to get shots.

The special comes as the Biden administration races to get shots in arms and combat vaccine hesitancy, particularly after it was recommended that the US pause the use of Johnson & Johnson's Covid-19 vaccine over six reported US cases of a "rare and severe" type of blood clot.

The "Roll Up Your Sleeves" special will air at 7 p.m. ET on Sunday on NBC, according to a news release from the nonprofit Civic Nation. It is presented by Walgreens and was created by ATTN: in partnership with Civic Nation's Made to Save initiative, which is a national public education and grassroots organizing effort focused on equitable access to Covid-19 vaccines and building trust in the vaccines.

Biden will make remarks during the special, and Obama will appear alongside former NBA stars Charles Barkley and Shaquille O'Neal to encourage Americans to get vaccinated so they can help end the pandemic and return to their normal lives.

Biden's chief Covid-19 adviser Dr. Anthony Fauci will speak on "separating fact from fiction about the vaccines," and will be interviewed by actor Matthew McConaughey.

The husband and wife duo of NFL quarterback Russell Wilson and artist Ciara are set to host the special.

The ad campaign included a minute-long, personal video that shows the four former presidents and former first ladies receiving their vaccines, and another that featured Clinton, Bush and Obama standing together to urge Americans to step up and get vaccinated.

The Biden administration has launched TV ads to encourage vaccinations and increase public confidence in the vaccines as it ramps up distribution across the country.

The administration has announced nearly $10 billion will be allocated toward increasing vaccine access and confidence in hard-hit communities across the country, which includes $3 billion of CDC funding to support outreach efforts in the states through community-based organizations and trusted community leaders.