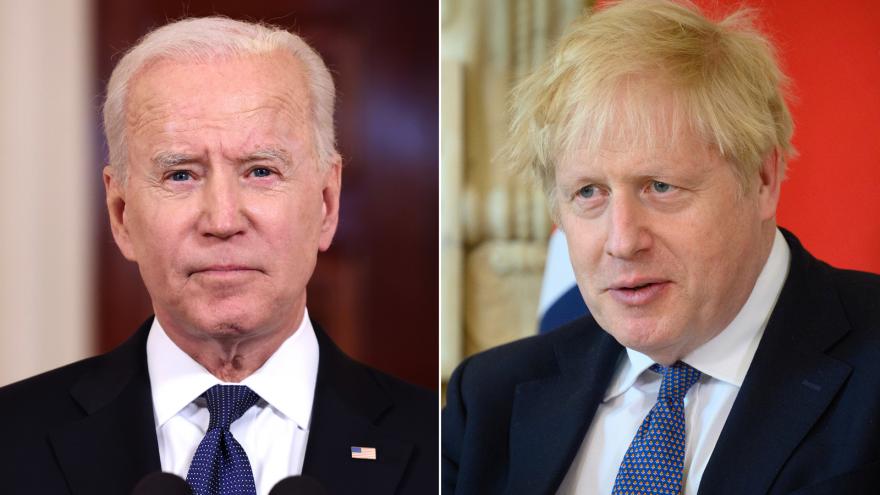 (CNN) -- President Joe Biden and UK Prime Minister Boris Johnson are expected to commit on Thursday to working to open up travel between the US and the UK and lifting restrictions that were put in place to stop the spread of Covid-19, according to a source familiar with the matter.

Biden and Johnson are expected to announce a new travel task force that will explore options and make recommendations on how to safely resume international travel. The President is set to meet with Johnson on Thursday during his first foreign trip as President ahead of the Group of Seven summit being held in southwestern England.

National security adviser Jake Sullivan said Wednesday the US has established two working groups of public health experts -- one with the United Kingdom and one with the European Union.

"The point of these working groups is to share data and set out both milestones and criteria to enable a reopening of travel between our two countries as swiftly as possible, consistent with public health guidance," Sullivan told reporters aboard Air Force One.

Biden and Johnson are also expected on Thursday to agree to a new Atlantic Charter modeled on the historic declaration made by President Franklin D. Roosevelt and Prime Minister Winston Churchill in 1941 that set out American and British goals for the world after the end of World War II, according to Sullivan.

"There will be a refresher of the Atlantic Charter, which is now 80 years old, so there will be an updated statement of principles between the US and UK as free societies and free peoples speaking out about what we believe in the 21st century," Sullivan told reporters.

The charter will outline priorities, values and challenges that include defending democracy, reaffirming the importance of collective security, building a more fair and sustainable global trading system, combating cyberattacks, addressing the climate crisis, protecting biodiversity and bringing an end to the coronavirus pandemic, according to the source.

Biden and Johnson are also expected to agree to pursue a landmark bilateral technology agreement that will be signed next year, according to the source. The agreement will focus on reducing barriers British tech firms face when trying to work with US counterparts.

Personal dynamics between the leaders of the United States and Britain have often played a key role in the "special relationship" between the two trans-Atlantic powers. Roosevelt and Churchill were famously close, as were Prime Minister Tony Blair and US President Bill Clinton, and then, to the surprise of many, Blair and US President George W. Bush during the Iraq War.

Johnson was a favorite of US President Donald Trump, who praised him for his support for Brexit, Britain's withdrawal from the European Union. During the 2020 campaign, Biden referred to Johnson as a "physical and emotional clone" of Trump.

Biden still holds deep reservations about Britain's exit from the European Union -- a move Johnson championed and has advocated for as prime minister. Biden is expected to press Johnson on the issue during their talks, and specifically on how it might affect the Good Friday Agreement in Northern Ireland.

But the leaders, hoping to reenergize relations, are promising to emphasize their common ground on issues such as climate change and Covid-19 vaccinations rather than their differences. Their meeting before the G7 begins is a signal of the importance both sides place on the relationship, according to officials.

Johnson, as host of the summit, has laid out goals on vaccinating the world by 2022. He will also host a major climate summit later this year that Biden has placed enormous importance on in his bid to reduce global carbon emissions.

The two men worked together earlier this year when Biden hosted his own climate summit, which was meant to act as a precursor of sorts to Johnson's event, set for the fall in Scotland.

The new Atlantic Charter is expected to be an important symbolic reaffirmation of the value both nations place on close ties.

The original document was issued on August 14, 1941, and was considered one of the first key steps toward establishing the United Nations in 1945. The charter set out a vision for the postwar world and its major points included a nation's right to choose its own government, that the US and Britain wouldn't seek territorial gains from war, the easing of trade restrictions and a plea for postwar disarmament.

The announcement will come as the President seeks to renew the US' commitment to its allies and partners abroad and underscore his own commitment to working with other countries to solve global problems. The President arrives in the United Kingdom on Wednesday, and will also travel to Belgium and Switzerland for meetings with other world leaders, including a highly anticipated summit with Russian President Vladimir Putin.

Following the summit, the President and first lady Jill Biden will meet with Britain's Queen Elizabeth II at Windsor Castle on Sunday. The meeting with Biden would make him the 13th American president with whom the Queen, who is 95 years old, has met.

The President will then travel to Brussels to participate in the NATO summit on Monday, where he is expected to affirm the US' commitment to NATO, trans-Atlantic security and collective defense.

Biden will then travel to Geneva, Switzerland, to meet with Putin on June 16. Biden plans to underscore the US' support for Ukraine's sovereignty and to raise Belarus, among other issues, White House press secretary Jen Psaki has said.