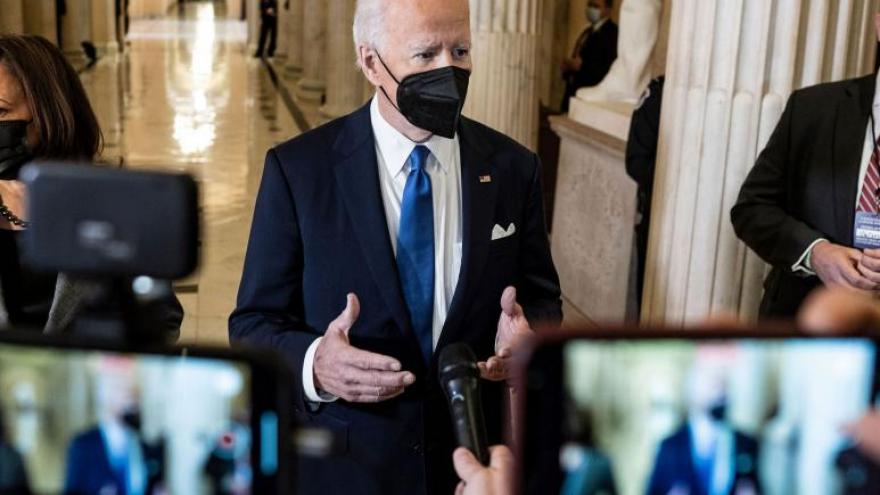 President Joe Biden and Vice President Kamala Harris will meet with Senate Judiciary Committee Chair Dick Durbin and the committee's top Republican, Sen. Chuck Grassley, at the White House on Tuesday to discuss the upcoming vacancy on the Supreme Court, the White House says. President Biden is shown here at the US Capitol on January 6, 2022 in Washington.

(CNN) -- President Joe Biden spent Tuesday afternoon starting the process of courting crucial senators who will play key roles in confirming his future Supreme Court nominee, including Senate Minority Leader Mitch McConnell, as he got set to pick the man who will guide the nominee through the process.

Biden and Vice President Kamala Harris met with Sen. Dick Durbin, the Illinois Democrat who chairs of the Senate Judiciary Committee, and Sen. Chuck Grassley, the Iowa Republican who is the top GOP member on the committee. After that call, Biden called McConnell to discuss the nomination, a spokesperson for the Kentucky Republican said.

The outreach reflected the President's commitment to invite senators from both parties to the White House to hear their input on whom he should nominate to the nation's high court to succeed Justice Stephen Breyer. The President has pledged to nominate the first Black woman to the Supreme Court, and the White House has said it is currently casting a wide net as it considers potential nominees.

Just after the meeting began, two people familiar with the matter said former Alabama Sen. Doug Jones would be tasked with guiding the President's eventual nominee through the nomination process -- a role known in Washington as a "sherpa."

The day's events represent the wheels of Washington beginning to turn as Biden looks to replace Breyer, who has said he will step down at the end of the term, sometime in late June or early July. Biden has said he will name his nominee by the end of this month. Senate Majority Leader Chuck Schumer, a New York Democrat, has promised swift confirmation hearings.

Breyer had been under intense pressure to announce his retirement while Democrats still control the Senate and therefore have a clear path to confirming a nominee. There is a real possibility Republicans take control of Congress in the midterm elections later this year, which would likely dash hopes of Biden confirming his pick.

Democrats also got an unwelcome reminder of their slim margins in the Senate when Democratic New Mexico Sen. Ben Ray Lujan announced he had suffered a stroke last week. Lujan is expected to make a full recovery, a statement from his chief of staff said, but is staying at a New Mexico hospital while he recuperates, keeping him from Washington. Without Lujan in the nation's capital, Democrats lose their majority in the Senate.

The President is expected to choose a liberal judge who could serve on the court for decades. The confirmation would not alter the Supreme Court's ideological balance -- the court has six conservative justices appointed by Republican presidents and three liberals appointed by Democrats.

Jones, a longtime federal prosecutor who is best known for bringing members of the Ku Klux Klan to justice, is a longtime friend and ally of Biden. He was on hand in Atlanta during the President's voting rights speech late last month and is in frequent communication with the White House. The White House and Jones declined to comment.

Jones will be part of a broad team being assembled by the White House to work with the nominee. The team will also include veterans of judicial confirmation fights from the Obama administration.

Jones was also a leading contender to serve as attorney general in the Biden administration. He ultimately joined a Washington, DC, law firm, and has worked as a CNN contributor for the last year. He served in the US Senate from 2018 to 2021, winning a special election after Sen. Jeff Sessions resigned to become attorney general in the Trump administration. Jones, who positioned himself as a moderate Democrat, lost his race in the deeply conservative state in 2020 to Tommy Tuberville, who is the state's junior Republican senator.

Former President Bill Clinton nominated Jones to serve as United States attorney for the Northern District of Alabama in 1997. While serving as the top federal prosecutor in the state, Jones brought justice to the four African American girls killed in the 1963 bombing of the 16th Street Baptist Church in Birmingham, a defining moment of the civil rights movement.

The news of Jones' impending selection came just after Biden and Harris began meeting with Durbin and Grassley, at the White House on Tuesday to discuss the upcoming vacancy on the Supreme Court.

"The Constitution says, 'advise and consent, advice and consent,' and I'm serious when I say that I want the advice of the Senate as well as the consent to arrive on who the nominee should be," Biden told reporters in the Oval Office ahead of the meeting.

"We've done an awful lot of Supreme Court Justices together, Sen. Grassley and I, as well as with Sen. Durbin," added Biden, who served as chair of the Senate Judiciary committee from 1987-1995, "and we've worked together on a lot of court nominations overall, but particularly Supreme Court nominees."

Ahead of the meeting, Durbin said he has no agenda and was looking forward to meeting with the "former chairman of the Senate Judiciary Committee" to hear the President's views on the vacancy. Afterward, he said Biden "is in the process of choosing someone, wants to work with both sides and hopes we can finish 40 days after the nomination is sent up," which Biden said was an "average range" of confirmation processes for Supreme Court nominees.

Durbin added Biden asked the two senators to submit recommendations for candidate but did not discuss any specific names and said the choice of a Black woman was not discussed.

Grassley, an Iowa Republican, told reporters Tuesday ahead of the meeting that he would be "courteous to the President and try to answer his questions."

When he spoke to reporters afterward, Grassley said he told Biden that he was looking for a nominee "who is going to interpret the law and not make law. That's my job."

Grassley said that they did not discuss individual nominees, but they did talk about the timeline "very generally." The Iowa Republican said he impressed upon the President he wanted a "fair and deliberate" consideration process. Grassley added that the talk with Biden was "conversational."

The President spoke with Senate Minority Leader Mitch McConnell about the process on Tuesday. The President requested the call, according to a source familiar with it.

A spokesman for McConnell said after the call that the Kentucky Republican "believes the cornerstone of a nominee's judicial philosophy should be a commitment to originalism and textualism" and that he emphasized to the President "the importance of a nominee who believes in judicial independence and will resist all efforts by politicians to bully the Court or to change the structure of the judicial system."

Biden's pledge to fill the vacancy with a Black woman has been met with praise by many Democrats and criticism from some Republicans.

Texas GOP Sen. Ted Cruz said Biden's pledge was "offensive" and said that by doing so the President is telling other Americans "you are ineligible." Mississippi Sen. Roger Wicker, a Republican, said Biden's nominee will be a "beneficiary" of affirmative action on Friday.

After a caucus meeting on Tuesday, Sen. Mike Rounds, a South Dakota Republican, said Biden announcing he would be selecting a Black woman as a justice hurts the nominee's "credibility."

"He limits their ability to be identified clearly as the best possible candidate," Rounds said. "And then it restricts, and other people think well, 'They're being nominated only because [of that], and not because of their competencies.'"

Republican Sen. Josh Hawley, another member of the Judiciary Committee, said he still believed it was a "mistake" for the President to "basically say you have a quota" by announcing he was committed to nominating a Black woman to the Supreme Court.

When pressed about the fact that Ronald Reagan did the same thing by announcing he wanted a woman on the court, Hawley said that it was "ancient history."

Grassley, however, told CNN, "All we're concerned about their qualifications and their independence, their temperament. We ain't worried about whether they're man or woman, or black or white or pink."

"several schools of thought in terms of judicial philosophy."