Biden and Harris sworn in during historic inauguration 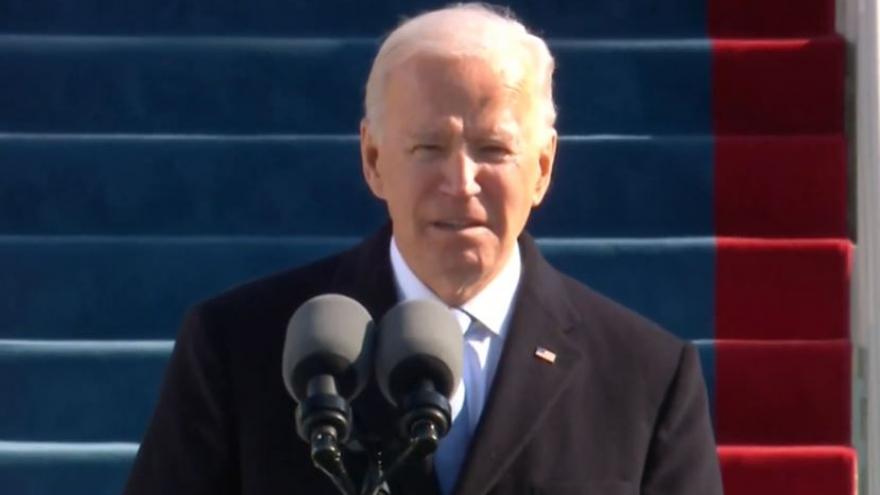 Harris will be the first female, the first Black and first South Asian vice president of the United States.

After a tumultuous year that began a new chapter of the civil rights movement as Americans took to the streets to protest against racial injustice and police brutality after the police killing of George Floyd, the swearing in was a remarkable achievement for a country that has often struggled to live up to its ideals of equality for all.

Harris took the oath on two Bibles -- one that belonged to former Supreme Court Justice Thurgood Marshall, one of her heroes who inspired her to pursue a career in the law, and that of Regina Shelton, a neighbor who cared for Harris and her sister Maya when they were growing up and attended church with her, where she was introduced to the teachings of the Bible. Harris has described Shelton as a "second mother to us."

After campaigning on a promise to heal a fractured nation, Biden will begin the work of uniting the country Wednesday when he is sworn in as the 46th president of the United States on the West Front of the US Capitol -- a mere two weeks after insurrectionists incited by President Donald Trump stormed the building and tried to overturn the election results based on Trump's lies.

Biden arrived at the Capitol Wednesday morning, after Trump -- the first president in more than 150 years to refuse to attend his successor's swearing-in ceremony -- had left Washington, DC. Vice President Mike Pence, who was in the Capitol when it was stormed by a violent mob earlier this month, and second lady Karen Pence walked out onto the inaugural stands to bipartisan applause.

More than 25,000 National Guard troops are in place to ensure that the nation's transfer of power can take place peacefully. Trump left the White House as president for the last time Wednesday morning, flying to Florida with first lady Melania Trump before the swearing-in ceremonies, dispensing with the tradition of greeting the incoming President and first lady at the White House and riding with them to the Capitol. CNN's Kate Bennett reported that White House chief usher Timothy Harleth will meet the Bidens later at the White House.

On his way out of the Washington area, Trump -- who was not wearing a mask -- again used the racist term "China virus" to describe the coronavirus, describing it in the past tense, and touted his administration's work on developing a vaccine.

He thanked his staff and family and wished the next administration "great success" but did not mention his successor by name.

"We love you, this has been an incredible four years," Trump said in unscripted remarks at Joint Base Andrews shortly before leaving for Florida. "We've accomplished so much."

"I will always fight for you. I will be watching. I will be listening."

After decades in politics, Biden will deliver the most important speech of his life on Wednesday at a time when the nation is gripped by a seemingly uncontrollable pandemic, an economic collapse that has left millions unemployed and deep divisions over issues of racial justice and police brutality. In a speech that is expected to span 20 to 30 minutes, Biden will speak about how he hopes to unite the country, and is expected to reflect on the theme at the root of his presidential campaign: restoring the "soul of thenation."

Biden plans to call on all Americans to meet the extraordinary challenges facing the nation by coming together around the idea that he often mentioned on the campaign trail: that there is nothing the country can't do "when we do it together," according to advisers to the President-elect. He will have his hand on the Biden family Bible, which has a Celtic Cross on the cover and has been a family heirloom since 1893. The President-elect has used the Bible each time he has taken an oath of office, both as a senator from Delaware and as vice president, and his son Beau Biden used the Bible when he was sworn in as attorney general of Delaware in 2007.

Vice President-elect Kamala Harris -- who will make history Wednesday when she is sworn in as the first female, the first Black and first South Asian vice president -- will be sworn in on two Bibles, that of former Supreme Court Justice Thurgood Marshall, one of her heroes who inspired her to pursue a career in the law, and one that belonged to Regina Shelton, a neighbor who cared for Harris and her sister Maya when they were growing up and attended church with her, where she was introduced to the teachings of the Bible. Harris has described Shelton as a "second mother to us."

The task of the incoming presidenthas been complicated by the fact that Trump has still not conceded the election, has impeded the transition between administrations and was consumed in his final days with planning his own departure ceremony and weighing whom to pardon. But Trump left the White House as a disgraced and diminished figure. CNN's White House team has reported that although dozens of current and former officials had been invited to the Wednesday morning farewell ceremony, many declined to attend. Pence said his final goodbyes to Trump on Tuesday.

Biden and Harris attended a service at the Cathedral of St. Matthew the Apostle in DC ahead of the inaugural ceremonies with Senate Majority Leader Mitch McConnell, Senate Minority Leader Chuck Schumer, House Speaker Nancy Pelosi and House Minority Leader Kevin McCarthy, in a show of unity and Biden's intent to work with leaders from both parties.

Honoring the victims of Covid-19

Biden has largely ignored Trump's final slights against the democratic process in the final hours before the inauguration as he demonstrates what a different president he will be.

After a year in which Trump denied the seriousness of the pandemic -- often brushing aside the painful loss of life with erroneous boasts that the US death rate was better than in many other countries -- Biden's first act upon arriving in Washington Tuesday afternoon was to honor the victims of the coronavirus in a solemn ceremony, making it clear that offering compassion and understanding to Americans will be just as central to his mission as preventing more tragedy.

Moments before 400 columns of light were illuminated on the edges of the Lincoln Memorial Reflecting Pool to honor the lives lost, Biden invited Americans to mourn as he grieved alongside them -- a moment that was extraordinary because there has been nothing like it during the Trump administration. The former vice president has long been defined by his innate ability to comfort strangers he has met throughout his journey in politics, because of his experience working through tragedies in his own life -- from the loss of his first wife and his infant daughter in a 1972 car accident to the death of Beau Biden in 2015.

He encapsulated the lessons of those personal experiences in his tribute to Covid-19 victims on the eve of taking the oath of office: "It's hard sometimes to remember, but that's how we heal," he said at the memorial. "It's important to do that as a nation."

Biden turns his focus Wednesday to his plans to unite the country, to broker compromise with political opponents, and turn the Trump administration's overly politicized response to the pandemic into a functional operation that can accelerate the delivery of vaccines to Americans and right the flagging US economy.

He wants to show that he will move swiftly to undo Trump's legacy,with aides readying about a dozen executive actions that Biden can take as soon as he is sworn into office that include rejoining the Paris climate agreement and ending Trump's ban on travel from predominantly Muslim countries. The President-elect plans to extend the moratorium on evictions and foreclosures for families affected by Covid-19 and to sign an order requiring masks on federal property and during interstate travel.

Plans for the inauguration itself have been reshaped not only by the pandemic, but also by the stunning security breach at the US Capitol on January 6. There will be no crowds in the streets or on the National Mall as the city remains in lockdown.

Biden plans to lay a wreath at the Tomb of the Unknown Soldier, joined by former Presidents Barack Obama, George W. Bush and Bill Clinton, along with their spouses.

But in an empty and heavily guarded city, the rest of the traditional inaugural festivities will be geared toward an audience that will be livestreaming at home.

The inaugural parade down Pennsylvania Avenue to honor the incoming administration will be largely a virtual one. Biden and Harris will have a presidential escort from 15th Street to the White House including the US Army Band, a Joint Service Honor Guard and the commander in chief's Guard and Fife Drum Corps. And the drumlines from the University of Delaware and Howard University will join that event to honor the alma maters of the incoming president and vice president.

The parade will be hosted by "Scandal" actor Tony Goldwyn and will feature comedian Jon Stewart, New Radicals and DJ Cassidy's "Pass the Mic" with performances by Earth Wind & Fire, Nile Rodgers, Kathy Sledge, The Trans Chorus of Los Angeles, The Washington Chorus and The Triumph Baptist Church Choir.

Several Americans who sought to lift spirits of their neighbors in the midst of the pandemic will also take part, including Dr. Jason Campbell -- a Portland, Oregon, doctor who became known as the "TikToc Doc" with his uplifting dance performances in scrubs from the hospital -- and Jason Zgonc, a 12-year-old trumpeter from Atlanta who played during hospital workers' break times throughout the summer.