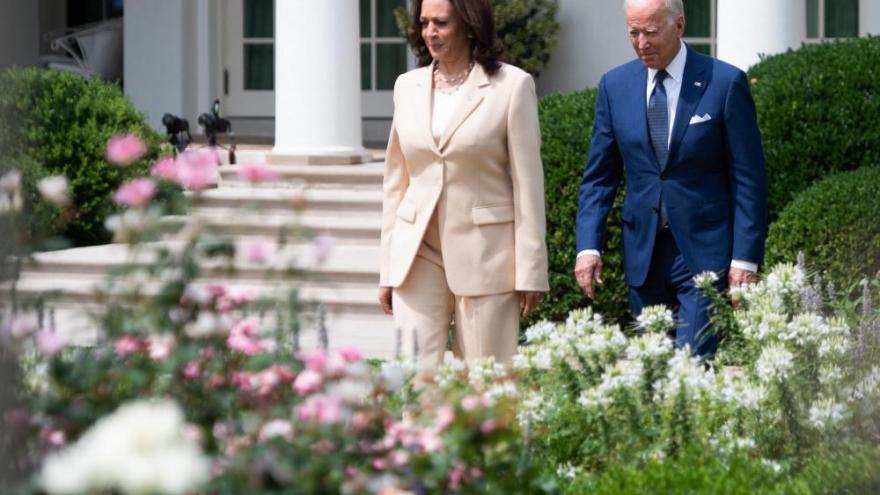 President Joe Biden (right) and Vice President Kamala Harris, seen at the White House on July 26, have been working the phones to try and bolster support for voting legislation teed up for Senate consideration this week.

(CNN) -- President Joe Biden and Vice President Kamala Harris have been working the phones to try and bolster support for voting legislation teed up for Senate consideration this week, even as the bill is set to run into a Republican blockade.

Biden spoke with Democratic Sens. Raphael Warnock of Georgia and Alex Padilla of California on what a White House official termed "the must-pass priority of legislation to protect Americans' constitutional rights from the systemic assault that Republicans have been mounting in state legislatures across the country, based on the Big Lie."

Harris, who Biden tasked with running on point on voting issues, spoke by phone with Sen. Angus King, a Maine independent, as well as Democratic Sens. Amy Klobuchar of Minnesota and Jon Ossoff of Georgia, the official said.

The calls come at a moment when the White House has been under increased pressure from outside groups to find a pathway forward for changes to counter state-level voting law changes pushed forward by Republican legislatures.

The bill set for a Wednesday procedural vote marks an effort to move a compromise measure, negotiated by Sen. Joe Manchin, the West Virginia Democrat, that would in part set minimum standards for voting access nationwide.

"If there is anything worthy of debate in this chamber, it should be protecting and strengthening our democracy," Senate Majority Leader Chuck Schumer said Monday as he moved to set up the vote this week. "With everything we're seeing at the state level the Senate must take action -- and we must take action now."

Yet even the pared back bill, which diverges from the For the People Act that Democrats placed high on their agenda at the start of the year, has garnered no support from Republicans -- a necessity to overcome a filibuster in the chamber.

With 50 votes in the chamber, Democrats need at least 10 Republicans to advance the measure. They currently have zero.

"There is nothing necessary or bipartisan about this naked power grab, so it will continue to go nowhere," Senate Minority Leader Mitch McConnell, who has vociferously opposed the Democratic efforts, said in a statement last week.

The vote count reality has presented a persistent challenge for Democratic leaders and Biden. While some Democrats have pressed to change the Senate rules to scrap the filibuster, Manchin has made clear that's a non-starter. Sen. Kyrsten Sinema, an Arizona Democrat, has also publicly stated her opposition to changing Senate rules.

It's a reality that has led to palpable frustration among activists, which have sought to pressure the White House to do more to press its case as former President Donald Trump has continued to perpetuate the lie that the 2020 election was stolen -- and pressure state-level Republicans to change voting laws.

"I would say that the lack of urgency in Congress, in the Senate, among Republicans in protecting people's fundamental right to vote is also frustrating to the President and to this administration," White House press secretary Jen Psaki said when asked Monday about that frustration.

White House officials for months have sought ways to address the issue outside of Congress, through executive action, the Justice Department and with dozens of White House staffers working on voting issues around the country.

"Legislation is one tool, but not the only tool," Biden said during a major speech on voting rights in July. "And it's not the only measure of our obligation to defend democracy today."