Biden and congressional leaders honor the late Sen. Bob Dole at US Capitol 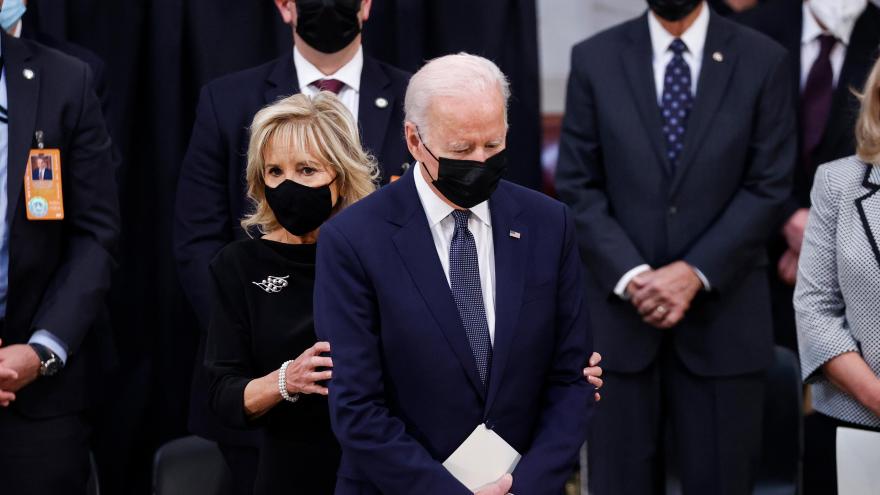 "We meet here in the very heart of American democracy -- the Capitol of the United States of America -- to receive a hero of that democracy for a final time," Biden said.

Dole, who had announced in February he was being treated for advanced lung cancer, died on Sunday. Republican and Democratic leaders gathered on Thursday to honor the longtime lawmaker and veteran's life and service to the nation.

Biden, who noted he served alongside Dole for 25 years in the Senate, described the Kansan as a "giant of our history."

"And that's not hyperbole," Biden continued. "It's real. Of wit and grace, of principle and persistence, of courage and conviction."

The President pointed to his own working relationship and friendship with Dole as an example of how lawmakers from different parties with opposing views should work toward common goals.

Biden said he and Dole disagreed on a number of things, "but not on any of the fundamental things. We still found a way to work together."

Biden quoted Dole's opinion piece in The Washington Post that published the day after his death, which reads: "I cannot pretend that I have not been a loyal champion for my party, but I always served my country best when I did so first and foremost as an American."

"When we prioritize principles over party and humanity over personal legacy, we accomplish far more as a nation," Dole's op-ed stated. "By leading with a shared faith in each other, we become America at its best: a beacon of hope, a source of comfort in crisis, a shield against those who threaten freedom."

Biden said: "May we follow his wisdom and his timeless truth and reach consensus on the basic fundamental principles we all agree on."

The President described Dole as having "great wit" and laughed as he recalled the late senator's reasoning for a vote.

"They once asked him why in God's name did he vote to continue to fund Amtrak. He said because if he didn't, Biden would stay overnight and cause more trouble. I commuted every day. True story. He was the deciding vote," Biden said.

Biden would take the Amtrak nearly every day when he commuted from Wilmington, Delaware, to Washington when he served in the Senate.

"A wounded warrior who spent decades carrying fellow veterans and Americans with disabilities on his shoulders -- Bob was the last of the greatest generation to run for president, but he was never stuck in the past. His roots ran deep, but he was always looking to new horizons," McConnell said.

Schumer said: "To pay tribute to Senator Bob Dole is to honor someone who redefined and elevated what it means to serve country. By 21, Bob had given more of himself than most of us give in a lifetime and then he kept going for 77 years after that."

Pelosi added: "As I stand here and see his coffin on the catafalque that was built for Lincoln with that flag draped over it, I'm sure many of you here will agree, it's hard to think of anyone who was more worthy to have a flag draped over his coffin because of his great patriotism to our country."

Dole served for 27 years as a US senator from Kansas and was Senate majority leader two times. He ran unsuccessfully for president against Bill Clinton in 1996 as the Republican nominee. It was his third presidential run. Dole also served as President Gerald Ford's running mate in 1976 after Nelson Rockefeller declined to stay on as vice president.

Dole was a World War II veteran who enlisted in the Army in 1942 at the age of 19 and was seriously wounded while trying to carry a fellow soldier to safety. He would go on to spend 39 grueling months in and out of hospitals, recuperating from his near fatal injuries, which left his right arm permanently disabled and his left arm minimally functional. Dole, who advocated for the nation's veterans throughout his career, received the Purple Heart twice and two Bronze Stars with an oak leaf cluster for his service in World War II.