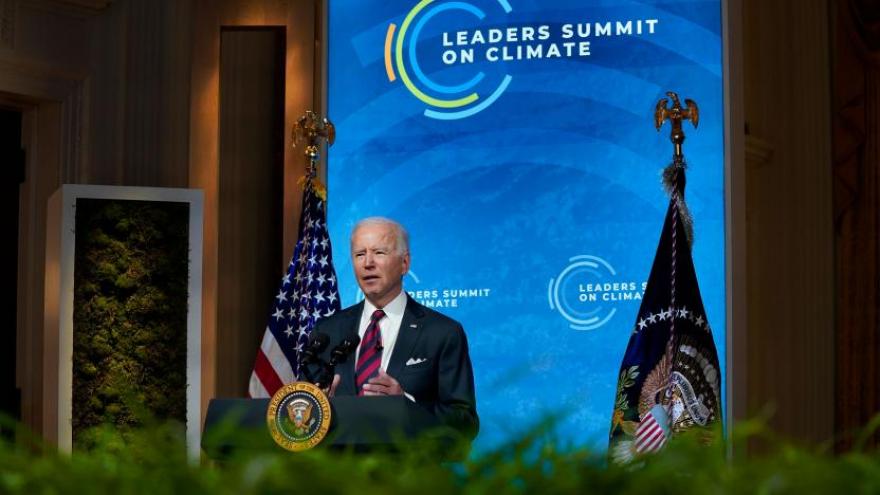 President Joe Biden on April 23 will aim to highlight the economic opportunities of climate action a day after announcing an ambitious new goal to reduce greenhouse gas emissions at his Leaders Summit on Climate from the White House.

(CNN) -- President Joe Biden on Friday highlighted the economic opportunities of climate action a day after announcing an ambitious new goal to reduce greenhouse gas emissions at the Leaders Summit on Climate from the White House.

During his remarks from the White House, the President said he is grateful to all of the world leaders who announced new commitments at the summit to curb emissions, and added that he felt the summit has so far yielded "great progress." He also stressed the importance of international cooperation, using his relationship with Russian President Vladimir Putin as an example that countries can have disagreements and still reach mutual cooperation.

"I'm very heartened by (Putin's) call yesterday for the world to collaborate and advance carbon dioxide removal, and the United States looks forward to working with Russia and other countries in that endeavor," Biden said. "It has great promise."

"President Putin and I have our disagreements, but he's talking about how you capture carbon from space," Biden later said. "As much as the President of Russia and I disagree, two big nations can cooperate to get something done -- and this time, get something done that benefits everybody."

"What else could there be that would have the opportunity to create so many jobs, while doing so much good?" Biden asked.

Biden also touted partnerships with other countries -- including India, Sweden, United Arab Emirates and the United Kingdom -- working to "de-carbonize critical sectors across the board."

"Every single one of you ... it's astounding. And I think this is part of that sort of fourth industrial revolution here. This is an opportunity and a process this time of doing the right thing and creating jobs of actually bringing our countries closer together," the President said.

Biden said he has directed Secretary of Energy Jennifer Granholm to "speed the development of critical technologies to tackle the climate crisis."

"No single technology is the answer on its own, because every sector requires innovation to meet this moment," Biden said. "This critical effort is going to propel the most impactful breakthroughs at home and around the world."

Friday's summit events were largely focused on underscoring what the White House has long pitched as a selling point for its ambitious climate goals -- that taking action on climate makes financial sense for global powers.

There were two sessions. The first was focused on "the importance of accelerating public and private investment in climate innovation." The second highlighted "the broad economic benefits of climate action, with a strong focus on job creation."

On Thursday, the President committed the US to reducing its greenhouse gas emissions by 50% to 52% below its 2005 emissions levels by 2030. While the goals are a part of the Paris climate agreement that Biden rejoined upon taking office, they are non-binding and the administration has not rolled out a plan on how the US will meet them.

Throughout the summit's first day, Biden and the White House repeatedly made the case that taking steps to address the climate crisis will make the US and global economy more resilient and competitive.

John Kerry, the special presidential envoy for climate, argued that "no politician, I think, could change what is now happening globally in the marketplace. And that is part of the message of what's happened" during the summit.

Biden first proposed a global climate summit on the campaign trail, pledging to convene world leaders within his first 100 days in office "to persuade them to join the United States in making more ambitious national pledges, above and beyond the commitments they have already made."

The wide range of leaders attending the two-day summit so far has included a number of American allies, such as France's Emmanuel Macron and the United Kingdom's Boris Johnson, as well as leaders with whom Biden anticipates having a more confrontational relationship, like China's Xi Jinping and Putin. While some countries reiterated during the summit that they were working toward their previously set climate goals, others, including Canada and South Korea, announced they were upping their targets.

Kerry told reporters at the White House on Thursday that almost all of the top 20 countries emitting the most greenhouse gasses pledged to take additional steps on climate.

"All 20 of them are here today, and almost all 20 of them were pledging to do additional things," Kerry said.

Kerry also indicated that he was pleasantly surprised during the summit by some of the comments made by non-allied leaders, like Putin and Brazilian President Jair Bolsonaro.

Bolsonaro appeared to moderate his tone on environmental issues during the summit, but critics have cast doubt on his new attitude.

"Some of the comments that President Bolsonaro made today surprised me ... that's pretty good. That works, if you do those things. The question is will they do them? And the question is what's the follow through and enforcement," Kerry said.

Kerry said he thought Putin was "pretty rational and put some decent visionary thoughts on things."

"I think there's room to hopefully have a discussion about this and we'll see if we can find some common ground. I think that's the most important summary of what I heard in terms of their comments today," Kerry added.