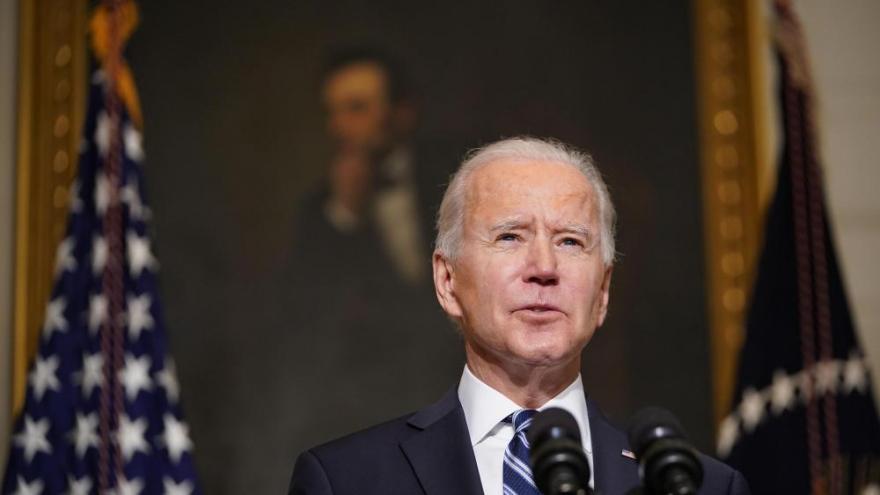 President Joe Biden, pictured here at the White House on Jan 27, will convene 40 of his foreign counterparts for talks on combating the climate crisis.

(CNN) -- President Joe Biden's ability to galvanize global momentum faces its first major test this week when he convenes 40 of his foreign counterparts for talks on combating the climate crisis.

At the virtual summit's center will be an aggressive new pledge to halve US carbon emissions, according to administration officials, a target number that has come to symbolize the new President's commitment to stave off global warming.

But at a broader level, the two-day summit that takes place on Thursday and Friday will amount to an attempt at reasserting American leadership to a world that's grown skeptical of promises from US leaders that can be easily reversed as soon as a new president enters office or can be quickly stymied by a gridlocked Congress. Some Biden administration officials have expressed concern over US standing in the international climate sphere after four years of neglect, and are hoping this week's summit will once again cement their seat at the table.

The results will be immediately apparent. The White House has made clear it hopes other countries will follow the United States in making new pledges to significantly slash their emissions, particularly major economies that produce the bulk of the world's greenhouse gasses. Biden's ability to wrest those announcements from his counterparts will be put to the test, making this week's summit a high-stakes gauge of his diplomatic skills.

Not all of the leaders beaming in are considered friends. Russian President Vladimir Putin and Chinese President Xi Jinping have both confirmed their attendance. White House officials have said the issue of climate change must be an area of cooperation, even as relations with Moscow and Beijing reach new lows. But what Putin and Xi say when it's their turn to speak -- and whether they'll use the occasion to ding Biden at his own summit -- remains anyone's guess.

A new kind of summit

Known to favor a back-slap and handshake style, Biden will be limited to a computer screen as he seeks to restore American credibility on the world stage while also convincing fellow leaders to make bold pledges to stave off global warming. Officials said the logistics of a virtual summit made pull-asides or individual bilateral meetings difficult to organize, and Biden has found previous virtual meetings with foreign leaders somewhat stilted.

This week's meeting is the largest virtual summit of world leaders to be convened over the past pandemic-altered year. When he begins traveling abroad, potentially as soon as June, Biden is expected to continue pressing on the climate issue leading up to a major summit in Scotland in November.

The urgency of the matter was underscored this week in a new report from the International Energy Agency, which estimated carbon emissions from energy use are on track to spike by 1.5 billion tons in 2021 as heavy coal consumption in Asia -- China, in particular -- outweighs rapid growth in renewable sources. That would be the second largest annual increase in energy-related emissions in history.

Aiming to reclaim the leadership mantle

Biden hopes this week's event will place the US back at the fore of global efforts to combat climate change after four years in which the issue was neglected. While former President Donald Trump frequently touted the cleanliness of American air and water, he took steps to roll back the carbon reduction efforts made by the Obama administration.

A few months into his presidency, Trump withdrew the United States from the Paris climate agreement against the urging of top leaders, who said global unity on the issue was paramount. At a heated G7 summit held cliffside in Sicily, leaders like German Chancellor Angela Merkel and Canadian Prime Minister Justin Trudeau sought to use their first encounter with Trump to press him into remaining in the deal.

But Trump refused, announcing in the Rose Garden he had been "elected to represent the citizens of Pittsburgh, not Paris."

White House officials insist progress on cutting emissions did not completely stop under Trump; instead it shifted to state and local governments, along with actions taken in the private sector. Indeed, after Trump declared he was looking out for Pittsburgh and not Paris, the mayor of Pittsburgh declared he would continue pressing ahead on reducing carbon emissions anyway.

Biden, who has already reentered the Paris deal, hopes to send a signal both to foreign leaders and an audience at home that he is adopting a different approach than the previous administration.

US credibility damaged under Trump

Repairing the damage done to the United States' credibility when it comes to international climate policy will be a tall order.

Trump's decision to leave the Paris deal marked the second time the US has bailed on an international climate agreement after it led the negotiations. The first exit was from the Kyoto Protocol, a previous climate pact that the US signed during the Clinton administration, only to drop out during George W. Bush's presidency.

"What we do at home does matter, and that characterization and how others see us acting will be both a beacon for what we want them to do and a signal that we are back and are fully engaging," a senior administration official said in previewing the summit on Wednesday.

"There is a significant sign that we expect action at this meeting. We're looking for people to make announcements, to raise their ambition, to indicate next steps that they intend to be taking to help solve the climate problem," the official said.

Biden plans to deliver inaugural remarks to launch the summit on Thursday morning before sending leaders into break-out sessions centered on themes like climate financing and strengthening resilience in countries vulnerable to the effects of climate change.

The major takeaway will be his pledge to cut US greenhouse gas emissions from their 2005 levels in half by 2030, though the White House was still finalizing that target, officials told CNN. The number had been closely watched, with environmental advocates suggesting anything less than a 50% cut would prove a disappointment.

When President Barack Obama first joined the Paris climate agreement, he pledged to cut emissions by a range -- 26% to 28% -- by 2025, making the new 50% cut a major jump. But other nations have begun announcing higher targets. The United Kingdom on Tuesday said it was setting a target of reducing emissions by 78% compared to 1990 levels by 2035.

Even a 50% cut will be difficult to achieve in the United States, where Republicans and some moderate Democrats remain wary of taking steps that could eliminate jobs in fossil fuels like natural gas and coal. A lack of political consensus in the United States has led to further wariness among foreign leaders at American promises on the issue.