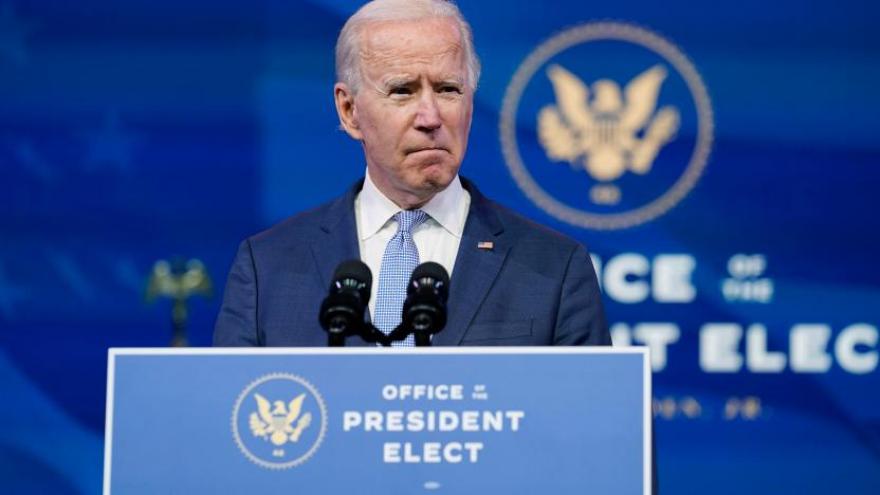 (CNN) -- President-elect Joe Biden is expected to unveil a major Covid-19 relief package on Thursday and his advisers have recently told allies in Congress to expect a price tag in the ballpark of $2 trillion, according to two people briefed on the deliberations.

The Biden team is taking a "shoot for the moon" approach with the package, one lawmaker in close contact with them told CNN, though they added that the price tag could still change. The proposal will include sizable direct payments to American families, significant state and local funding -- including for coronavirus vaccine distribution and other emergency spending measures -- to help those struggling during the pandemic.

Biden is set to announce the details of his plan in Wilmington, Delaware, Thursday evening.

Democrats hold only the slimmest of majorities in the House and the Senate, and Republicans have recently resisted efforts to pass Covid-19 relief on a multi-trillion dollar scale. But Biden's party believes it may have only a brief window to pass sweeping relief legislation and the President-elect has faced significant pressure from some Democrats to go big.

Brian Deese, Biden's pick to lead the National Economic Council, said Wednesday at a conference that the package will include $2,000 stimulus checks, and address other relief measures like unemployment insurance.

Biden's early focus on a sweeping relief package reflects the political reality that his first year in office will be defined by his ability to combat the virus and stave off an economic collapse.

And with just days until he's set to take office, the pandemic is now killing faster than at any point in 2020. The US reported its highest number of Covid-19 deaths in one day Tuesday: 4,327, according to Johns Hopkins University.

As a result, Biden is pushing to keep the upcoming Senate impeachment trial from consuming his agenda and overshadowing the early days of his administration. He's still awaiting word on whether the Senate will be able to pursue impeachment alongside Cabinet confirmation hearings and Covid-19 legislation.

Aides say Biden and his team are working behind the scenes with Senate Democrats -- and House impeachment managers -- to keep the impeachment trial as swift as possible, although it remains an open question how successful that might be.

In a statement Wednesday evening, Biden made clear that while the House's vote "to impeach and hold the president accountable" was "a bipartisan vote cast by members who followed the Constitution and their conscience," he doesn't want the Senate trial to impede his agenda.

"This nation also remains in the grip of a deadly virus and a reeling economy," Biden continued. "I hope that the Senate leadership will find a way to deal with their Constitutional responsibilities on impeachment while also working on the other urgent business of this nation."