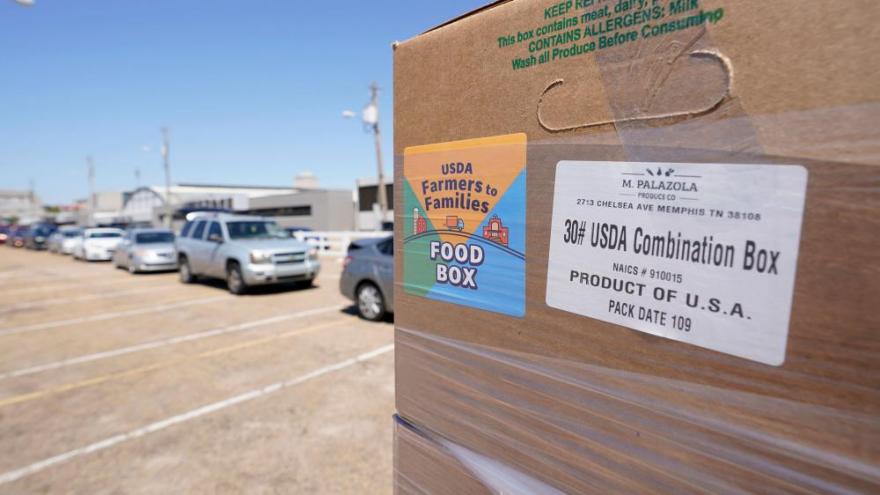 Hundreds of cars lined up at the Mississippi State Fairgrounds in Jackson, as their drivers sought to receive a Farmers to Families food box and two and a half dozen eggs distributed by the Mississippi Department of Agriculture and Commerce on April 21.

(CNN) -- As the country slowly climbs out of the pandemic, the Biden administration is ending a program that delivered nearly 167 million boxes of fresh food to families in need and helped farmers sell their produce at a time when supply chain disruptions forced them to dump milk and destroy their crops.

It's one of many emergency federal aid programs that the government must decide how to wind down in a way that doesn't create more problems for those still in need -- and some, including New Jersey Sen. Cory Booker, the new chairman of the Senate nutrition subcommittee, are calling on the government to keep a version of the food box program permanent to ensure needy families can get deliveries of fresh fruits and vegetables.

The $4 trillion in federal aid pumped into US economy over the past year has helped it bounce back, but the recovery has been uneven and is still far from complete. The nation is still down 8 million jobs compared to its pre-pandemic level. While the recession has nearly ended for high-wage workers, the unemployment rate for those earning less than $27,000 a year remains stubbornly high at nearly 28%, according a project at Harvard University tracking the recovery called Opportunity Insights.

Many families continue to struggle to put food on the table. As of March, nearly 9% of adults lived in households that sometimes or often didn't have enough to eat -- a share several times larger than at any point in 2019, according to the left-leaning Center on Budget and Policy Priorities.

Over the past year, the Capital Area Food Bank based in Washington, DC, helped deliver more than 1 million of the food boxes to families, making up nearly one-third of the meals it provided during the pandemic. The agency said it hopes the deliveries, known as Farmers to Families Food Box, will survive in some form even after the pandemic program ends this month.

"For our clients, the recovery is a long and slow one," said Radha Muthiah, Capital Area Food Bank's president and CEO. "The most important thing is to provide good, nutritious food for them and we certainly still need USDA as a partner."

The Farmers to Families Food Box program spent about $5 billion over the past year to hire private distributors that connected farmers with food banks and other non-profits trying to meet the increased need from hungry families.

There were some early concerns about the types of companies the USDA contracted with, including a Texas-based event scheduler, that had little experience distributing food. But despite the initial criticism, the program became quite popular. In the run-up to the election, former President Donald Trump required that the boxes include a letter from him touting the benefit. His daughter and adviser, Ivanka Trump, appeared helping to hand out the boxes at several press events.

It helped farmers sell their produce after supply chains were disrupted by the sudden closures of restaurants and schools. And it helped food banks and nonprofits that suddenly faced an explosion in demand and a simultaneous drop-off in donations.

The Farmers to Families Food Box program was brand new, created by the USDA last April using funds provided by the Families First Coronavirus Response Act. While the USDA has an existing program that purchases surplus commodities to send to food banks, the initiative focused on fresh fruits, vegetables, meat and dairy and combined it all into one box. USDA has released five rounds of funding for the program over the past year, using money from two subsequent Covid relief bills.

"This was revolutionary for USDA to actually be able to purchase and distribute everything so quickly," said Emily Broad Lieb, Clinical Professor of Law and Director of the Food Law and Policy Clinic at Harvard Law School.

A report she helped write on the program found that many farmers and distributors were pleased, yet offered recommendations to make the distribution more equitable, help more small- and mid-sized farmers and reduce food waste. Sometimes food banks had to unpack the combo boxes in order to keep dairy and meat refrigerated and then repack them again.

The price per box varied widely in the range of $40 to $100, when much of it could be bought for $20 at a grocery store, according to the report. USDA says the average price of a box fluctuated from as low as $28 to as high as $105.

A new pandemic problem: How to wind down emergency aid

In a statement, the USDA said the Farmers to Families program was meant to be a temporary effort to respond to severe market disruption caused by the pandemic.

"It served that purpose, although with serious challenges, and now we must make sure people are getting access to food through other, more reliable channels," it said.

Meanwhile, separate food aid programs have been expanded by Congress, including the Supplemental Nutrition Assistance Program, known as SNAP, and another program targeting women and children. Democrats are also pushing to make other new benefits for the poor permanent, like the expanded child tax credit, paid leave and the universal free school lunch program.

Relief programs like the direct stimulus payments to low-income Americans also have helped drive down the percentage of Americans struggling with hunger this year.

The agency has also started to offer a similar fresh produce box on a temporary basis through the The Emergency Food Assistance Program that existed before the pandemic. Normally that program allows state food banks to put in orders for produce months ahead of time and the USDA buys the food. But the goods are usually processed or packaged. The new boxes will contain fresh fruit and vegetables.

The Emergency Food Assistance Program would have been a better way to implement the emergency aid to being with, said Joseph Glauber, a Senior Research Fellow at the International Food Policy Research Institute and former USDA economist.

Instead, USDA was trying to address both the supply chain problem hurting farmers and the growing need from hungry families.

"The idea was laudable. But I think it is a mistake to try to address farm-level problems with an emergency food program. I think the fundamental goal should be to provide good food at the lowest cost possible so that you can feed the most people," Glauber said.

Farmers also received about $16 billion in direct relief aid from the federal government. While the major supply chain problems have been resolved, they're not back to normal. Many restaurants and office buildings remain closed or operating at less than full capacity.

"People are still as eager to be involved on the distributor side," said Melissa Ackerman, president of the Produce Alliance, a nationwide produce distributor that was contracted by USDA to deliver the boxes in several states.

She said that the agency tweaked the rules several times over the past year, improving the program each round.

"I think a step-down approach to ending the program would have been helpful," Ackerman said.