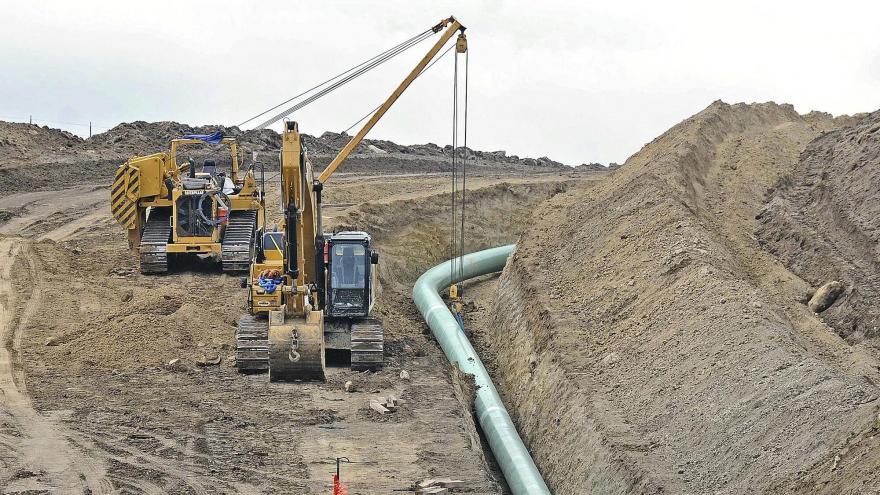 The Biden administration will not shut down the controversial Dakota Access Pipeline while an environmental review is conducted. Heavy equipment is seen at a site where sections of the Dakota Access pipeline were being buried near the town of St. Anthony in Morton County, N.D.

(CNN) -- The Biden administration will not shut down the controversial Dakota Access Pipeline while an environmental review is conducted, a blow to the environmental and tribal groups that have rallied against the project for years.

Government attorney Ben Schifman told a federal judge on Friday that the Army Corps of Engineers, which handles permits for the pipeline, "is essentially in a continuous process of evaluating" and gathering information. An attorney representing the Standing Rock Sioux tribe, which has been challenging the pipeline, said he is "deeply disappointed."

"The company gets to keep the benefits of operating the pipeline that was never properly authorized while the community has to bear the risks," said attorney Jan Hasselman. "It's not right. It's a continuation of a terrible history."

The Biden administration had been under enormous pressure from the pipeline's opponents to reverse the Trump administration's support of the project. A federal judge had put on hold further proceedings while the new administration got up to speed.

The 1,200 mile-long underground pipeline carries hundreds of thousands of barrels of oil through North Dakota, South Dakota, Iowa and Illinois. It began flowing in 2017.

The judge gave the pipeline backers until later this month to update their arguments in the case.

Pipeline opponents criticized Friday's announcement. "President Biden's actions today fail to live up to the climate and Tribal commitments he made, nor is it in line with the bold action he has taken since taking office," Sierra Club Executive Director Michael Brune said in a statement.

"The climate crisis demands that President Biden and his administration seize every opportunity to confront it. Today's decision is deeply disappointing, and we expect the courts to rightfully put an end to the Dakota Access Pipeline, just as we expect the President's future actions to meet his rhetoric and commitments," he added.