Biden administration will allocate more than $1.7 billion to Louisiana for hurricane recovery 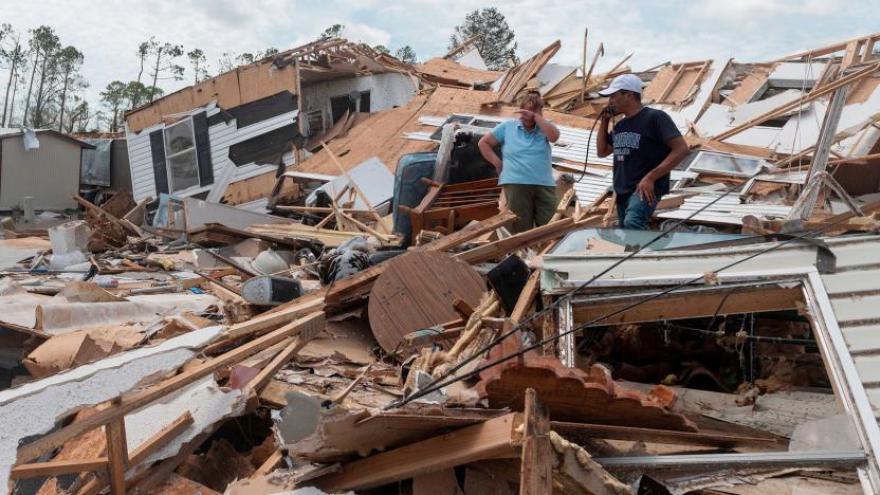 In this 2020, file photo, a couple sift through what remains of their destroyed mobile home following Hurricane Laura in Lake Charles, Louisiana.

(CNN) -- The Biden administration announced Tuesday that it will allocate more than $1.7 billion in recovery funds to disaster-weary Louisiana after two deadly hurricane seasons in a row.

Parts of the state were devastated by Hurricanes Laura and Delta in 2020, followed by Hurricane Ida in 2021. In the aftermath of those storms, more than 8,000 households are still in temporary homes -- trailers and other manufactured housing units -- and around 1,400 are in hotels, according to the Federal Emergency Management Agency.

The US Department of Housing and Urban Development is sending $3 billion in funds to 13 states, with Louisiana getting the lion's share. Separately, the city of Lake Charles will receive $10.7 million and Baton Rouge will receive $4.6 million in funding.

Louisiana Gov. John Bel Edwards, a Democrat, said he was grateful to HUD and the Biden administration for the funds, which "should provide Louisiana with an opportunity to implement a more effective, albeit late, recovery from Hurricanes Laura and Delta."

The allocation comes from a $28.6 billion disaster relief package Congress passed in September in response to the devastation from Ida and previous storms.

"These disaster recovery funds will strengthen recovery efforts and improve long-term, inclusive resilience to future disasters and climate impacts," HUD Secretary Marcia Fudge said in a statement. "Communities will have greater resources and focus to ensure equitable outcomes for underserved households that too often bear the brunt of climate-related disasters."

HUD's community development block grant funds can be used to relocate families to permanent housing, for economic revitalization, infrastructure and rebuilding in a way that's more resilient to flooding and storms.

Republican Rep. Garret Graves, who represents a district that was severely impacted by Ida flooding last summer, said the funds are welcome but should have come sooner, after Congress passed the disaster relief bill in September.

"This is welcomed news, but it shouldn't have taken six months for the funds to be allocated," Graves said in a statement. "We have hurricane victims that needed these funds back in September when we passed the law."

"Today's announcement is yet another example of the federal government showing up for the people of Louisiana," Carter said in a statement. The funds "will not only help communities rebuild and recover from Hurricane Ida and recent floods, but will help build long-term strength and resiliency in our systems."

Severe storms -- including tornadoes -- and flooding were in Louisiana's forecast on Tuesday. Earlier in the day, FEMA warned survivors still living in temporary housing like trailers and RVs to make plans to evacuate and pay attention to severe weather alerts.

"Repeated bouts of heavy rainfall can occur over the same areas, increasing the risk for flooding," FEMA's release said. "Move to higher ground if you hear of flood warnings."