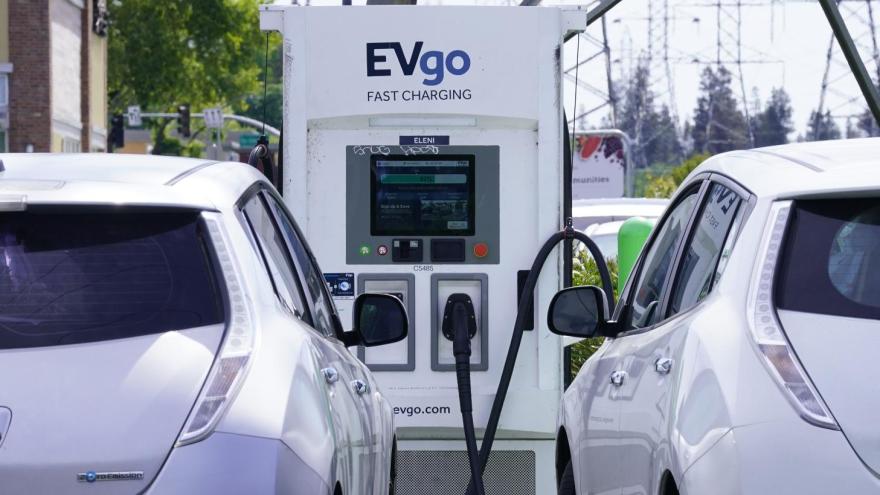 (CNN) -- Every gas station is essentially the same -- the nozzle fits every vehicle, the pump takes common credit cards and the price is posted on a big sign. The Biden administration wants to make electric vehicle charging stations a lot more like that.

Its new proposed rule would require the half-million electric vehicle chargers it plans to fund to be interoperable, similar to the way a gas pump works with any vehicle. Charging stations funded under the federal program would also be open to anyone -- prohibiting any membership requirements -- and set a common standard for payment and other technologies. The charging stations would be built along America's highways.

The proposal, which came from the Department of Transportation and the Department of Energy on Thursday, comes as consumers at the pump continue to pay record high gas prices. As CNN previously reported, the US average for the price of a gallon of regular gas hit $4.96 according to the most recent reading from AAA Wednesday. It marked the 12th straight day, and the 29th time in the last 30 that gas has set a record in America.

Though President Joe Biden recently acknowledged there was nothing he can do to bring down gas prices in the near term, his electric vehicle push is a part of his plan to address the climate crisis. In August of last year, the President announced a target that half of vehicles sold in the country by 2030 will be battery electric, fuel-cell electric or plug-in hybrid.

The new initiative is part of the administration's effort to ensure electric charging accessibility for all Americans and to target the key concerns preventing drivers from buying electric vehicles. Key among them is range anxiety, a driver's fear that he or she may not have enough charge to reach the next plug-in station.

The Biden administration is also targeting other concerns by requiring standardized pricing and payment systems, and pouring billions into other efforts like fast charging battery technology.

If finalized as drafted, the rule would apply to chargers funded by the federal infrastructure law signed last November. It includes about $5 billion that will go to states to build the charging networks, including funding that targets chargers along interstates and other major routes.

"To support the transition to electric vehicles, we must build a national charging network that makes finding a charge as easy as filling up at a gas station," said Transportation Secretary Pete Buttigieg.