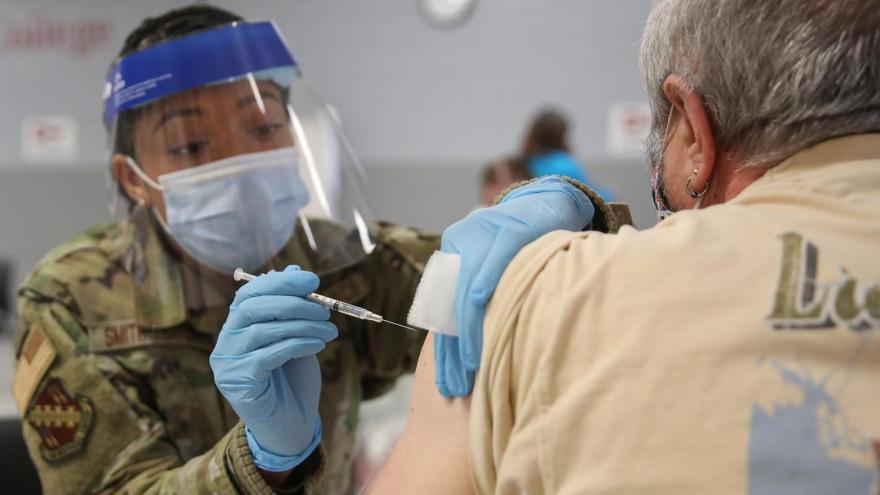 Sergeant Jurne Smith-Traylor (L) of the Illinois Air National Guard administers a Pfizer Covid-19 vaccine to Arthur Barsotti at a vaccination center established at the Triton College in River Grove, Illinois, on February 3, 2021.

(CNN) -- The Biden administration announced Friday that it will deploy approximately 1,000 troops across the United States to assist with coronavirus vaccination efforts.

The plans calls for the 1,110 service members to form into five teams to travel to five FEMA Covid-19 vaccination sites, according to the Pentagon. CNN reported earlier Friday that the orders are expected to call for the troops to be ready to deploy within 96 hours, according to two defense officials.

Slavitt confirmed Friday that part of the group will begin to arrive in California within the next 10 days to start operations in the area around February 15, "with additional vaccination missions soon to follow."

He touted the military's "critical role" in the vaccination sites, which he said will "ensure that every American who wants a vaccine will receive one."

Slavitt said the Pentagon will provide more details during a briefing Friday afternoon.

This effort is in response to a FEMA request to the Pentagon to provide military assistance providing vaccinations to meet President Joe Biden's goal of increasing the number of Americans who get shots during his first 100 days in office.

As of Friday morning, about 35.2 million vaccine doses have been administered in the United States, with about 6.9 million people having received their second dose, according to data reported by the US Centers for Disease Control and Prevention.

The Defense Department and FEMA have been discussing sending up to 10,000 troops. Each team will have personnel who can administer vaccines as well as support troops. The goal is for the military to eventually ramp up to administering approximately 450,000 vaccines a day.

US Northern Command in Colorado Springs is now expected to work out exactly which troops will go and could potentially include active-duty personnel and National Guard.

There is already a separate National Guard deployment across the country. "There are over 20,000 national guardsmen deployed providing COVID support including at over 216 vaccine sites in 36 states and territories,' said Max Rose, Covid Senior Advisor to the Secretary of Defense.

The Pentagon has also kept hundreds of personnel on notice to be prepared to deploy to help overwhelmed health care facilities and hospitals around the country.