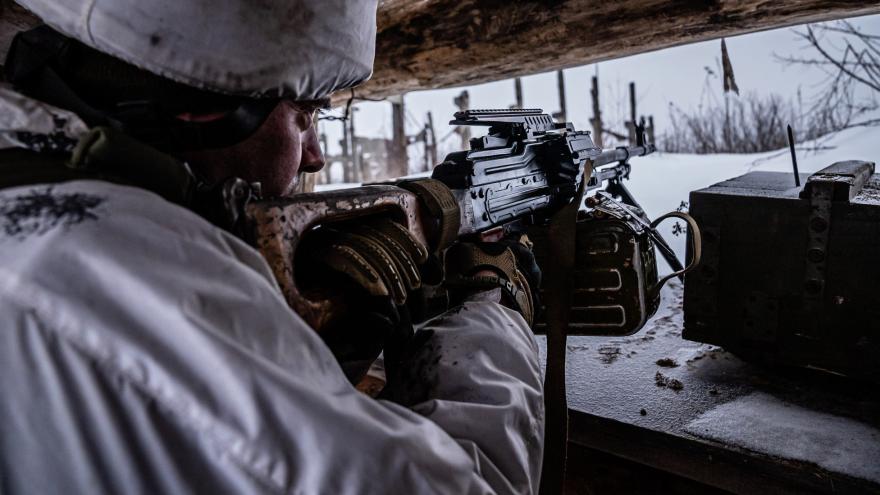 (CNN) -- The Biden administration will hold two classified bipartisan briefings Tuesday for House and Senate leadership aides and committee staff on the crisis with Russia and Ukraine, a White House official told CNN.

The briefings come as up to 8,500 US troops have been put on heightened alert for a possible deployment to Eastern Europe as Russian troops mass on Ukraine's border. They were first reported by Punchbowl News.

Senate Majority Leader Chuck Schumer and House Speaker Nancy Pelosi have requested all-member briefings in each of their chambers. Schumer has requested a classified briefing for all 100 senators on the situation for next week, a source familiar said.

The White House official said they are working to hold all-member briefings for the House and Senate "in the coming days."

Tuesday's classified briefings build on "dozens of engagements" the administration has held on the matter in recent days, including conversations between nearly 20 members, Secretary of State Antony Blinken and Deputy Secretary Wendy Sherman. Additional engagements are planned this week, the official added.

The briefings come as the US warns that a potential Russian invasion of Ukraine could be imminent. The State Department on Sunday reduced staffing at the US embassy in Kyiv, Ukraine, with the departure of nonessential staff and family members out of "an abundance of caution."

Biden discussed concerns over Russia's troop build up at Ukraine's border in a secure video call Monday with European leaders. The group went over diplomatic efforts to forestall an invasion and preparations to punish Moscow should one take place.

That included "preparations to impose massive consequences and severe economic costs on Russia for such actions as well as to reinforce security on NATO's eastern flank," the White House said in a readout of the call.

The US says it is prepared to impose economic sanctions on Russia that it says would effectively cut off Russia from the Western economy in the event of an invasion.

Last week, Biden suggested some disunity within NATO over possible sanctions should Russia proceed with an incursion into Ukraine that fell short of a full invasion.

But after Monday's call, Biden said there was "total unanimity with all the European leaders." The leaders of the United Kingdom, Germany, France, Italy, the European Union and Poland -- along with the NATO secretary general -- were on the call.

The Biden administration has been in the final stages of identifying specific military units it wants to send to Eastern Europe, according to multiple US and defense officials.

The President discussed options for bolstering US troop levels in the Baltics and Eastern Europe with his top military officials during a briefing at Camp David on Saturday, according to a senior official. Sending military reinforcements to Eastern Europe would be intended to deterrence and reassure allies. There hasn't been any suggestion US combat troops would deploy to Ukraine or take part in any combat roles.