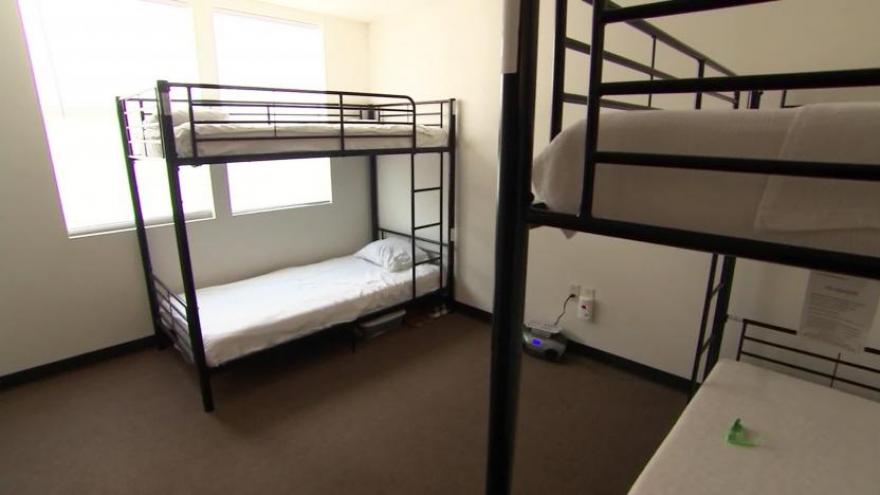 The Biden administration is spending at least $62 million a week to care for unaccompanied migrant children in the custody of the Department of Health and Human Services.

(CNN) -- The Biden administration is spending at least $62 million a week to care for unaccompanied migrant children in the custody of the Department of Health and Human Services, according to government data.

Over the last month, HHS announced or opened at least 11 new facilities with more on the way, leaning on convention centers, military sites and influx space to try to get kids out of Border Patrol stations, which are akin to jail-like conditions and not suited for children. The department oversees a shelter network for migrant children, but that capacity was reduced over the last year in response to the pandemic, causing the agency to scramble to bring more expensive temporary facilities online.

The daily cost per child is more than twice that of the department's already established shelter program -- at approximately $775 per day, compared to around $290 per day -- according to figures shared with CNN and first reported by the Washington Post. HHS cited the need to develop facilities and hire staff over a short period of time among the reasons why temporary shelters are more costly.

Combined, the sites will provide more than 16,000 beds to accommodate children, in addition to the about 13,721 beds in the department's permanent shelter program, which until recently had been operating under a reduced capacity due to Covid-19.

There are around 8,876 children occupying beds in the department's licensed shelter program and about 8,124 children at the temporary sites, as of Thursday, according to HHS.

Despite the higher expense, a White House official told CNN this week that there are no plans to ask Congress for additional funding as of now. In 2019, during that year's border crisis, the Trump administration asked for $4.5 billion in emergency funding.

Asked about the steep costs Friday, White House press secretary Jen Psaki cited 2019. "The prior administration requested -- and received -- nearly $3 billion in supplemental funding from Congress for the (unaccompanied children) program back in 2019," she said, adding that before then, millions more had been transferred to the program.

In March, US Customs and Border Protection encountered 18,890 unaccompanied children, a record high and nearly double the number of apprehensions of children in February, according to the agency's data. The spike in arrivals has led to overcrowded conditions in border facilities and as a result, an urgent need to open facilities to accommodate children.

"By activating temporary shelters -- and having potential shelters on reserve status -- (the Office of Refugee Resettlement) has the capacity to respond to ever-changing levels of referrals and in this case an emergency situation," the department said in a statement, adding that it's difficult to predict final costs given continued need.

In March 2021, 13,832 unaccompanied children were turned over to the care of the Office of Refugee Resettlement, the federal agency under HHS tasked with the care of children, marking the most referrals in the program's history, according to HHS.

The growing number of children in HHS custody indicates some level of progress, as the number of unaccompanied migrant children in Border Patrol facilities dwindles. But it's also likely to drive up the weekly cost.

Still, the number of children encountered daily is surpassing those discharged from HHS, meaning there are more arrivals than releases to sponsors, indicating a need for more capacity.

"The basic problem right now is that each day more children are arriving than are being released to parents and sponsors. There will keep being a need for more capacity, unless either the number of arriving children goes down or HHS is able to more quickly release children," said Mark Greenberg, a senior fellow at the Migration Policy Institute and former HHS official.

"The important thing it's accomplishing is helping to get children out of CBP holding facilities, which are severely crowded, not a good place for children during any circumstances, particularly so during the pandemic," Greenberg said, referring to building up capacity.

The average length of stay in HHS custody is 31 days, according to the internal documents obtained by CNN. The time in custody differs across sponsor categories, ranging from parents or guardians to distant relatives. For example, children in custody who have a parent or guardian in the US are likely to be discharged to that sponsor in 25 days on average, compared to an unrelated sponsor or distant relative, which can take 54 days, the documents show.

In more than 80% of cases, the child has a family member in the United States, according to the Department of Homeland Security.

The Biden administration is trying to fast-track that process and encourage parents or guardians, many of whom are undocumented, to collect their kids from custody. But until a sponsor is identified and vetted, children remain in US custody.