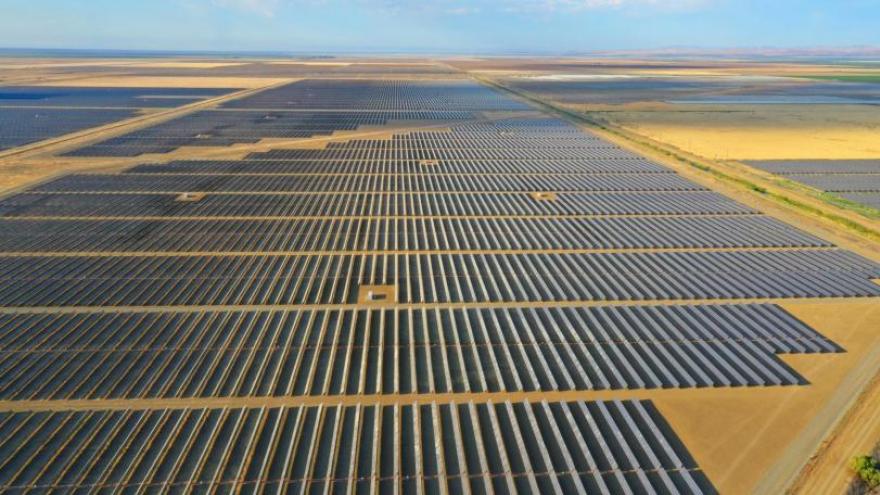 Solar energy has the potential to power 40% of US electricity by 2035, the Biden administration says. Pictured is Westlands Solar Park in the San Joaquin Valley of California, which is the largest solar power plant in the United States.

(CNN) -- A new blueprint from the Biden administration shows how solar energy could play a massive role in transitioning the United States' power sector to clean energy, and achieve the President's ambitious goals to decarbonize the US economy.

The Solar Futures Study from the Department of Energy, released Wednesday, shows that by 2035, solar energy has the potential to power 40% of the nation's electricity and employ as many as 1.5 million people — without raising electricity costs for consumers.

Though the report shows reaching 40% solar is possible, that goal is contingent on Congress passing legislation that incentivizes renewable energy as well as the widespread adoption of solar power. Congressional Democrats are currently negotiating a $3.5 trillion spending bill that includes tax credits for wind and solar power, but it faces a tough fight this fall.

"The study illuminates the fact that solar, our cheapest and fastest-growing source of clean energy, could produce enough electricity to power all of the homes in the US by 2035 and employ as many as 1.5 million people in the process," said Secretary of Energy Jennifer Granholm.

Still, whether that renewable energy transition can happen depends on the amount of tax credits Democrats in Congress can pass in their upcoming budget reconciliation bill. While final details are still being worked out, a coalition of environmental groups is pushing Congress to fund between $191 billion and $265 billion for 10-year direct-pay tax credits for renewable energy like wind and solar.

Solar currently accounts for about 3% of US electricity supply. The study shows the US would need to quadruple its yearly solar capacity additions by 2035, providing 1,000 gigawatts of power to ensure most of the electricity grid was powered by renewables. By 2050, solar energy could provide 1,600 gigawatts of energy to the US grid grid, which DOE projects would provide more electricity than is currently consumed in all residential and commercial buildings in the US today.

"It is now possible to envision—and chart a path toward—a future where solar provides 40% of the nation's electricity by 2035," Becca Jones-Albertus, the director of DOE's Solar Energy Technologies Office said in a letter introducing the report. "This growth is necessary to limit the impacts of climate change, and our work to realize this vision could not be more urgent."