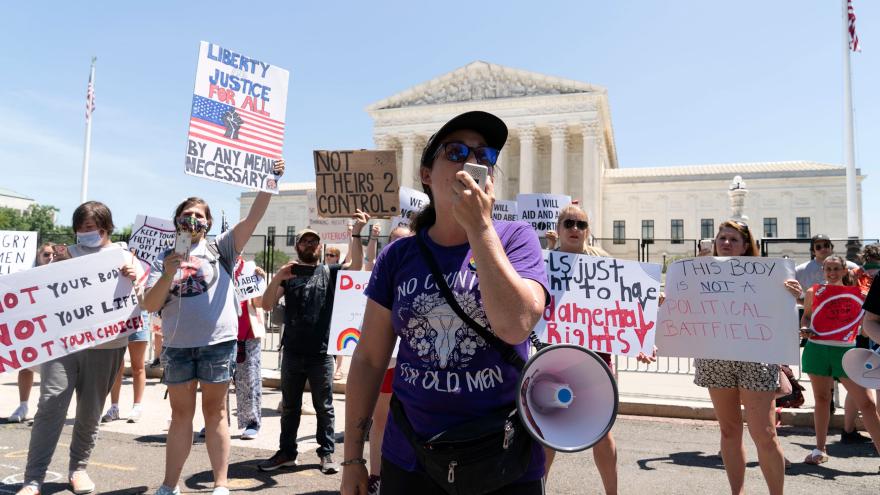 (CNN) -- In new clarifying guidance announced Monday, the Biden administration said that federal law preempts state abortion bans when emergency care is needed and that the federal government can penalize institutions or providers that fail to provide abortions as needed to treat medical emergencies.

"Under the law, no matter where you live, women have the right to emergency care -- including abortion care," HHS Secretary Xavier Becerra said in a news release Monday. "Today, in no uncertain terms, we are reinforcing that we expect providers to continue offering these services, and that federal law preempts state abortion bans when needed for emergency care."

In more than a dozen states, legal fights are underway over abortion bans and other laws that strictly limit the procedure after the US Supreme Court overturned the Roe v. Wade decision June 24.

In a letter to the nation's health care providers on Monday, Becerra said a federal statute called the Emergency Medical Treatment and Active Labor Act, also known as EMTALA, protects providers' clinical judgment and the actions they take to provide stabilizing treatment to pregnant patients who are under emergency medical conditions, regardless of restrictions in any given state.

The act has been on the books since 1986. It specifically requires all patients get appropriate medical screening, examination, stabilizing treatment and facility transfer.

The administration said examples of emergency medical conditions include, but are not limited to, ectopic pregnancy -- when the fertilized egg grows outside a woman's uterus -- and complications of miscarriages. Stabilizing treatment could include abortion.

Becerra said that if a state law bans abortion and does not include an exception for the life or health of the pregnant person, that law is preempted by the federal statute.

"We heard a lot from physicians that we needed to be clearer on these points because people were still too scared to treat people," a senior adviser with HHS said in a background briefing. The new guidance is "meant to try to provide that reassurance here on the clinical judgment of these physicians and hospitals."

HHS said it will do everything within its authority to ensure that patients get the care they need.

The statute applies to emergency departments and other specific clinical settings. Providers also will not have to wait for a patient's condition to worsen to be protected.

Investigation and enforcement under the statute depend on people making a complaint to the government.

"We are making enforcement a priority," the senior official said.

A memo from the Centers for Medicare and Medicaid Services said that hospitals should ensure that all staff who may encounter an emergency situation with a pregnant person be aware of the hospital's obligation under EMTALA.

The statute also has a whistleblower provision that prevents retaliation by a hospital against an employee who refuses to transfer a patient with an emergency medical condition who has not been stabilized.

"Health care must be between a patient and their doctor, not a politician," Becerra said. "We will continue to leverage all available resources at HHS to make sure women can access the life-saving care they need."

When the Supreme Court decision came down, several doctors groups criticized the decision as one that interferes with their ability to do their jobs. One, the American College of Obstetricians and Gynecologists, called it "a direct blow to bodily autonomy, reproductive health, patient safety, and health equity in the United States."

On Friday, President Biden signed an executive order that is meant to protect access to medication abortion, patient privacy and emergency contraception, and to launch public education efforts.

Biden directed Becerra to submit a report on actions his department is taking to ensure reproductive health care access. HHS will take action to expand access to emergency contraception and long-acting reversible contraception like intrauterine devices.