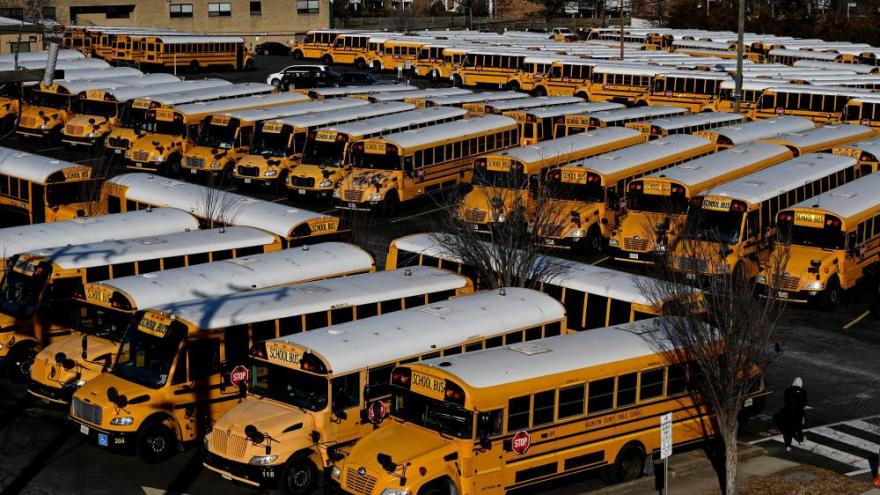 School buses are parked at the Arlington County Bus Depot, on January 26, in Arlington, Virginia.

(CNN) -- The Biden administration is rolling out more stringent emissions standards for heavy-duty vehicles like large trucks and buses and announcing more than $1.3 billion in funding to deploy more clean transportation and school buses.

The US Environmental Protection Agency is also announcing stricter standards regulating nitrogen oxide (NOx) emissions from heavy-duty trucks, updating the standard for the first time since 2001. In addition, the EPA said it plans to tighten greenhouse gas emissions standards for medium and heavy-duty vehicles -- standards on which the agency is now accepting public comment.

Much of the Biden administration's focus on cutting vehicle emissions has so far been on light-duty vehicles like passenger cars. Transportation emissions account for the biggest source of greenhouse gas emissions in the US, and light duty vehicles account for 58% of total emissions.

Still, heavy-duty vehicles like big trucks and buses make up about 23% of total emissions; though there are fewer of them on the roads than smaller cars, they emit a lot of pollution and planet-warming greenhouse gases.

In addition to the new regulation, Vice President Kamala Harris held a Monday event to announce new spending on cleaner transit and school buses provided by the bipartisan infrastructure law. Harris and the Department of Transportation announced the more than $1.3 billion in 2022 funding to help states buy electric transit buses.

"Imagine a future: The freight trucks that deliver bread and milk to our grocery store shelves and the buses that take children to school and parents -- all the heavy-duty vehicles that keep our supply lines strong and our economy to grow -- imagine that they produce zero emissions," Harris said at the event. "We are all in the midst of a turning point."

The administration is also rolling out $17 million for electric zero-emission and low-emission school buses. The new funding comes in addition to $7 million through the American Rescue Plan to replace older diesel school buses with electric buses in underserved communities.

"This proposed rule would ensure that the heavy-duty vehicles and engines that drive American commerce and connect people all across the country are as clean as possible, while charting to advance zero-emission vehicles in the heavy-duty fleet," EPA Administrator Michael Regan said Monday.

The agency is proposing two options for its new rule; both would go into effect in 2027, but one option would implement even stronger standards in mileage year 2031. This option would bring down NOx emissions under 400,000 tons annually, compared to about 500,000 tons for the less stringent option. The current baseline is over 900,000 tons of NOx per year.

But one state regulator said the interim NOx rule is missing the bigger picture -- a transition to zero-emissions trucks.

Zero-emissions trucks are on the horizon

While the EPA's new rule focuses heavily on cutting nitrous oxide emissions, the trucking industry and state pollution regulators are watching for the emergence of zero-emissions trucks.

The California Air Resources Board -- which sets California vehicle emissions standards -- already passed its own rule requiring truck makers to sell more zero-emission trucks in the state, and other states are following.

The agency announced Monday it is looking at updating federal regulations due to "these market shifts to zero-emission technologies, which the agency did not foresee when it issued the 'Phase 2' GHG emission standards" for medium and heavy-duty vehicles. But the EPA is still taking comment on new greenhouse gas rules for heavy-duty vehicles, not issuing a new rule just yet.

The trucking industry has been wary of a fast shift to zero-emissions vehicles, due to the increased cost of the vehicles themselves and relative lack of charging stations for heavy-duty trucks that drive all over the country.

"If they don't feel they meet the same needs, they're just going to keep their old trucks longer," said Jed Mandel, president of the Truck and Engine Manufacturers Association -- a trade association representing engine and truck manufacturers.

Mandel added that while zero-emissions "technology is coming and we want it to come," truck manufacturers also "don't want this rule to be so stringent as to take away the investment needed for the real prize which is zero-emissions vehicles."

California setting its own standard is important because of the state's massive economy, which has a huge influence on the national market. The Biden administration is soon poised to reinstate California's waiver to set its own stricter vehicle emission standards -- which was rolled back by the Trump administration.

The federal waiver will be a major step in the state being able to move the ball forward on zero-emissions trucks, which Sperling said will be going a step further than the federal government.

"Clearly California has taken the lead, and California wants the feds to closely follow," Sperling said, adding that is important because the majority of trucks traveling through California are out-of-state trucks that don't have to comply with the stricter standards.

"I would say California wants everyone to go forward fast" on zero-emissions vehicles, Sperling said. "If you look at political realities, the attitude is yes, we have to be the leader because the feds are not, and other states are not following fast."