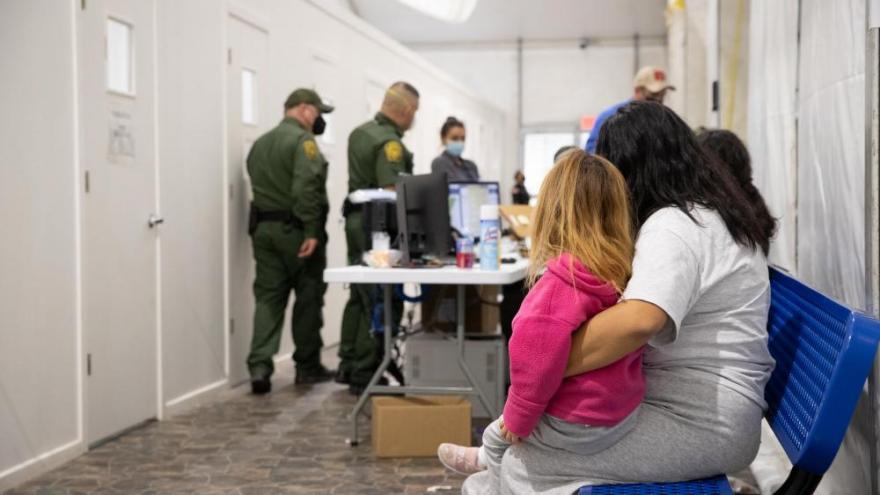 The temporary processing facilities in Donna, Texas on February 25.

(CNN) -- The Biden administration could need at least 34,100 additional beds to keep up with the projected number of unaccompanied kids arriving at the US-Mexico border through September, according to internal government estimates obtained by CNN.

The uptick in minors crossing the US southern border alone has posed a steep challenge for the administration, as officials have scrambled to find space to house them. The shortage in shelter space, due in part to constraints related to the coronavirus pandemic, has left thousands of children in border facilities that are designed for adults and not suitable for children.

As of Thursday, the Biden administration had nearly 5,500 unaccompanied migrant children in Customs and Border Protection facilities, which are akin to jail-like conditions, and more than 12,550 children in the custody of the Department of Health and Human Services, which is charged with the care of migrant children.

Over recent days, HHS has announced a string of new facilities, leaning on convention centers, military sites and influx shelters, to accommodate children. But government projections indicate they'll need far more and likely additional funds, though officials have not indicated that they plan to request more money from Congress.

The internal estimates obtained by CNN take into account current trends as well as previous influxes of migrant children, and show an anticipated month-by-month increase that could result in at least 158,000 unaccompanied children arriving from April through September.

They also reveal a record number of children crossing the border alone in March -- around 14,600 -- and an upward trend, hitting more than 25,000 in the summer months.

The estimates assume, in part, no changes in policy relating to kids and that the rate at which children are being transferred from Border Patrol to HHS remains the same -- a process the administration is trying to fast track.

HHS and the Department of Homeland Security did not immediately return requests for comment.

President Joe Biden reacted to the overcrowded conditions in Border Patrol facilities during his first press conference this week.

"Is it acceptable to me? Come on," Biden said. "That's why I've been working from the moment this started to happen to try to find additional access for children to be able to safely -- not just children, but particularly children -- to be able to safely be housed while we follow through on the rest of what's happening. That is totally unacceptable."

A senior US Border Patrol official told reporters Friday that the number of migrants arriving at the US-Mexico border continued to rise in March and is expected to tick up for a "couple" months.

The numbers "have continued to increase throughout March, and I fully expect that over the next couple of months, we're also going to see some increases, because that's how traffic traditionally impacts the Border Patrol," the official said.

The spring and summer months are traditionally busier at the US-Mexico border, but the Covid-19 pandemic has "thrown a wrench into the whole process," the official said, pointing to unique challenges there compared to past years and the overwhelming number of children.

"Unfortunately, when you start to see, you know, upwards of six, seven hundred unaccompanied children encountered in a 24-hour period, and you're only able to transfer four or 500 on a given day, obviously those numbers are going to stack up," the official said, adding that "we need to do a better job" ensuring that Health and Human Services has enough capacity to shelter the children.

"We need to speed up the transfer of these children from our custody to their custody much faster," the official said.

A second soft-sided influx facility in Eagle Pass, Texas, will be operational at the beginning of April, the official said, with plans to open additional facilities.