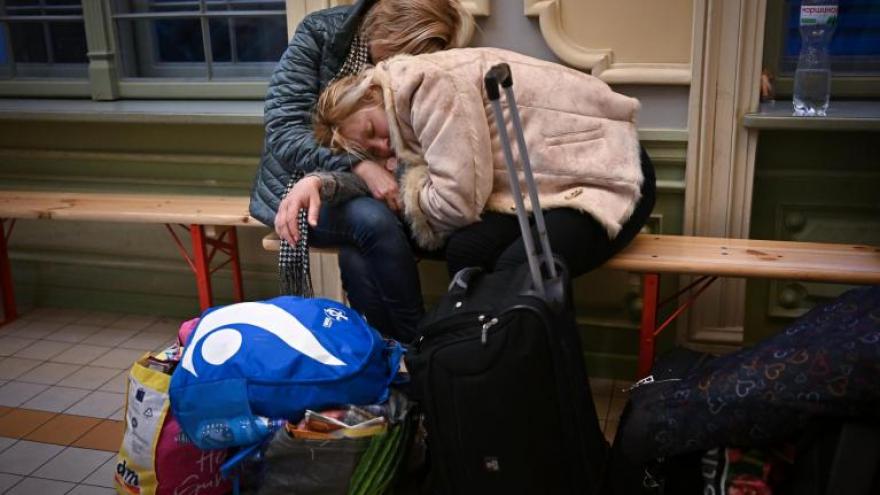 People, mainly women and children, make their way through Przemysl railway station after journeying from war-torn Ukraine on March 30 in Przemysl, Poland.

(CNN) -- The Biden administration is preparing to roll out a program intended for Ukrainian refugees that would expedite the process for those trying to come to the United States, according to two administration officials.

The program comes on the heels of President Joe Biden's commitment to accept up to 100,000 people fleeing war-torn Ukraine through a range of legal pathways and a focus on family reunification. More than two weeks since that announcement, the administration has yet to provide additional details and hundreds of Ukrainians have decided to go to the US-Mexico border to gain entry to the country.

The new parole program, which could start as early as next week, is expected to help people interested in coming to the US and allow them to stay in the country temporarily. According to one administration official, individuals would need to have a sponsorship application filled out on their behalf by someone in the US in order to come to the country. Details of the plan are still being finalized.

The State Department and the Department of Homeland Security are involved in the program, according to the administration official. The approach is similar to the one taken with Afghans following the fall of Kabul.

CNN reached out to the White House for comment. The State Department referred CNN to the Department of Homeland Security, which did not immediately return a request for comment.

Since Biden announced last month he would welcome up to 100,000 Ukrainians, officials have been discussing how best to prioritize applicants, including how to accommodate refugees fleeing potential persecution, according to a person familiar with the deliberations.

One official said the White House is focused partly on protecting vulnerable refugees, including those with specific medical needs or individuals from third countries who had already fled to Ukraine to escape persecution elsewhere -- including dissidents, journalists and LGBTQ people.

The policy process, including which mechanism people fleeing Ukraine could use to come to the United States, has been a topic of conversations among administration officials since the President's announcement.

Still, Biden's aides continue to believe most of the 4 million-plus people who have fled Ukraine would prefer to remain in the region. The 100,000 figure Biden unveiled while visiting Brussels in March doesn't necessarily reflect the number of refugees US officials believe will ultimately seek entry to the United States, an official said.

The US has provided billions of dollars in humanitarian assistance to help countries neighboring Ukraine -- including Poland, where Biden visited with refugees and aid workers last month.

On Monday, United Nations High Commissioner for Refugees Filippo Grandi met with officials from the National Security Council at the White House to discuss the refugee crisis in Europe. He also met with Secretary of State Antony Blinken on Tuesday.

The usual refugee resettlement route to the US is a slow and cumbersome process, often takeing years. In March, only a dozen Ukrainians came to the US through the program and they likely had applied years ago, well before Russia invaded Ukraine.

Dozens of Ukrainians are often resettled in the US monthly, but the closure of commercial airspace in war-torn Ukraine led to canceled flights and kept Ukrainians prepared to come to the US as refugees from leaving, according to refugee advocates. Their flights are gradually being rebooked from other countries.

In a recent bipartisan letter, lawmakers, mostly Democrats, suggested that the administration also "utilize existing administrative options to improve efficient processing for Ukrainians outside of the United States who already qualify for immigration benefits." That includes, the lawmakers said, providing additional resources to US embassy personnel in Europe who are involved in processing immigrants and refugees and waiving immigration application fees.

Refugee advocates, who are intimately involved in the resettlement of refugees, have expressed concern about admitting Ukrainians through parole because it keeps them from accessing benefits afforded to refugees.

"They're inventing this new approach through parole, which provides no security, no safety net and so that's worrisome and leaves the applicant at the mercy of the backlog and broken asylum system if they want to stay here permanently," said Mark Hetfield, president and CEO of HIAS, a refugee resettlement organization.

The challenge some Ukrainians face in getting to the US through an existing legal pathway is reflected in part on the US-Mexico border. There, hundreds of gathered to enter the US through a port of entry and potentially be paroled into the United States.

"What we do on an individualized basis is evaluate whether a Ukrainian family and frankly other families from other countries qualify for our discretionary authority of granting humanitarian parole," Mayorkas said.

US Customs and Border Protection has sent additional officers to the San Ysidro port of entry, near the Mexican border city of Tijuana, to help with processing, according to the agency.

For those already in the United States, the Department of Homeland Security extended a form of humanitarian relief -- known as Temporary Protected Status -- to allow Ukrainians to stay in the US without fear of deportation if they fall out of that status. Lawmakers asked Biden to extend that status to recent arrivals, as well. Currently, Ukrainians had to have been in the US since March 1 to be eligible.