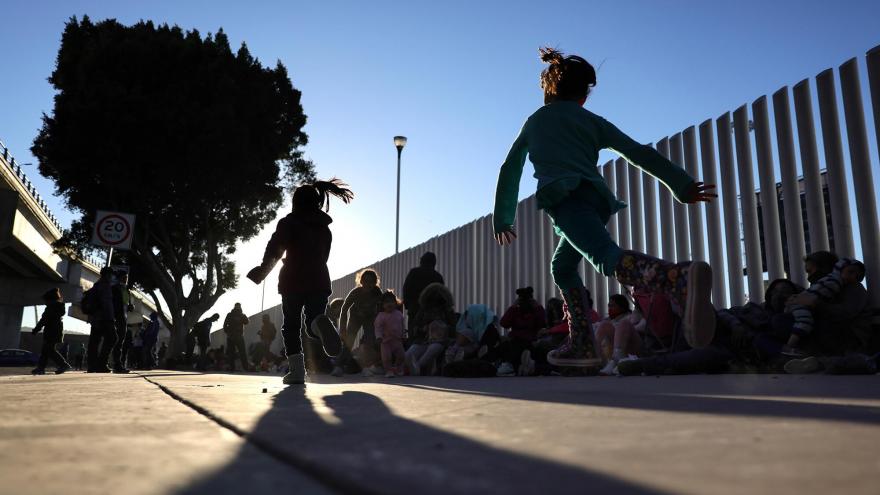 The Biden administration is preparing to expand the phased entry of migrants who were forced to stay in Mexico under a Trump-era policy. This image shows El Chaparral border crossing on February 19, in Tijuana, Mexico.

(CNN) -- The Biden administration is preparing to expand the phased entry of migrants who were forced to stay in Mexico under a Trump-era policy to two additional ports of entry, the Department of Homeland Security told CNN on Friday.

"Beginning next week, after registering virtually and being tested for COVID-19 at staging sites in Mexico, approved individuals with active (Migrant Protection Protocol) cases will be processed at the Hidalgo, TX port of entry," the department said in a statement, adding that processing will also start in Laredo, Texas, thereafter.

The effort is specific to migrants who fall under the so-called remain in Mexico policy. Three other locations have already been allowing the entry of migrants under the program.

Under former President Donald Trump, the US forced migrants from Central America and other parts of the world who were seeking asylum at the southern border to stay in Mexico until their immigration court hearings in the US. More than 70,000 people were subject to the program. Many waited months, if not years, in squalid conditions and under the threat of extortion, sexual assault and kidnapping.

President Joe Biden ended the program, formally known as Migrant Protection Protocols, and kick-started the process of allowing gradual entry of those subject to the policy. For months, officials meticulously planned the rollback of the policy and engaged with immigrant advocacy organizations along the border that have directly worked with migrants.

The Biden administration has since estimated that some 25,000 migrants still have active cases. That group will be eligible for the first phase of the rollback. The administration started the gradual entry of migrants at three ports of entry -- in San Diego and in El Paso and Brownsville, Texas -- last month.

As part of the endeavor, a tent camp in Matamoros, Mexico -- where hundreds of migrants stayed in deplorable conditions after being subject to the Trump-era policy -- was drawn down, a DHS spokesperson told CNN earlier this month.

International organizations are assisting with the process in Mexico. After an individual registers virtually and is confirmed as being eligible to enter, they're asked to approach a staging location 24 hours in advance of their crossing date. At the staging location, migrants are tested for Covid-19. If someone tests positive, they'll be put in quarantine for 10 days. Individuals must test negative before coming to the US.

"Physical presence at a port of entry is not the way to gain access to this phased effort. The United States is continuing to strictly enforce existing immigration laws, as well as COVID-19-related travel and border restrictions," the department said in a statement.