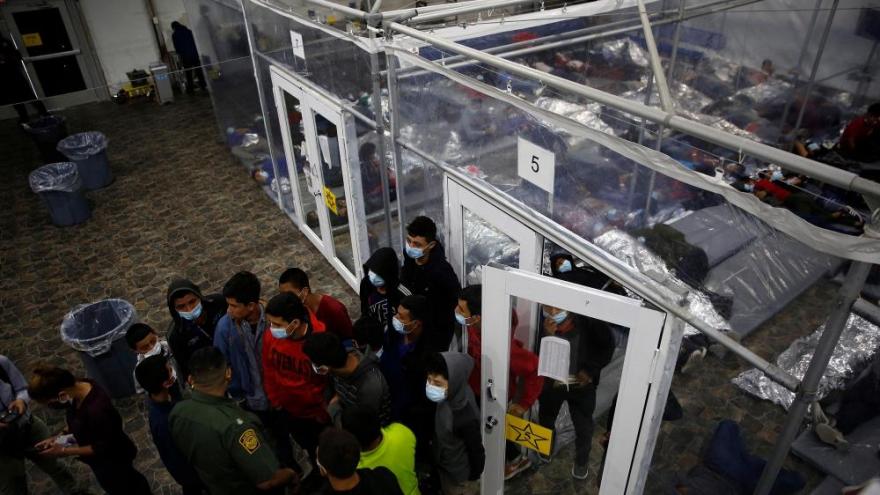 Young minors talk to an agent outside at a pod in the Donna Department of Homeland Security holding facility, in Donna, Texas, on March 30.

(CNN) -- The Biden administration plans to speed up court cases for recently arrived migrant families who are seeking asylum, the Department of Homeland Security announced Friday.

The move is reminiscent of previous attempts to quickly hear cases under the Obama and Trump administrations. At the time, immigrant advocates and attorneys raised concerns over rushing asylum cases and undermining due process. A Homeland Security official stressed, however, that the key difference now is that families will have early and ample access to legal representation and judges will not be subject to strict time constraints.

"The mission of the Department of Justice's immigration courts is to decide the cases that come before them promptly and fairly," said Attorney General Merrick Garland in a statement. "This new program for certain newly arriving families will help achieve that critically important goal."

Immigration judges are expected to issue decisions within 300 days of the master calendar hearing, barring unique circumstances, according to the administration. The DHS official said the department, along with DOJ, is "making a concerted effort to provide families who are placed on the docket with early access to information services and support services, and the administration will work closely with pro bono legal services providers to maximize legal representation."

The docket will apply to certain migrant families apprehended at the border on or after Friday.

The administration continues to face a growing number of migrant families arriving at the US-Mexico border. In April, US Customs and Border Protection apprehended 50,016 migrant families at the US southern border, according to the latest available data. Many families continue to be swiftly expelled under a Trump-era public health order that the Biden administration has continued to lean on, but others have been processed into the United States.

Immigrants fighting deportation generally have a chance to make their case in court, where they can ask a judge to allow them to stay in the US by arguing they qualify for asylum or another legal option. Cases can often take months, if not years, because of an immigration court backlog, prompting the effort to set up a process intended to expeditiously work through cases.

"Families arriving at the border who are placed in immigration proceedings should have their cases decided in an orderly, efficient, and fair manner," Secretary of Homeland Security Alejandro Mayorkas said in a statement. "Families who have recently arrived should not languish in a multi-year backlog; today's announcement is an important step for both justice and border security."