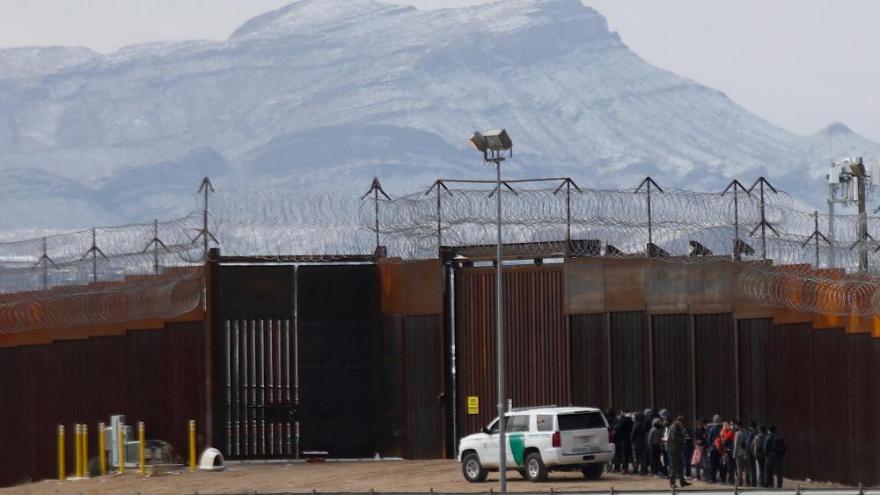 Border Patrol agents detain a group of migrants near the border wall, after they entered the United States from Ciudad Juarez, Chihuahua state, Mexico, border with El Paso, Texas, US, on February 3.

(CNN) -- The Biden administration is planning to end Trump-era pandemic restrictions on the US-Mexico border by May 23 that have largely blocked migrants from entering the US, according to three US officials.

The US Centers for Disease Control and Prevention is finalizing its assessment of the public health authority, known as Title 42, according to CDC spokeswoman Kathleen Conley, and is expected to announce a decision this week on whether to repeal, modify or extend the authority.

The Biden administration has been under mounting pressure from Democrats and immigrant advocates to end the public health authority, which critics say was never justified by science and puts migrants in harm's way.

Former President Donald Trump invoked the authority at the onset of the coronavirus pandemic, a move that was immediately met with skepticism by immigrant advocates, public health experts, and even officials within the administration who believed it to be driven by political motivations. Yet the Biden administration continued to lean on Title 42 despite objections from its allies.

According to US Customs and Border Protection data, there have been 1.7 million migrants sent back to Mexico or their origin country since March 2020.

The handling of the US-Mexico border is a politically precarious issue for President Joe Biden ahead of the midterm elections as Republicans hammer the administration over its immigration agenda. Over the last year, Biden has already grappled with an influx of unaccompanied migrant children and a surge of migrants in Del Rio, Texas, that resulted in thousands of people under a bridge.

If the order is lifted, it is expected to have immediate ramifications. Homeland Security Department officials are preparing for a worst-case scenario of up to 18,000 people trying to cross the border daily, a number sure to overwhelm the already full border facilities.

"The nature and scope of migration has changed fundamentally," one DHS official told reporters Tuesday.

The end of the Trump-era pandemic restrictions would mean a return to traditional protocols, which might include releasing migrants into the US while they go through their immigration proceedings, detaining migrants, or removing them if they don't have an asylum claim. Migrants who are released into the US may be enrolled in alternative to detention programs for continued monitoring.

As part of the planning, DHS is also lining up contracts for transportation to move migrants apprehended at the border to intake, setting up additional facilities for processing, and bolstering personnel on the ground. The administration has already started to offer Covid-19 vaccines to migrants encountered at the US southern border.

"This what we do at DHS. We plan for all kinds of contingency events whether they're high probability or low probability," another Homeland Security official said.

Tens of thousands of people at US-Mexico border

Between 30,000 to 60,000 people are estimated to be in northern Mexico waiting to cross the southern US border, according to a federal law enforcement official.

Intelligence assessments have found that people are in a "wait and see" mode and trying to determine when they have the best likelihood of entry into the US, the official said, adding that some of the 30,000 to 60,000 people could seek entry within hours if the CDC rule is repealed.

The White House has held interagency meetings about the intelligence and the situation more broadly, the official said.

"The key is whether (migrants) perceive whether they have a higher likelihood to be successful," the official said.

Border arrests are expected to soon reach 1 million in total, months before the end of the fiscal year, US Border Patrol Chief Raul Ortiz said Tuesday. Those figures also include repeat crossers.

Among the challenges for officials is the change in demographics arriving to the US southern border. About 40% of migrants taken into custody are coming from countries other than Mexico and the Northern Triangle countries of Guatemala, Honduras and El Salvador, according to a Homeland Security official.

"I think it's important that as we're dealing with an increased flow right now that we get in front of this as much as we possibly can," Ortiz said.