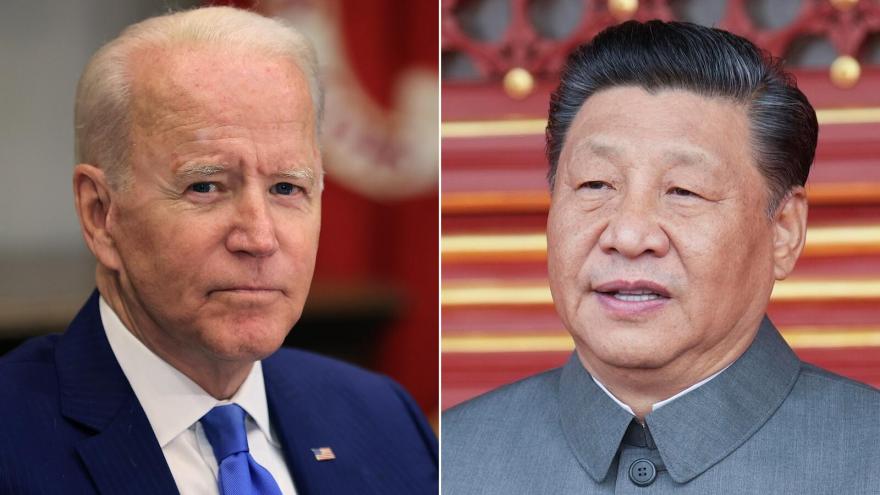 The Biden administration is examining the possibility of setting up an emergency hotline with the Chinese government similar to the so-called "red phone" established between the US and the Soviet Union during the Cold War, which allowed for direct communication with the Kremlin as a way to avert nuclear war.

(CNN) -- The Biden administration is examining the possibility of setting up an emergency hotline with the Chinese government similar to the so-called "red phone" established between the US and the Soviet Union during the Cold War, which allowed for direct communication with the Kremlin as a way to avert nuclear war.

While the concept is still in its infancy and has yet to be formally raised with the Chinese, the Biden administration wants to develop a rapid communication tool that could be folded into a broader effort to reduce the risk of conflict between the US and China, according to a US official and another source familiar with early conversations about the device.

A hotline to Beijing would let President Joe Biden, or top officials on his national security team, immediately send encrypted phone calls or messages to President Xi Jinping or those around him, according to the two sources. For example, urgent information could be shared about sudden military movements or warning messages sent about cyber hacks.

The idea of setting up a hotline with Beijing dates back to at least the Obama administration, though the concept wasn't codified into a classified national security memo until the final year of the Trump administration, according to a source familiar with the memo.

Biden administration officials have continued to pursue the idea, sources said, but there remain numerous details to work out, including whether the Chinese would even agree to use the device. There have long been issues with securing rapid responses from Beijing when it comes to urgent matters, current and former US officials told CNN. The top-down nature of the Chinese political system means that most contact beyond leader-level engagement is disincentivized.

A similar hotline to China already exists at the Pentagon and is supposed to be used exclusively for military matters but rarely is.

"We do have a hotline. It's known to have, the couple of times we've used it, just rung in an empty room for hours upon hours," said Kurt Campbell, the senior National Security Council Indo-Pacific coordinator, earlier this year during a conversation about US-China diplomacy and Taiwan.

The issues with the current system coupled with China's increasingly offensive military have led to mounting concerns among US national security officials about the potential of miscalculation with China, and a feeling that more needs to be done to increase communication.

"There is a worrisome shortage of tools for incident management in the US-China relationship. It is pretty urgent that the US government pursues working lines of communication which allow them to respond to a crisis or to prevent a crisis. We need a 911 operator so to speak," said Danny Russel, a former assistant secretary at the State Department. Russel added that it is imperative to also consider tools "that can be integrated into a wider crisis communication strategy, with the focus on broad risk reduction."

A senior administration official declined to discuss the device when asked about it but did say that "generally speaking, of course we have an interest in ensuring that competition with China is managed in a responsible way. We have been clear this relationship will be defined by competition and we welcome that stiff competition, but we will also continue to work to ensure this competition doesn't veer into conflict."

Working out the technical details

Officials at the State Department and the National Security Council are still working on how the device would technically work, sources told CNN. The next step would be developing the overall concept and working it into the Biden administration's plan for engagement with China. Then the device would need approval from the White House and from Chinese officials before being implemented.

While the "red phone" between the US and Russia was viewed as a useful tool that increased communication during the Cold War, its recent effectiveness is questionable. For example, the Obama administration used the hotline to the Kremlin to warn Russia not to interfere in the 2016 US elections, a warning that was not heeded.

The efficacy of a new hotline with China would be highly dependent on Beijing's commitment to using it and placing it in a position where Xi would have regular access to it.

"There would be advantages to setting up this kind of tool for high-level messaging with China on strategic cyber concerns, but you have to make sure it is connected to the right place in the chain to connect with leadership effortlessly and quickly," said Chris Painter, former State Department coordinator for cyber issues under President Barack Obama. "You may not get information back that you want, but it could be used to send messages back and forth to put people on notice."

Trouble with timely responses from China

In recent years the US and other countries have been unable to secure timely responses from China on pressing issues. For example, in the last year it has been challenging to get answers from China surrounding Covid-19, US officials said.

"There are challenges when it comes to reaching Chinese officials during times of difficulty. That is largely because the way their system works is top down. During the early days of the Covid-19 outbreak, we often did not get any response to critical questions," said a former US official who served in Beijing.

In 2014, China's state-owned oil company dispatched an oil rig to a contested area of the South China Sea and they would not respond to calls from Vietnam to discuss the matter.

The idea of connecting the White House and Beijing has been loosely discussed for years, but implementation had always seemed far off.

"We discussed the idea of a cyber messaging system with Chinese officials during the Obama administration. It was brought up in the context of our cyber discussions, but we did not make much progress. It was not clear where it was going to be placed in China, and China did not have the same history of confidence-building measures with the US that Russia did, so they viewed it in a more suspicious way," said Painter. "But I think now they understand more about how it could be used. It is not a silver bullet, by any means, but it does give you a useful tool."

On the whole, the Biden administration has said it plans to keep open lines of communication with China, though the early encounters have been tense.

During the Biden administration's first face-to-face with Chinese officials earlier this year, the two sides traded diplomatic barbs rarely seen in front of the cameras. While national security adviser Jake Sullivan said Biden's "priorities and intentions" were clearly laid out, both sides walked away without scheduling follow-up meetings or setting up any working groups.

When asked about a future meeting between Biden and Xi, the White House has not given any details.

"The administration is doing some hard thinking about what it is they really would want to pursue and how they foresee making headway on engagement with China. They have been careful and smart not to prematurely rush into full-scale engagement with China," Russel said.

And as the administration develops its diplomatic approach, former US officials say that merely setting up a new hotline won't be enough.

"Strategic risk reduction can be good, but up to a point, akin to basic hygiene. The central issue is that Beijing is hostile, predatory and highly capable, so the US must organize to defend and push back across the board. The Biden administration has said that they plan to do that. So while setting up a phone line can be useful, we shouldn't sink too much significant into it," said David Feith, a former State Department official who worked on China during the Trump administration.

As the China challenge mounts, Biden officials have publicly recognized the difficult nature of that challenge, and how much work it will take to address it.

"Do I think it's possible that the United States and China can coexist and live in peace? Yes, I do. But I do think the challenge is going to be enormously difficult for this generation and the next," said Campbell at an event last week.