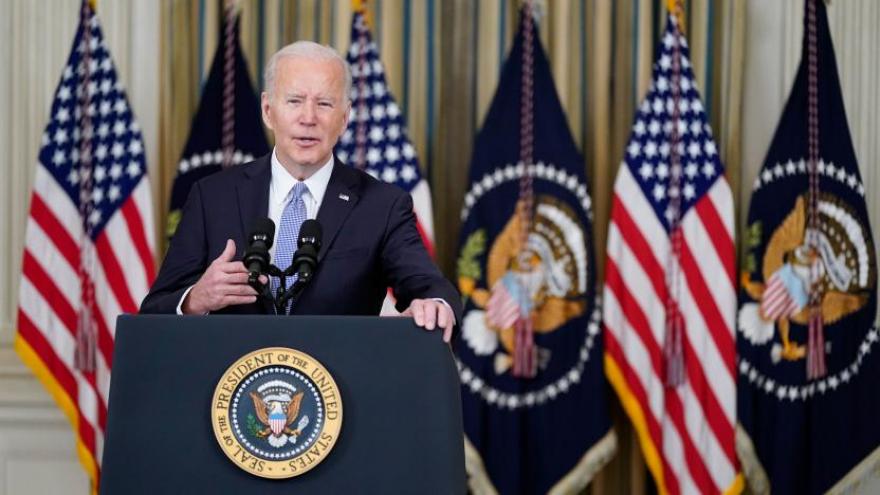 The US announced new sanctions on Russian financial institutions and individuals, including Russian President Vladimir Putin's two adult daughters, as it aims to increase economic pressure on Russia and Putin himself following horrific images from the Ukrainian city of Bucha.

(CNN) -- President Joe Biden declared "major war crimes" were being discovered in Ukraine as Russian forces retreat from areas around Kyiv, citing scenes of brutal, cold-blooded executions as rationale for ratcheting up US sanctions on Moscow.

"Responsible nations have to come together to hold these perpetrators accountable," Biden told a union crowd in Washington as the White House announced new sanctions on Russia's largest financial institutions and number of individuals tied to the Kremlin, including Russian President Vladimir Putin's two adult daughters.

"We will keep raising the economic cost and ratchet up the pain for Putin and further increase Russia's economic isolation," Biden said, decrying the intentional targeting of civilians by Russia and heralding a united Western response, even as he acknowledged the battle was still ongoing.

Horrific images from the Ukrainian city of Bucha imparted "a sense of brutality and inhumanity left for all the world to see, unapologetically," Biden said in his remarks as he announced new steps the US was taking to punish those responsible.

The sanctions are designed to tighten the vise on Russia's economy, which has been kneecapped by Western punishment. Still, ever-harsher consequences for the invasion of Ukraine have not appeared to force Putin to ease a brutal campaign that has increasingly targeted civilians.

Biden has previously said he believes Putin to be a war criminal, and this week called for a trial to hold Moscow accountable. Still, the process for prosecuting war crimes is complex and lengthy, and questions remain about how and when such accountability could be delivered.

And Secretary of State Antony Blinken said Sunday the US was "working to document" war crimes with the goal of providing the information to relevant agencies.

White House national security adviser Jake Sullivan also said this week the US would seek information from intelligence services, eyewitness Ukrainians, international organizations and interviews in the global media to build a case.

Biden praised Ukraine on Wednesday for sustaining a fight against Russia that prevented it from taking the country's capital.

"Thanks to the bravery, the grit and the fighting spirit of the Ukrainian people Russia has already failed in its initial war aims. Russia wanted to take Ukraine's capital city Kyiv and topple its democracy and elected government. Today, Kyiv still stands and that government presides," Biden said.

But he cautioned the violence may not end soon.

"The fight is far from over," he said. "This war could continue for a long time."

Sberbank holds nearly one-third of Russia's total banking sector assets, and the White House says that with Wednesday's sanctions, more than two-thirds of the Russian banking sector are now blocked.

"The sad reality is Putin's war will make it harder for Russians to travel abroad. It means their debit cards may not work. They may only have the option to buy knockoff phones and knockoff clothes, the shelves at stores may be empty," a senior administration official told reporters.

"The reality is the country's descending into economic and financial and technological isolation and at this rate, it will go back to Soviet-style standards from the 1980s," the official went on.

In targeting Putin's two adult daughters, the US hopes to freeze any assets the Russian President may be hiding with them, according to the senior administration official. Without detailing which of Putin's assets could be hiding with Mariya Putina and Katerina Tikhonova, the official said the practice was common among the Russian elite.

Members of Russia's Security Council, including former President and Prime Minister of Russia Dmitry Medvedev and Prime Minister Mikhail Mishustin, are also being targeted by individual sanctions. The US has already sanctioned more than 140 oligarchs and their family members and over 400 Russian government officials, the senior official said.

"Look, these oligarchs and their family members are not allowed to hold on to their wealth in Europe and the United States and keep these yachts worth hundreds of millions of dollars, their luxury vacation homes while children in Ukraine are being killed, displaced from their homes every single day," Biden said in his speech.

The new sanctions will cut those individuals off from the US banking system and freeze any assets held in the United States.

The White House also announced a ban on new investment in Russia that will be executed in alignment with the G7 and EU. The ban will be implemented with an executive order signed by President Joe Biden.

While the US and its allies have imposed the most sweeping sanctions regime targeting a country of the size of Russia in history, officials acknowledge it has done little to shift Putin's calculation. The threat of the sanctions didn't deter the invasion itself, and the piling on of economic penalties hasn't brought Russia any closer to a withdrawal or negotiated settlement since.

Pressed about the efficacy of sanctions in ending Putin's war in Ukraine, the senior official sought to underscore the effect they are having on life in Russia and said Putin would eventually have to reckon with his people.

"Even an autocrat like Putin has a social contract with the Russian people. He took away their freedom in exchange for promising stability, and so he's not giving them stability," the official said.

"The question really is not so much: What can we do and when will that have an effect? I think it's: What's the endgame here for Putin? What's he playing for?" the official said. "This is very clearly becoming a failure for him and at some point he will have to recognize that reality."