US places up to 8,500 troops on alert for possible deployment to Eastern Europe amid Russia tensions 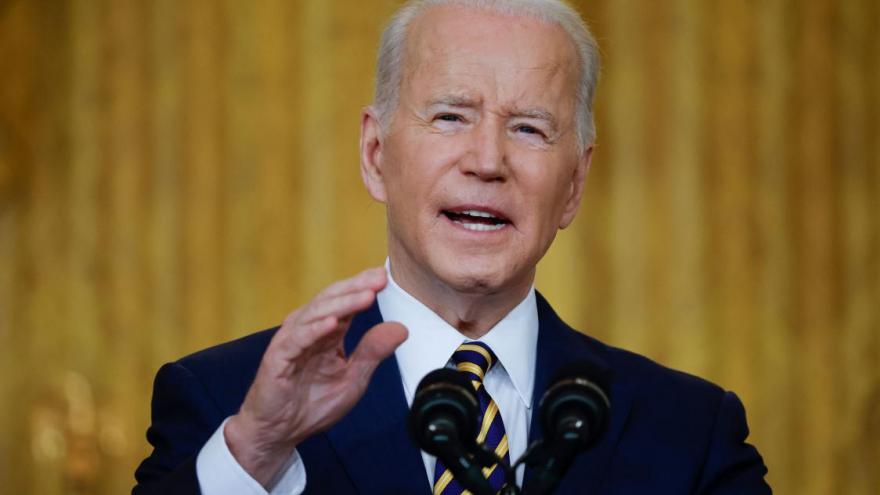 The Biden administration is in the final stages of identifying specific military units it wants to send to Eastern Europe and writing up the military orders in an effort to deter Russia, according to multiple US and defense officials, and pictured President Joe Biden, on January 19, in Washington, DC.

(CNN) -- As many as 8,500 US troops have been put on heightened alert for a possible deployment to Eastern Europe as Russian troops mass on Ukraine's border, Pentagon spokesman John Kirby said Monday.

US Secretary of Defense Lloyd Austin issued the prepare to deploy orders at the direction of President Joe Biden, the latest step the US has taken to prepare for a potential Russian invasion of Ukraine that officials have warned could be imminent.

Kirby said that the "bulk of" US troops placed on heightened alert were intended to bolster NATO's quick response force, but added they would be "postured to be ready for any other contingencies as well."

As of Monday afternoon, no final decision to deploy the troops had been made, Kirby emphasized.

"The United States has taken steps to heighten the readiness of its forces at home and abroad, so they are prepared to respond to a range of contingencies, including support to the NATO response force if it is activated," Kirby said. He noted the NATO Response Force "comprises around 40,000 multinational troops."

Earlier on Monday CNN reported the Biden administration was in in the final stages of identifying specific military units it wants to send to Eastern Europe, according to multiple US and defense officials.

Biden discussed options for bolstering US troop levels in the Baltics and Eastern Europe with his top military officials during a briefing at Camp David on Saturday, according to a senior official.

The goal of sending military reinforcements to Eastern Europe would be to provide deterrence and to reassure allies, and there's been no suggestion US combat troops would deploy to Ukraine or take part in any combat roles. Kirby noted the US does have military advisers in Ukraine.

Kirby would not say where the US troops might deploy, but said the US has "made it clear to the Eastern flank allies that we're prepared to bolster their capabilities if they need it."

"In the event of NATO's activation of the NRF or a deteriorating security environment, the United States would be in a position to rapidly deploy additional brigade combat teams, logistics, medical, aviation, intelligence, surveillance and reconnaissance, transportation and additional capabilities into Europe," Kirby said.

The news comes amid US warnings that a potential Russian invasion of Ukraine could be imminent. The State Department on Sunday reduced staffing at the US embassy in Kyiv, Ukraine, with the departure of nonessential staff and family members out of "an abundance of caution."

Biden held an 80-minute secure video call with European leaders on Monday afternoon, which the White House said was part of the administration's consultation and coordination with European allies in response to Russia's military buildup.

Biden told reporters at the White House there was "total unanimity" with European leaders on the call. "I had a very, very, very good meeting," Biden said.

A White House readout of the call said the leaders discussed "preparations to impose massive consequences and severe economic costs on Russia for such actions as well as to reinforce security on NATO's eastern flank."

Following the virtual meeting with the leaders of the US, France, Germany, Italy, Poland, the United Kingdom and the European Union, NATO Secretary General Jens Stoltenberg said, "We agree that any further aggression by Russia against Ukraine will have severe costs."

Biden and his national security team have been refining military plans "for all scenarios," including the option of sending troops to Eastern Europe ahead of a potential Russian invasion of Ukraine, the White House said Monday.

White House press secretary Jen Psaki said a decision to increase US troops could come ahead of Russian forces moving across the Ukrainian border, but said such a move did not amount to a shift in Biden's thinking.

"We have never ruled out the option of providing additional assistance in advance of an invasion. Those discussions have been ongoing," she said.

Last week, Biden said during a news conference, "We're going to actually increase troop presence in Poland, in Romania, et cetera, if in fact he moves."

But Psaki said Biden had never ruled out sending additional US troops before an invasion. "That's been part of our contingency planning," she said.

The US sent two weapons shipments to Ukraine over the past week as part of recently directed security assistance to help bolster Ukraine's military. NATO countries are also sending additional ships and fighter jets to Eastern Europe and putting forces on standby, Stoltenberg said in a statement Monday.

"NATO will continue to take all necessary measures to protect and defend all Allies, including by reinforcing the eastern part of the Alliance," he said.

US and UK reduce embassy staffing in Kyiv

The Ukrainian Defense Ministry's latest intelligence assessment found that Russia has now deployed more than 127,000 troops in the region, while US officials have said Russia is in a position to launch an invasion at any time.

Ukrainian President Volodymyr Zelensky said in a video address Monday that Ukrainian citizens have "no reason to panic" as authorities are "working for the full de-escalation of the situation" in eastern Ukraine.

US officials still don't know what Russian President Vladimir Putin plans to do, or if he has decided to invade Ukraine. But some officials who have seen the intelligence say there is evidence Russia is planning to try to take Kyiv and overthrow the government, as CNN has previously reported.

The UK foreign office said in a statement on Saturday that it has information the Russian government is planning to "install a pro-Russian leader in Kyiv as it considers whether to invade and occupy Ukraine."

Kirby said Monday that Russia continues to add "battalion tactical groups" to the border with Ukraine and in Belarus. "They have not only shown no signs of de-escalating, but they are in fact adding more force capability," he said.

Moscow denies it is planning to invade, accusing the US and NATO of escalating tensions over their support for Ukraine. The Kremlin on Monday dismissed the reports about plans to install a pro-Russian leader in Ukraine as "hysteria.

"Tensions are escalating due to concrete actions taken by the US and NATO," Kremlin spokesman Dmitry Peskov said. "I mean, the informational hysteria that we are witnessing. It is generously framed by a huge amount of false information, just lies and fakes."

State Department officials told reporters Sunday that the decision to reduce staffing at the embassy was not due to any change in threat levels to US personnel in the country. The officials said the move to reduce embassy personnel and urge Americans in the country to leave was in part because State Department assistance would be "severely impacted" if there is Russian military action in Ukraine.

The Marine Corps has bolstered security at the US Embassy, according to a senior Marine Corps official. The additional Marines came from the Marine Security Guard Security Augmentation Unit and were deployed "recently," said the official, who would not specify exactly when they had arrived or how many had been sent.

According to Defense Department workforce data, 30 Marines were based in Ukraine as of September 30. Most, if not all, of them would be handling embassy security, a Marine Corps mission. The other services have only a total of 14 members based in Ukraine.

About 150 members of the Florida National Guard are deployed in Ukraine to assist in training the country's military forces.

The Pentagon has also said that US Special Operations Command Europe has a "large" role in training Ukrainian special forces, though officials would not disclose how many special forces are in Ukraine. Those troops are not based in Ukraine but temporarily deployed there to assist in training.

In addition to the US reducing staffing at its embassy in Kyiv, the UK Foreign Office also announced Monday that some British Embassy staff and dependents were being withdrawn in response to growing threats from Russia.

The US is continuing to engage diplomatically with Russia, but recent talks have failed to bring about any breakthroughs. Russia has said that the US and NATO must commit to never admitting Ukraine into NATO and pull back military deployments from Eastern European counties, including Romania and Bulgaria. The US has said repeatedly these demands are a non-starter, though Secretary of State Antony Blinken said last week the US would respond in writing to Moscow's demands following his meeting with Russian Foreign Minister Sergey Lavrov.