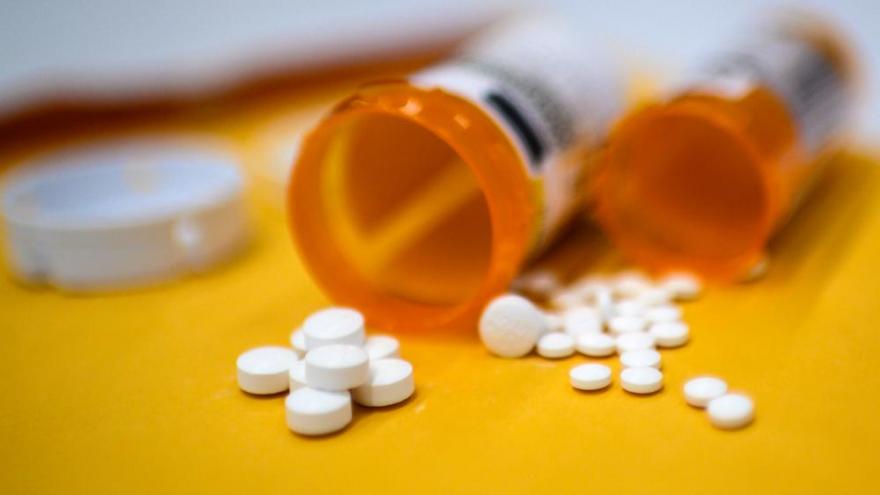 More Americans are dying from drug overdoses. Pictured is the prescription painkiller Oxycodon.

(CNN) -- With a growing number of Americans dying from drug overdoses and concerns over addiction rising, the Biden administration has found itself facing a nationwide crisis that keeps escalating as the Covid-19 pandemic drags on.

On the campaign trail, Biden presented a comprehensive plan to address the opioid epidemic, but his public advocacy on the issue has largely fallen by the wayside as he focuses his presidency on his legislative agenda and the coronavirus pandemic. Now, more than halfway through Biden's first year in office, as National Recovery Month comes to a close, his administration is facing calls to do more to stave off the crisis.

RELATED: Labor Secretary Marty Walsh opens up about his sobriety as the nation faces addiction crisis during Covid-19 pandemic

So far, among the administration's efforts, the White House has proposed historic investments to address the overdose crisis in its fiscal year 2022 budget request. And major funding for Biden's ambitious legislative goals, which includes landmark funding aligned with the White House's drug policy agenda, continues to be negotiated between the White House and Congress.

But experts say even more needs to be done to address the pandemic's impact on addiction.

More than 93,000 people died from drug overdoses in 2020, according to preliminary data from the US Centers for Disease Control and Prevention, making last year the deadliest on record for drug overdoses. American adults' alcohol consumption appears to have increased during the pandemic, too, with nearly 1 in 4 adults reporting drinking more to cope with their stress in one American Psychological Association poll.

Regina LaBelle, the acting director of the White House Office of National Drug Control Policy, underscored in an interview with CNN that overdose deaths were "already increasing before the pandemic and it was exacerbated during the pandemic."

Covid-19 has caused complications across the board, including shaking traditional support systems to help people recover from addiction. When the pandemic began, access to treatment and community programs changed drastically. Meetings for programs like Alcoholics Anonymous moved to Zoom. Individuals isolated in their homes. Capacity in addiction treatment facilities decreased.

The pandemic also sparked a mental health crisis that may have led more people to self-medicate with drugs and alcohol, experts say. People modified how they dealt with illness and death to prevent the spread of Covid-19, sometimes being barred from family members' hospital bedsides or being left unable to grieve at funerals in person. And many struggled with job insecurity or confronted the possibility of health hazards on the job.

Dr. Stephen Taylor -- an Alabama-based physician who serves as the chief medical officer of Pathway Healthcare, which has outpatient addiction treatment offices across the South -- said he sees people responding to the stress of the pandemic with increased substance use. He also pointed out that across the country, "people who don't even have a substance use disorder have increased their drinking."

"What we're experiencing more so in Alabama than perhaps in other parts of the country is just the stress of the pandemic -- distress of so many people who are getting sick and who are being hospitalized and dying," Taylor pointed out. "Many people respond to that with increased substance use."

More work to do

Across the spectrum, experts also say there's much more work to be done by the Biden administration, particularly in fighting the spread of fentanyl, an extremely potent synthetic opioid.

Jim Carroll, who was the director of the White House Office of National Drug Control Policy during the Trump administration, expressed concern about the influx of fentanyl seizures at the southern border, comparing the drug to a "weapon of mass destruction."

"I think that's one of the ways we have to sort of approach this issue," he said.

"The prevention side of this is so key, but we just need to know that drugs are not coming into our country. We cannot have a porous border for drugs," he added. "That's really key in order for what ONDCP wants to accomplish ... reduce the drugs that are on our streets."

The administration also continues to face the challenge of an influx of illicitly manufactured fentanyl showing up throughout the drug supply, LaBelle said.

"And that is why we're seeing increasing rates of overdose deaths involving methamphetamine and cocaine. It's because fentanyl is everywhere. Where someone is using illegal drugs, it is likely that there is fentanyl in that drug," LaBelle said.

Overdose deaths involving methamphetamine, for example, nearly tripled from 2015 to 2019 among people ages 18 to 64, with many of these deaths involving use of an opioid at the same time, according to a study by the National Institute on Drug Abuse.

There are areas where observers say the Biden administration is falling short of what the President discussed on the campaign trail.

Maritza Perez -- the director of the Office of National Affairs at the Drug Policy Alliance, a nonprofit that says it aims to advance policies that best reduce the harms of drug use and drug prohibition -- argued that while candidate Biden brought up "clemency, the need for revisiting our drug laws, that nobody should serve time for drug activity, (and) that he would prioritize racial justice" on the campaign trail, his administration has done little to address those concerns.

Some groups have also been at odds with the administration's proposal to permanently schedule fentanyl-related substances, known as fentanyl analogues. The substances have been temporarily designated under Schedule I, the same drug tier that includes heroin and ecstasy, since 2018.

But Perez said the Biden administration's proposal to permanently schedule the analogues, which would not apply mandatory minimum sentences except in instances of death or bodily harm related to trafficking of the substance, "is not enough."

"Not all fentanyl analogues carry the same effect," Perez said. "Some are actually helpful, especially when we're talking about opioid addiction and overdoses caused by opioids. So that is really problematic. It sets ... a new standard for drug scheduling, but also a new standard for criminalization."

The American Society of Addiction Medicine, where Taylor is on the board of directors, is urging the White House to support a number of measures in its 2022 National Drug Control Strategy, due to Congress early next year.

Taylor emphasized the importance of funding proposed in the House's sweeping $3.5 trillion spending bill. Democrats had originally settled on that top-line figure, but some Senate moderates in the party have indicated that they will not support such a high number.

"We recognize that would be the most significant piece of legislation for people with substance use disorder, literally since the passage of the (Affordable Care Act)," Taylor said, adding that it's "also an opportunity to really advance equity."

The spending bill includes a provision to provide incarcerated individuals with Medicaid in the lead-up to their release from prison, a major step that advocates argue will help an extremely vulnerable population gain access to mental health and substance use treatment, possibly preventing recidivism. The spending proposal would also extend the child tax credit, but its inclusion could be on the chopping block.

Addressing the addiction epidemic on a federal level

Experts across the political spectrum are encouraged by some aspects of the Biden administration's approach to the overdose issue.

Perez said she credits the Biden administration for using the term "harm reduction" in public statements and saying the federal government supports such measures.

"That's never happened before. So the fact that they're saying that we need to support people, meet them where they're at, make sure that people are consuming drugs safely. They didn't say that. But that's essentially what harm reduction is -- it's making sure that people have the tools they need to safely consume drugs. And, you know, that within itself is historic. We haven't seen anything like that," Perez said.

Experts lauded efforts to exempt health care providers from certification requirements to be able to prescribe buprenorphine -- a drug used in combination with behavioral therapy to treat opioid use disorder.

The administration has also lifted a moratorium on a mobile component to opioid treatment programs, making it easier to get treatment to more isolated communities. And experts underscored the significance of the nearly $4 billion in funding made available through the American Rescue Plan to expand access to mental health and substance use disorder services, which included $30 million toward harm reduction services.