Biden administration extends immigration relief to Afghans in the US 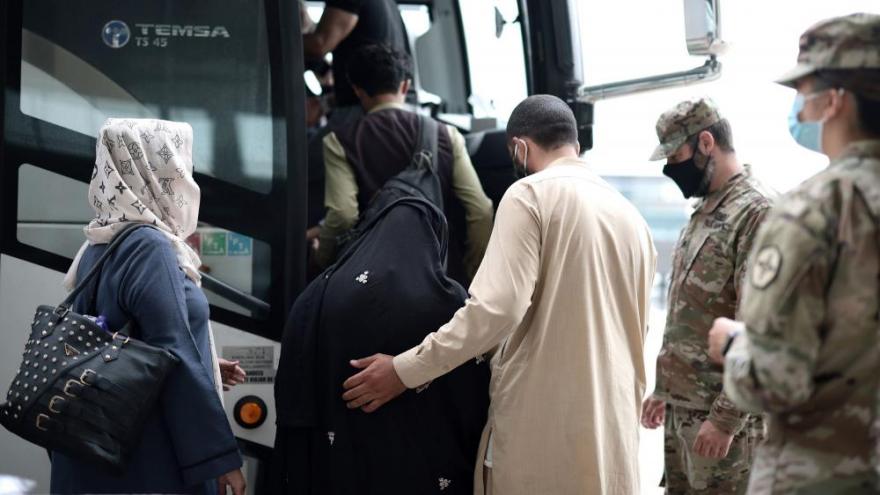 The Biden administration extends immigration relief to Afghans in the US. Afghan refugees here board a bus at Dulles International Airport on August 31, 2021 in Dulles, Virginia.

(CNN) -- The Department of Homeland Security will allow Afghans who are in the United States to remain in the country under a form of humanitarian relief, the department announced Wednesday.

The relief, known as Temporary Protected Status, applies to people who would face extreme hardship if forced to return to homelands devastated by armed conflict or natural disasters, therefore the protections are limited to people already in the United States. The DHS secretary has discretion to designate a country for TPS.

The US resettled more than 76,000 Afghans evacuated from Afghanistan. Most of those evacuees were paroled into the US for a period of two years and received work permits. They may be eligible for TPS if they don't secure a legal status before that two-year period expires.

"This TPS designation will help to protect Afghan nationals who have already been living in the United States from returning to unsafe conditions," DHS Secretary Alejandro Mayorkas said in a statement. "Under this designation, TPS will also provide additional protections and assurances to trusted partners and vulnerable Afghans who supported the U.S. military, diplomatic, and humanitarian missions in Afghanistan over the last 20 years."

Mayorkas took the ongoing armed conflict, economic crisis, food and water insecurity, and a collapsing public sector in Afghanistan into account in extending relief to Afghans, according to DHS.

To be eligible for TPS, individuals must have continuously resided in the US as of March 15, and the TPS designation will be in place for 18 months. The designation may apply to Afghans who were already in the US prior to the evacuation and the thousands brought to the US after the fall of Kabul.

US Citizenship and Immigration Services estimates that around 74,500 individuals in the United States would become eligible for TPS through the designation of Afghanistan, according to DHS. That includes 72,500 Afghan evacuees who had been paroled into the US and around 2,000 Afghan nationals who were already in the US, like students.

Afghanistan joins a list of 13 countries, including Ukraine, South Sudan and Venezuela, that have also been designated for TPS.