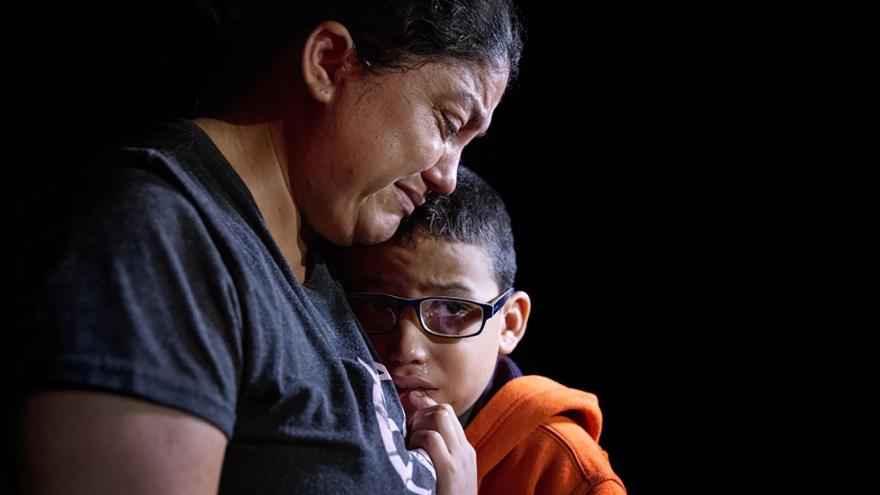 The Biden administration plans to coordinate with nongovernmental organizations to identify vulnerable migrant families in Mexico and allow them to enter the United States. An immigrant mother and son are shown after completing their monthlong journey from Honduras to the US on April 14, 2021, in Roma, Texas.

(CNN) -- The Biden administration plans to coordinate with nongovernmental organizations to identify vulnerable migrant families in Mexico and allow them to enter the United States, instead of turning them away under a Trump-era border policy, according to a source familiar with discussions.

The administration has been facing fierce criticism for relying on a public health authority, known as Title 42, that was put in place under the Trump administration in early 2020 at the onset of the coronavirus pandemic. The policy allows border officials to expel migrants encountered at the US-Mexico border. Immigrant advocates argue it has put migrants in harm's way, leaving many, including those seeking asylum, in dangerous conditions in Mexico. In some cases, families have opted to separate from their children, since unaccompanied migrant children are not subject to the policy.

On Thursday, Democratic Sen. Jacky Rosen of Nevada told Homeland Security Secretary Alejandro Mayorkas, who's defended the policy, that she remains "concerned about the continuation of Title 42, that policy that the Trump administration used to expel migrants across the board, including children and families desperately attempting to come here for our asylum process."

The administration's move appears designed to quell those concerns by addressing more families who are deemed exceptions to the policy. The latest plan is kicking off on a pilot basis, the source said, adding that families will be put in immigration proceedings.

"As the United States continue?s to enforce the CDC Order under its Title 42 public health authority, we are working to streamline a system for identifying and lawfully processing particularly vulnerable individuals who warrant humanitarian exceptions under the order," said Sarah Peck, a Department of Homeland Security spokesperson.

"This humanitarian exception process involves close coordination with international and non-governmental organizations in Mexico and COVID-19 testing before those identified through this process are allowed to enter the country," she added.

The public health order remains the subject of litigation. Since February, plaintiffs in a case concerning families being subject to the order have been in negotiations with the government.

Some exceptions have been made to the policy, including exempting 35 families daily who are referred by the American Civil Liberties Union to be admitted to the United States.

"The Title 42 order has always had an humanitarian exemption for especially vulnerable individuals and it is critical that the exemption process work efficiently through the ACLU process and the new consortium of global NGOs," said Lee Gelernt, lead attorney in the litigation over the public health order.

The approach is similar to one taken by the administration earlier this year to process migrants who had been subject to the "remain in Mexico" policy. That Trump-era policy forced asylum seekers to stay in Mexico until their immigration court dates in the US. The administration has similarly collaborated with international organizations to help identify and process thousands of migrants into the US with active cases under that policy. Migrants processed through that program are tested for the coronavirus before being allowed entry into the United States.